Back at Red Hat Summit and DevNation we announced that we were working with IBM, TomiTribe, Payara and LJC (and now SouJava!) in an upstream community effort to gain experience on best practices for developing microservices using Java EE, which we called the MicroProfile. Obviously our own efforts around WildFly Swarm fed into these discussions and we've been actively participating in the forum discussions ever since. Now at DevNation we committed to agreeing on a 1.0 version of our project, i.e., what those baseline (minimum) EE components would be for developing meaningful microservices, before JavaOne. At the time we thought it would be JAX-RS, JSON-P and CDI but we really wanted wider input from users and developers. We got a lot of input and I encourage anyone who hasn't joined the group yet to do so if you want to help influence the collaborative efforts.

Well the good news is that we finished 1.0 a few weeks ahead of schedule with 6 different implementations! You can read more about the announcement but the obvious question is what next? Technically Java EE still has a lot more to offer microservices and we've been discussing these on the mailing list, including JPA, JTA (yes, I think transactions have a role to play!), Bean Validation and Concurrency Utilities, to name but four. We need to look at extensions to these efforts, or things which go beyond where they currently sit. For example CQRS is important for more advanced microservices developers. Monitoring, logging and tracing in a distributed system is critical on a number of fronts, not least of which is debugging performance problems and errors, so we need to do more here. One of my pet favourites around microservices is the move towards reactive and asynchronous, as epitomised by projects like Vert.x. It's much more than just making JAX-RS a bit more asynchronous so we have a bit of a slog here to make improvements in Java EE components/standards; maybe we'll decide it just isn't worth it and we need to look at defining new things from scratch.

I could go on and on with some of the technical things I believe we need to look into next, including service discovery, components from Netflix OSS, CDI annotations for things like circuit breakers and of course language level features such as JDK 8 Lambdas and Streams, or Java 9 modularity, but you can find more details at the official announcement blog. I will point out one other thing though: we've got to move away from just assuming HTTP is the only way microservices communicate. Yes, HTTP is convenient, but a text-based protocol is not the way to go if you want high performance. HTTP/2 helps, as will WebSockets (yes, more benefit from Java EE) but we need to look at messaging solutions (not just JMS). Oh and fault tolerance, reliability and security are other areas we need to focus on - it's going to be busy so get involved and help us break this down into smaller challenges!

Of course there's more than the technical aspects to consider. We now believe we have something worthy and useful in MicroProfile 1.0. We've always talked about standardisation once we have gained enough experience - that's where standards bodies work really well. This is something we need to discuss in the community, as with everything else we've done so far, but my personal opinion is that we are ready to move MicroProfile 1.0 to a standards body. Which standards body is again open to discussion, but it would seem logical for the JCP to play a role here since at the moment we're based entirely on Java EE. Get involved! Give your own opinion. Finally, we're going to move the existing MicroProfile effort to a Foundation. Discussions are on going (yes, again in the upstream forum) but I think we're close to a decision and should be able to announce something real soon now! Stay tuned!

OK that's it for now. It has been a great community effort around MicroProfile since we announced it only a few small months ago. My thanks go out to everyone who has contributed in a small or large way, no matter which company you work for or if you're an individual contributor. It all helps us to understand where enterprise Java microservices need to head. Please keep involved and help us shape the future of the industry! And if you're around at JavaOne ... 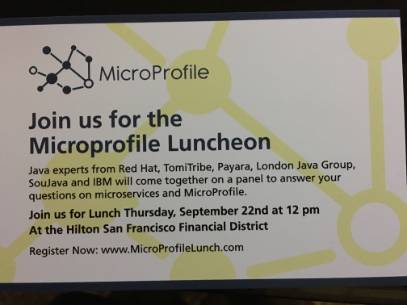