This document completes and further qualifies the original JBoss Messaging Core Specification. If you are not familiar with the Core Specification, you should start by reading it (http://wiki.jboss.org/wiki/Wiki.jsp?page=JBossMessagingCore) and then return to Revision 1.

The channel state does not physically contain the messages whose states it represents. A message state includes a message reference, which maintains attributes such as messageID, expiration time, etc. The message itself is stored in a message store, which returns the corresponding message reference (see Section 3. "Message Store"). 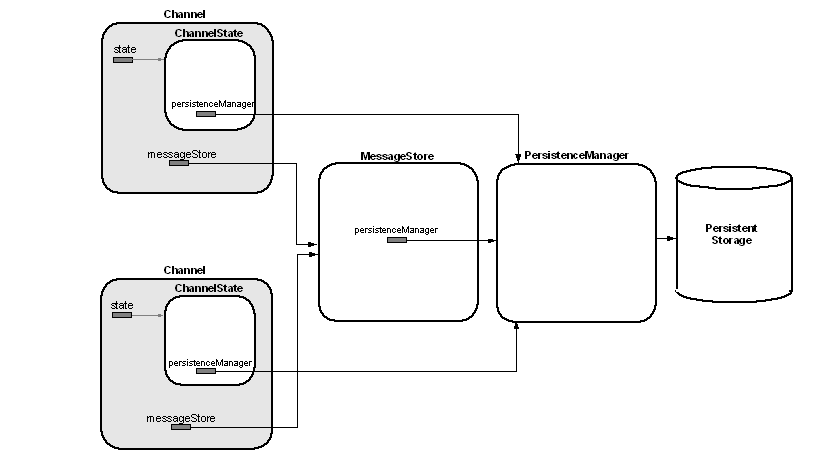 The ChannelState was formerly known as AcknowledgmentStore in the previous version of the specifications.

It should be possible to transactionally modify the state of a message. A channel state implementation must offer support for transactional message handling or clearly indicate that is not able to provide this functionality.

The state of a channel is maintained by an implementation of the ChannelState interface:

The responsibilities of a message store instance are:

A channel must have access to a message store in order to delegate the conversion and the physical storage of the messages in transit. A message store can be shared by multiple channels co-existing in the same address space, allowing the channels to pass to each other message references instead of messages. This configuration avoids the necessity of handling messages with large bodies, which leads to performance improvements.

An message store implementation must offer support for transactional message handling or clearly indicate that is not able to provide this functionality.

A distributed Message Core configuration requires a distributed message store implementation. Such an implementation will help convert message references back to the original messages at destination, even if the source and destination channels are not in the same address space.

The state of a message being processed by an asynchronous channel is part of the channel's state. This paragraph describes the internal representation of a message state, as maintained by the channel state. From this perspective, a message can be not in channel, NOT_COMMITTED, NEW or DELIVERED. 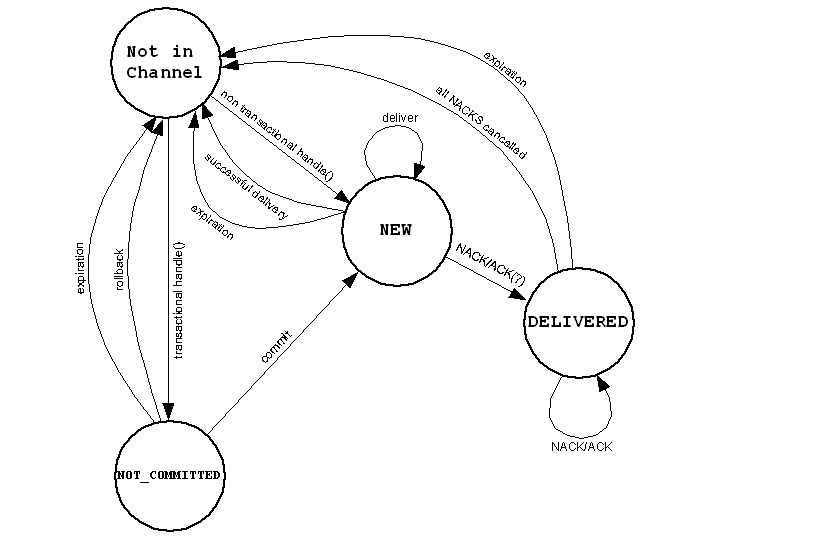 The transaction ID is maintained as an attributed of the NOT_COMMITTED state.

TODO: Can a message be part of multiple transactions at the same time, relative to the same channel?

The channel state maintains a message as NOT_COMMITTED when the message is passed as argument of Channel.handle() in a transacted context.

A message ceases to be NOT_COMMITTED in the following situations:

A message is in a NEW state if the message was accepted by the channel, but the channel has not delivered the message to any receiver yet. Examples of situations when delivery is not possible or desirable are:

There are no attributes to further qualify this state.

A message transitions to a NEW state in the following situations:

A message ceases to be NEW in the following situations:

5.2.4 Channel behavior in the presence of undeliverable NEW messages

If a channel has no receivers, or all existing receivers do not accept the message, a specific channel implementation may choose between two possible outcomes:

The first situation is common for a Point to Point messaging domain. A queue holds a message even if there are no receivers. The second situation is common for a Publish/Subscribe messaging domain. A topic discards a message if there are no receivers, but also positively acknowledges the message. Since this is an arbitrary choice, the channel must let its senders know what to expect in this situation. (See Section 7.3 Channel.isStoringUndeliverableMessages()).

The DELIVERED state maintains a Set of receiver IDs for all receivers that negatively acknowledged the message. Since the channel state manager should allow transactional message state updates, a mechanism to logically record an acknowledgment (positive or negative) and then commit it should be available.

A message becomes DELIVERED only by transition from a NEW state, on delivery, when the channel receives at least one negative acknowledgment.

An outstanding negative acknowledgment can be canceled in the following situations:

A Channel does never take the initiative of redelivering a DELIVERED message. It is the receiver that negatively acknowledged the message that must explicitly requests the redelivery via Channel.deliver(Receiver r).

There are at least two solutions to this problem:

It is not possible to receive an early asynchronous positive acknowledgment if there is no corresponding NEW message in the channel. This should be handled as an error. If an as early acknowledgment is received for a NEW message, this should change the message state to DELIVERED.

A channel can receive the acknowledgment for a message either synchronously at delivery and asynchronously.

A channel synchronously receives a positive or negative acknowledgment  when it attempts to deliver a message to a receiver using Receiver.handle().

Positive acknowledgments can be submitted transactionally:

The method returns true if the channel is able to transactionally handle messages and acknowledgments.

The semantic of this method changes as follows: the channel attempts delivery for all NEW messages available at the moment of the invocation. After completion, the method returns false whether the channel still holds NEW messages that could not be delivered or true otherwise. The method does not interact with NOT_COMMITTED or DELIVERED messages. Invoking deliver() on a channel that has no NEW messages should return true.

The method requires a Receiver reference and not a receiver ID because it should be possible for a receiver to demand the redelivery of the negatively acknowledged messages even after it has been disconnected from the channel. For a disconnected receiver, providing just the receiverID is not enough to get a reference to the receiver.

TODO: What happens if in between invocations new NEW messages appear? Will they be delivered together with the previously negatively acknowledged messages or not?

ChannelSupport is an abstract class that implements Channel and offers protected functionality that should be available to all Channel implementations. It exposes protected convenience methods that do not belong to Channel public interface.

The implementation of the hasMessages(int) method can be optimized if the channel maintains cached flags per message state.

A receiver must be able to selectively reject a message, even if it is connected to the sender and it is available for handling.

A sender should be able to find out in advance whether a receiver would accept a certain message or not. This is possible by invoking the Receiver's method accept(Routable r). If the method invocation returns true, the receiver declares its availability to handle the message and return a positive or negative acknowledgment. It is expected that a receiver will delegate the decision whether to accept or not a message to a Filter implementation. However, a Receiver implementation may choose to accept a message or not using a different mechanism.

The Receiver interface changes as follows

A possible problem with using the filtering extension of the Receiver interface is that the receiver may change its state between the accept() invocation and the handle() invocation. Even if accept() returns true, handle() could be invoked on a receiver that does not accept that specific message anymore. There are several solutions to this problem, two of them being presented below.

Provide additional locking and unlocking methods for Receiver. A possible sequence of calls in this situation would be the following:

This solution is potentially dangerous because it allows external code to lock a Receiver and this may lead to a situation when the lock is never released. It also leads to cumbersome code.

Another solution (preferred) would be to pass the locking responsibility to the receiver, and have handle() method throw a RoutableNotAcceptedException checked exception.

Even if this solution is chosen, accept() method remains useful. It allows the sender to check in advance receiver's willingness to handle the specific message without being forced to actually attempt the delivery of the message.

9.1.2 If messages are submitted to the channel on two different threads of control, in the same address space and in sequential order (the first thread had exited channel.handle() at the time the second thread enters it), the channel guarantees that the message received on the first thread will be delivered to eligible receivers before the message received on the second thread.

9.1.3 The delivery order of two messages submitted to the channel on concurrent threads, even if in the same address space, is unspecified.

9.1.4 The delivery order of two messages submitted to the channel in different address spaces is unspecified.

A channel preserves the order of the messages sent within the boundaries of the same transaction. If two messages M1 and M2 are sent to the channel in a transaction, in this order, they will be delivered to all eligible receivers in the order (M1, M2) when transaction commits.

The order guarantees specified so far are only valid for messages in the same reliability class. If a reliable message M1 is submitted to the channel before an unreliable message M2, the delivery order of messages M1 and M2 is undefined. There is no guarantee that the channel's receivers will receive M1 before M2.

The order guarantees specified so far are only valid for message within the same priority group.

The order guarantees specified so far are only valid for first time delivery. If two messages M1 and M2 are received by the Channel in this order but they are negatively acknowledged by a receiver, the order (M1, M2) is not guaranteed at redelivery.

The partial order guarantees specified above should be sufficient to use channels as base for a JMS compliant implementation, without need for additional message order enforcement. If a messaging system based on JBoss Messaging Core needs stronger order guarantees (such as total order), it should be relatively easy to add those guarantees to a Channel extension.

Routable interface will be changed to implement java.lang.Comparable. The total ordering relation between Routable instances will reflect their priority.