A Simulator instance effectively simulates a JChannel instance. Multiple simulator instances can be used to simulate the interaction of multiple JChannels. One key advantage of using the Simulator for testing protocol stacks is that protocol layers can be tested in isolation.

Messages are never transported across a network. Instead, an Event which reaches the bottom of the stack is placed onto a send_queue. A send_thread continuously polls the send_queue, removing messages

In order to make use of multiple simulators, the simulators must be initialized with the following:

Schematic of a protocol under test wrapped by a Simulator instance (enclosing dotted rectangle represents a Simulator object instance). 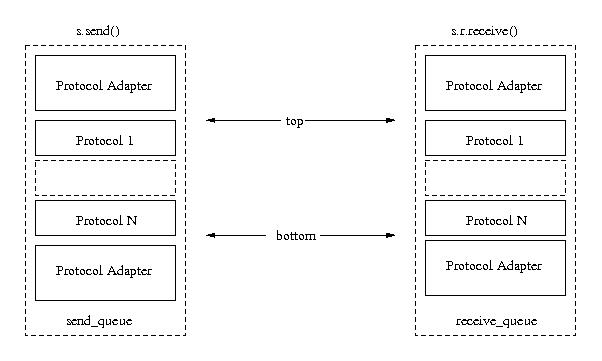 See the test case FCTest.java for an example of using the Simulator to test the FC protocol in isolation.

Extension to simulation of failures

In its present state, messages are transported from one JChannel (Simulator instance) to another by the send_thread, which moves messages from send_queue to recv_queue in a reliable fashion. Futhermore, all Simulators perform at the same speed.

We would like to use the Simulator to additionally simulate failures, in order to check the robustness of the protocols:

For example, each Simulator could have methods associated with it which could be used to dynamically modify its behaviour during a test:

In the case of simulating network problems, a Transport class could be used which drops/corrupts/reorders specific messages in a predicatble and repeatable fashion - by making use of state machine descriptions of faulty behaviour. The send_thread could then simply call transport.send() to take messages from send_queue and pass them to other JChannels (simulators). The recv_thread could similarly call transport.recv(). All fault injection would be confined to the Transport class.

In the case of simulating slow processes, send_threads and receive_threads could have delays built in to make them appear to be slow.