Wireshark is a freely available, open source network protocol analyzer (www.wireshark.org) which permits the capture and analysis of packets exchanged between processes over a network. 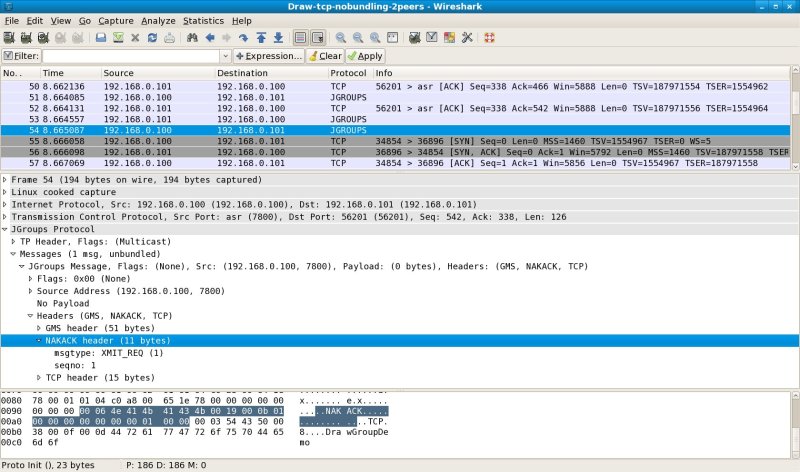 Where to get the plugin

The dissector is available in two forms: plugin source code only, or binary versions of wireshark with the plugin installed.

The dissector source, sample JGroups capture files and instructions for installing the plugin into a source version of Wireshark can be downloaded from the JGroups SourceForge cvs server:

Replace the variable $PLUGIN_SOURCE with a directory of your choice. This repository contains dissector source, sample JGroups capture files and instructions for installing the plugin into a source version of Wireshark (downloaded separately).

Binary versions of Wireshark containing the plugin can be obtained at http://sourceforge.net/project/showfiles.php?group_id=6081&package_id=282049

Versions will be made available for Window XP and Fedora. Creating binary versions for other OSs can be achieved using the plugin source.

This version is packed as a Fedora version-dependent srpm. The rpmbuild command can be used to rebuild an architecture-specific binary version using the following steps:

1. Set up an rpm directory structure to support the build

Choose a base directory $BASEDIR to which you have write access (e.g. BASEDIR=/home/myuserid) and create the following directory structure:

Once the directory structure is created, create a file in /home/myuserid called .rpmrc containing the line:

This directs rpm and rpmbuild to use the created directory structure in place of the default /usr/src/redhat (to which you may not have write access!).

2. Use the buildrpm command to build the binary packages from the source package:

NOTE: before installing, ensure that previous versions of Wireshark are uninstalled, as the binary version of the plugin will install into the same filespace locations.

For example, on Fedora:

2. Once the Wireshark UI is displayed, you may set preferences by visiting

In particular, you may want to allow debugging fields to be displayed in the wireshark session.

3. Use File->Open to open a sample capture file (for example, as included in the plugin source distribution) and view the JGroups packets.