Design document for the next generation JBoss AS web tier load balancing architecture.

See here for the discussion forum related to this document.

A new Apache module, "mod_cluster" will be created, based on the existing mod_proxy module. See JBNATIVE-53 for details.

On the AS side, a new ModClusterService will be created. It will send cluster configuration and load balance weighting information to the httpd side via HTTP/HTTPS.

The ModClusterService will be made aware of how to contact the httpd side via static configuration; there will be no dynamic discovery of httpd instances. (The list of httpd instances could, however, be changed at runtime via a management tool.)

We discussed two possible modes in which the ModClusterService could operate:

Here the AS instances do not exchange information amongst themselves. Think in terms of a group of AS instances running the "default" config, with no JGroups channel open.

In this mode, each AS instance directly communicates with each server on the Apache httpd side. The ModClusterService would be able to send messages to the httpd side regarding: 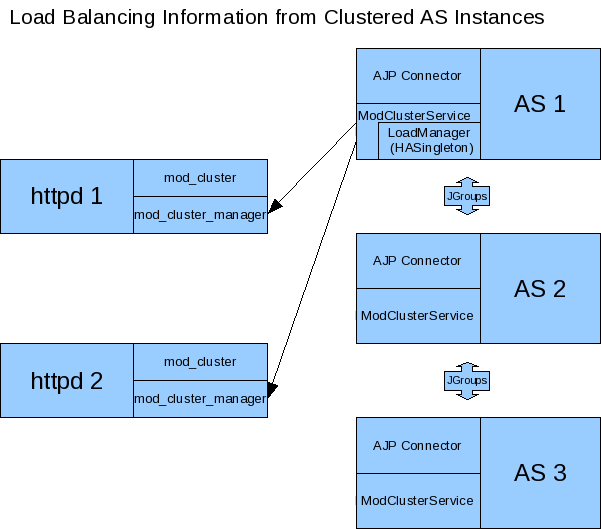 The AS instances would form a cluster (using JGroups) and could thus exchange various metrics that would be used in the load balance factor calculation.  ModClusterService would include an HASingleton component such that one member of the cluster would be responsible for collating these metrics, deriving the load balance factor for all group members, and sending that consolidated information to each server on the Apache httpd side.

Question: In this mode, would messages other than load balance factors be transmitted via the HASingleon member? My (BES) initial take on this is it seems simpler to restrict the HASingleton messages to load balance information.

Answer: That is probably enough. But it could interesting to see if a node of the cluster could "ping" htttpd.

Normal request traffic is passed from mod_cluster to the AJP connector in the normal, fashion; i.e. via AJP over a pool of long-lasting connections. 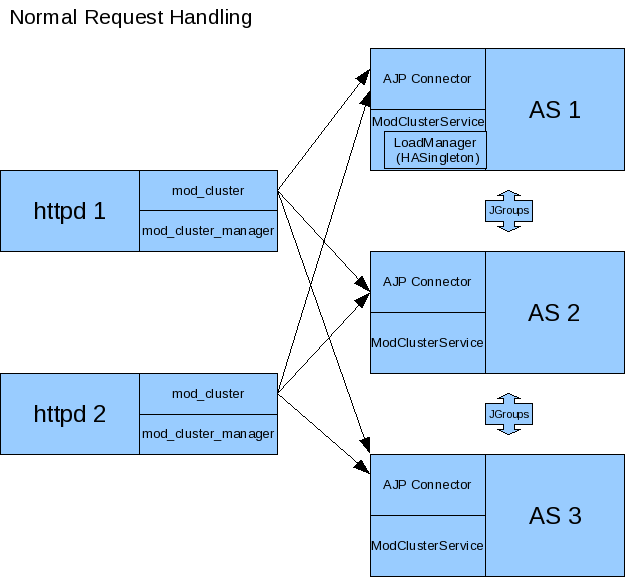 The specification of the communication protocol between the ModClusterService and httpd is the main detail area that needs to be hammered out between the AS clustering team and the mod_cluster side. Once that is done each side can proceed fairly independently.

Communication from ModClusterService to httpd will be done via HTTP or HTTPS. There is ongoing discussion of what HTTP method is most appropriate. GET can be fairly human-readable and is easiest to use via a CLI (e.g. telnet).  But, GET requests are limited by the 8 Kbytes4 bytes URL length limitation, and even it is unlikely that some requests would need to go beyond that length,  POST seems like a reasonable choice and there is currently discussion of using a WebDAV-like approach where we define custom request types (corresponding to the message types below). It is not easy to pass parameter values as HTTP headers rather because httpd logic will optimize them (app: /myapp

is transform while parsing into app: /myapp, /hisapp).

This communication would be over the regular port that httpd is listening on, with the request being internally handled by mod_cluster_manager based on a special context path mount in httpd.conf. Basically, something like

. What port to use depends on how httpd is configured.

Issue: Securing this mount is a bit trickier than the jkstatus case, which could often just be set to only "Allow from: 127.0.0.1".  Such a simple approach won't work here as a large number of AS instances will need to be able to communicate.

Solution:It is possible to have the SetHandler directive in a VirtualHost where SSL is mandatory.

Per node.  Initially provided by each node (or perhaps by the HASingleton) during the startup process for the node.

The "Connection Directives" and "Advanced Worker Directives" sections of the Apache Tomcat Connector - Reference Guide give a good description of the various options supported by mod_jk.

Question/TODO: Which if any of these are not available, given that the code base is mod_proxy not mod_jk?

Answer: See http://community.jboss.org/wiki/Mod-Clusternodeconf for a proposal for that stuff.

Question: My assumption is we'll support updating these values after the initial registration of a worker.

Answer: Those value will be stored in shared memory and should be used while processing new connections and new requests

Things like the mod_jk 'sticky-session' and 'sticky-session-force' directives. See the "Load Balancing Directives section in the Apache Tomcat Connector - Reference Guide for others.

Issue: If the ModClusterService is operating in "non-clustered" mode, it isn't clear who configures these.

Answer: In "non-clustered" mode, each AS instance will independently send this information, with any new data overriding the older.  It is the responsibility of the user to ensure that each AS instance has the same configuration for these global values.

Requests from ModClusterService notify the httpd side of lifecycle events: startup/shutdown of JBossWeb instances; deploy/undeploy of webapps.

Requests are sent via HTTP/HTTPS (80, 443); the exact HTTP request method is a subject of ongoing discussion.

Previous iteration also had ENABLE/DISABLE/STOP commands that applied to all apps on a node.  This usage can be handled by passing '' as the webapp name. A STOP message may still be useful as a signal to mod_cluster_manager to completely remove all configuration information for a node from memory. Perhaps a different name than STOP, e.g. REMOVE.

A detailed protocol proposal could be found in Mod-Cluster_Management_Protocol.

Responses to the above requests will contain something like:

It could interesting to have the following for some requests:

The purpose of the INFO message is to acquire the necessary information to understand the virtual hosts on the httpd side.  ModClusterService will need to analyze the names and aliases of the Host instances running in JBossWeb and correlate them to the appropriate httpd virtual hosts.

The ModClusterService will be based on a modular architecture, with as many points as possible pluggable and extendable.  Major components include:

We want full support for domains.

A domain is a way to group nodes that share sessions.

However, there are a couple different ways users might implement these; we need to think through how to handle both. In both cases a JGroups channel is used for session replication, with group membership limited to the members of the domain.  The question is how the JGroups channel used for intra-cluster ModClusterService traffic is set up:

The former seems pretty simple, and can generate more accurate load balancing factors, but the latter is probably preferable for users to configure.  To support the latter, we need to ensure the message protocol doesn't result in messages from one domain accidentally affecting another domain. For example:

Problem here is if there is a network partition disrupting intra-cluster JGroups traffic. Assume traffic between the httpd boxes and the AS instances is unaffected.  This will result in a situation where more than one HASingleton will be running, with each feeling the nodes in the other subcluster have died.  We need to avoid a situation where each HASingleton tells mod_cluster_manager to stop sending traffic to the other subcluster's nodes, with the effect that no nodes are available.

1. JBoss AS is started

2. Webapp is deployed on a started JBoss AS

8. Connectivity is lost between mod_cluster and a node (non-clustered case)

9. Connectivity is lost between mod_cluster and a node (clustered case, node is not HASingleton)

Remark: Without an asynchronous ping/pong this will cause QoS problems: The node will be marked UP and mod_cluster will forward new requests to it if the connectivity between mod_cluster and the node is still lost all those requests will timeout on connect and fall back to another node. See http://community.jboss.org/wiki/Mod-Clusterpingpong

10. Connectivity is lost between mod_cluster and a node (node is the HASingleton)