Starting with JBossWS-3.0, JBossWS provides a general web service integration layer. For the first time, our users have the choice to deploy one of three possible certified JAXWS stacks in JBoss AS 5 and JBoss AS 4.2.

The supported stacks are JBossWS Native, GlassFish Metro and Apache CXF. Since each stack comes with its own specific functional feature set and performance characteristics users are able to deploy the stack that best suits their needs. There is a common deployment model and management interface to all deployable stacks.

Over the next few months the JBossWS team will focus on advanced functionality such as WS-ReliableMessaging, WS-Trust, WS-AtomicTransaction, WS-BusinessActivity, etc. We would love to get your feedback on this topic this will help us to prioritize the integration work and hence provide you with a web service offering that combines the best of what is currently out there. 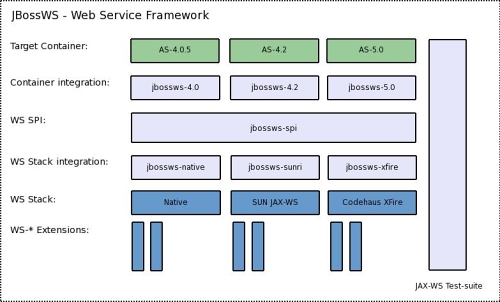 We are especially happy to hear that both the GlassFish Metro and Apache CXF community and project leads endorse this move and are committed to the success of their respective stacks in JBoss. Here is what they have to say ...

Quote: The GlassFish[1] community very much welcomes JBoss use of our Web Services stack (JAX-WS RI and Project Tango, now combined as Project Metro[2]) and we look forward to feedback and synergies with the expanded developer community,

Eduardo Pelegri-Llopart, Distinguished Engineer at Sun and overall lead of the GlassFish Community

Quote: We're excited that on the strength of the CXF project and its growing user base, the JBoss community has decided to incorporate CXF into its offerings for Web service integration. This move is indicative of the power of open source to drive innovation and speed the adoption of new technologies.

Quote: I'm very excited to see JBossWS take such a strong user and community centric approach. Many CXF users have been already been deploying inside JBoss due to CXF's unique capabilities and JBoss's strength as an application server. I'm excited to see this integration grow even deeper in future.