Skip navigation
All Places > JBoss AS 7 > JBoss AS 7 Development > Articles
Currently Being Moderated
This project is read only now. Read more.

(Note: this document includes embedded images, in image formats. At least the initial ones come from the MagicDraw tool; the underlying MagicDraw file is attached. Going forward this should end up in version control somewhere, perhaps in an sharable format like XMI.)

In this section, we define the logical representation of the domain management model. First an image, followed by some definitions 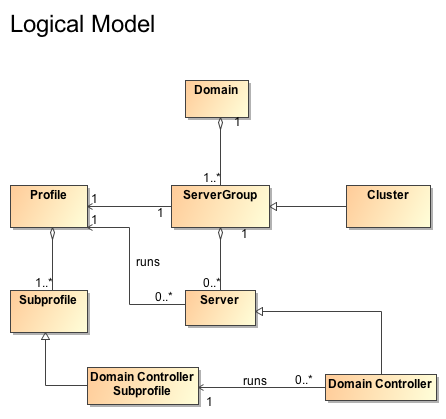 Following are definitions for items in the above model or related concepts, as agreed in various discussions. However, people are still welcome to challenge these.

This section focuses less on the logical model and more on how the runtime components of the model map to the physical infrastructure on which a domain runs. For more on how some of these concepts are going to be used, see this page on server lifecycle use cases. 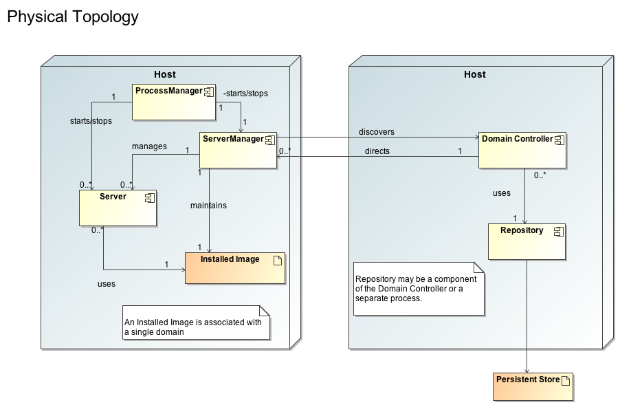 Following are definitions for  items in the above model or related concepts, as agreed in various  discussions. However, people are still welcome to challenge these.

A couple notes on the above image:

The above Physical Deployment section is oriented toward a more complex, multi-server topology. However, there is another significant type of use case that AS 7 needs to handle well: the single, standalone server that needs to be individually managed. Such a server would be appropriate for use cases where the end user does not want a complex managment infrastructure with separate domain controller and host controller processes:

Internally, the object model representing the domain configuration for a standalone server may be quite similar to that shown above. However, the XML configuration schema and perhaps the management API will be simplified to remove extraneous concepts like the ServerGroup. (Whether creating a distinct management API for this use case is appropriate needs discussion. A separate API means clients like JON and the embedded console need to be coded against two APIs in order to cover all use cases.)