The current approach of acquiring locks on all data owners, in order to assure consistency, is deadlock prone when multiple transactions access the same key concurrently.

Two transactions write on key “a” on nodes N1 and N2, at the same time. With the right timing RPCs can take place in the order indicated in the diagram below. Both 3 and 4 deadlock in this case: 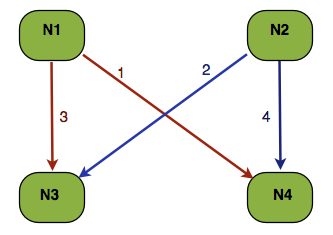 Disregarding the number of replicas (numOwners) to which we need to replicate the data,a single node is elected from these replicas to coordinate the lock acquisition. The election is made using the consistent hash function, the node responsible for coordinating lock acquisition being the main data owner.

Main data owner of a key is defined as follows: mainDataOwner(key) =  consistentHash(key).get(0).

After it acquires a local node, the main data owner is also in charge to propagate the changes to the remaining nodes. The diagram below depicts this scenario. 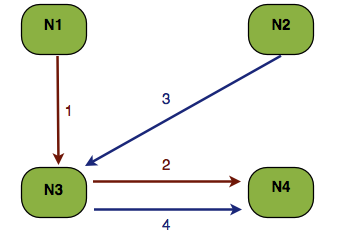 This section discusses the situation when 1 and 3 in the above diagram are transactions.

The JIRA that tracks this change in Infinispan is: ISPN-1137