Skip navigation
All Places > JBoss AS 7 > JBoss AS 7 Development > Articles
Currently Being Moderated
This project is read only now. Read more.

When an object is serialized using Java serialization, the format consists of a "class reference" and the field data of every field in all inherited classes. The class reference is simply a class name. The assumption is that the receiving party has all of the sender's class definitions readily accessible to the thread's current context class loader. This means very different semantics than those commonly expected in a normal in-vm invocation across class loader boundaries. In a modularized environment, it is not only common, but considered good practice to only share public API types and yet still pass internal implementation classes that back the API types across module boundaries. These "opaque" structures don't cause the VM a problem because the same physical, already constructed, object instance is being passed around.

However, with serialization there is no object instance. All fields of all types that make up an object need to be accessed to recreate the instance. Also since fields themselves may be references to other custom types, it is quite common for a large graph referencing numerous types to be on the wire, and thus have a need for visibility.

In this example a common super class is shared between a sender and a receiver, but an extended subclass used by the sender's implementation is mistakenly not shared. This case works just fine with local IN-VM invocations, but will fail once serialization is involved. 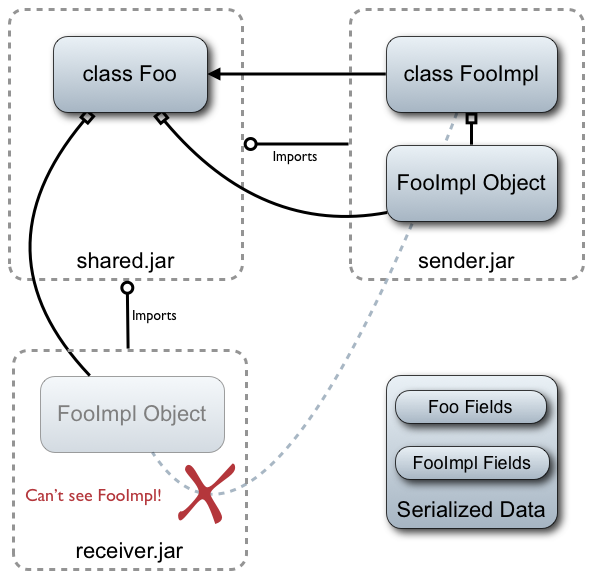 In this example a common class is shared between a sender and a receiver, but it contains a field which references a sender class that is mistakenly not shared. This case works just fine with local IN-VM invocations, but will fail once serialization is involved. 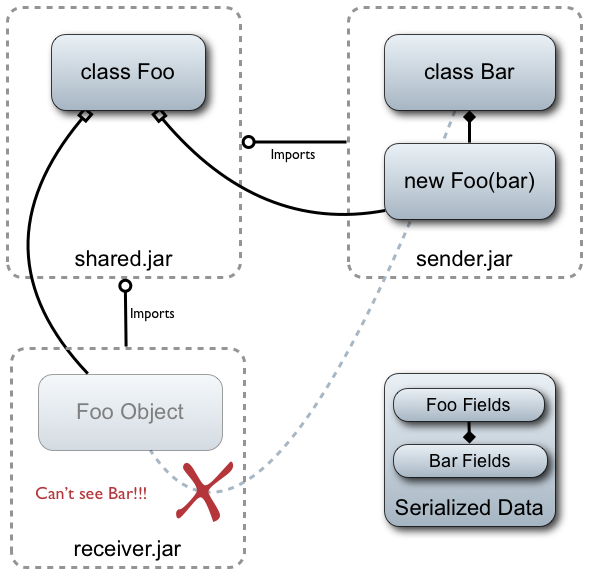 This complex example shows how the isolation properties of a module can reflect its ability to load its own serialized data. It's considered good practice (and actually the default in JBoss Modules, as well as other module systems) to not import a transitive dependency. This allows for an application to use independent versions of a module that will never conflict with a library used by one of the application's dependencies. In this example we have an application that is using a framework of some sort which controls the lifecycle of a class in the application (think IoC container, ejb, web container etc). As part of constructing the instance of the application's class Foo, it associates some internal class with the instance that it uses from a thirdparty framework that is of no interest to the application (it's just an implementation detail of the framework). 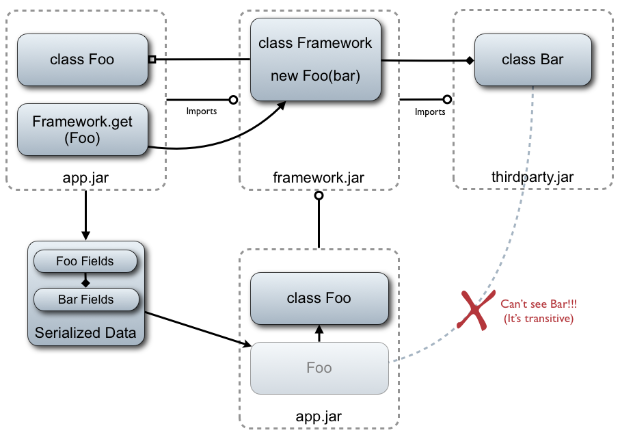 Possible approaches to use this solution with the above problems would be:

This solution is currently available using the ModularClassResolver like so:

This changes the format of the stream such that the owning module identifier is written in addition to the name of any class referenced in the stream. This allows jboss marshalling to easily locate the "correct" class loader for deserializing the class. The advantage of this approach is that application/component code need not be changed, and that the same practices used in local invocation also apply with remote serialization. The drawback is that the serialization format must be altered potentially introducing compatibility problems with older clients. In addition non-modular clients, if they need to be supported, will not understand the format. Solution 3 is the recommended approach when compatibility is a concern.

Also note this solution is only applicable to JBoss Modules. Although, you could add your own resolver that works with the modular framework of your choice (OSGi for example).

This is the same approach as 2 but adds the ability to handle both styles of streaming. This is achieved by either having the client ignore the information, or having some kind of negotiation process (protocol version etc).

This content has been marked as final.  Show 3 comments
Close