I'm just back from giving my keynote at JAX in Mainz. I have to say that the event was well managed and there were about 2000 people there to hear about all sorts of things Java related. The only downsides were the wireless network, which appeared to be non-existant most of the time, and that I came down with a (man) flu the day before I traveled and was definitely under the weather throughout my time at JAX. That's a shame because I really wanted to experience it and Mainz much more than I was able to in the end. However, despite this I managed to give my keynote and hopefully the fact that I had cold didn't come through and impact it. The subject of the keynote (is enterprise Java ready for mobile and cloud) is something I've spoken about before, but this time I updated the talk and went into more detail about some areas where Java and the JVM need to be improved. I got the impression during the talk that it was going well and certainly afterwards the feedback was unanimously positive. However, I'd timed it for 60 minutes, when in fact I only had 45, so the last few slides were a bit rushed. But despite that, I think the message came across: Java, the JVM and Java middleware, most certainly do have a role to play in mobile and cloud; as a Java community, the future is ours to lose, and as long as we can make the necessary changes, it should be a bright future. As I said at the end of the presentation, now is probably the most interesting time to be a Java developer with the exception of 1996 when Sun released it!

One thing that confused me when I arrived at JAX was that the program contained presentation abstracts in either English or German. I didn't understand why until I went to a couple of the sessions, and the rule was pretty simple: if the abstract was in German (even if the title was English), then the presentation would be in German (even if the slides were in English). Fortunately the German sessions I did go to were easy to follow via the slides, since my German is almost 30 years old and rarely practiced!

However, the thing that impacted me the most (quite literally) about JAX was the journey back to the airport. It started by my forgetting what time the flight was, so I had to grab a taxi instead of the train. Then I got into a teleconference as we headed down the autobahn at Break Neck mph. About half way through the teleconference (yes, Craig and Rob, it was the one we were in together!) a guy in front of us ran into the back of another car. The taxi driver slammed on his breaks and managed to stop before hitting the car in front - he didn't even need to swerve to prevent hitting. So I breathed a sigh of relief and then milliseconds later thought (and you're probably already ahead of me here!) "what about the cars behind us?!" Sure enough, one car slammed into the side of the taxi followed by another car hitting that car. So like I said, it had quite an impact! Fortunately no one was hurt, but the entire autobahn was closed. After the police arrived (one officer looking like Chris Hemsworth's Thor - you know, smiling nicely but with an undercurrent of 'don't &%^* with me or I'll smash you with my hammer') they sorted things out, but there was no way I was getting another taxi for quite a while. The clock was ticking and my flight wasn't going to wait for me. But another witness happened to be heading to the airport so he gave me a lift and I thank him very much!

If you're interested in seeing the carnage, then the taxi is the one closest to the central reservation (almost hidden in this view). What you can't see is the two other cars further down the road that caused the incident in the first place. 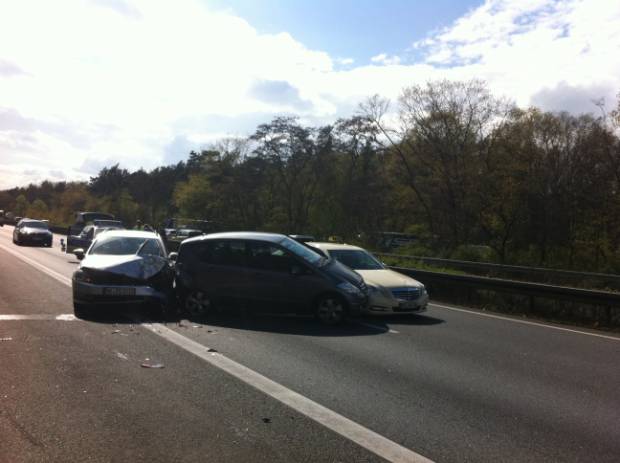 So all in all, JAX was a very good and interesting conference. But next time I think I can do without the excitement on the way back from the event! (I should also add that I continued on the teleconference throughout the crash, so I don't think anyone there noticed!)