I'm going to be giving the keynote at the Red Hat Developer Day in London in a couple of days time. You should come along and hear what we have to offer to developers and also what we'd like developers to help us with. I'll try and hang around as long as possible to speak to people, but unfortunately I'm actually on holiday this week and it's my wife's birthday the day of the event! So apologies in advance if I miss you this time around.

I'm just back from speaking at CLASS (Cloud Assisted Services) Conference in Bled, Slovenia, where I was asked to speak on the Red Hat vision on Cloud. Ales was also there talking about CapeDwarf and Trustin gave a tutorial on building applications on top of Infinispan. There were a lot of other speakers talking about their experiences and vision for Cloud, and it was good to meet some of them and see that our thoughts are in line with those of others. Unfortunately I was only able to spend a couple of days in the area and just one day at the conference, but it was still worth attending. Some areas of interest included listening to Ken Ducatel speaking about what the EU have planned in terms of security and authentication standards for all cloud vendors operating wthin the area, and then real world Cloud uses from Kate at Argonne National Laboratories and Christine from AmpLab.

But another important reason for attending the conference was that it was my first time in Slovenia and to meet the entire team based in the area. I was already impressed with the team (hey, they're JBoss engineers, so what else should you expect ?), but Slovenia was much more beautiful that I had expected. Upon reflection, if I'd done my homework or been awake on the flight from Paris to Ljubljana airport, I'd have seen much of this from the air. However, I didn't and it was a very pleasant surprise. I hope to have further opportunities to visit the area in the future and next time I'll spend more than a couple of days! 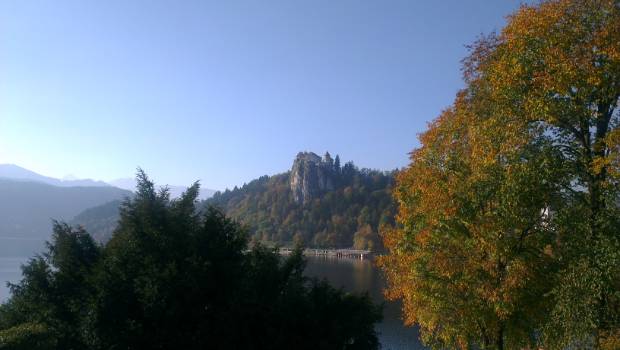 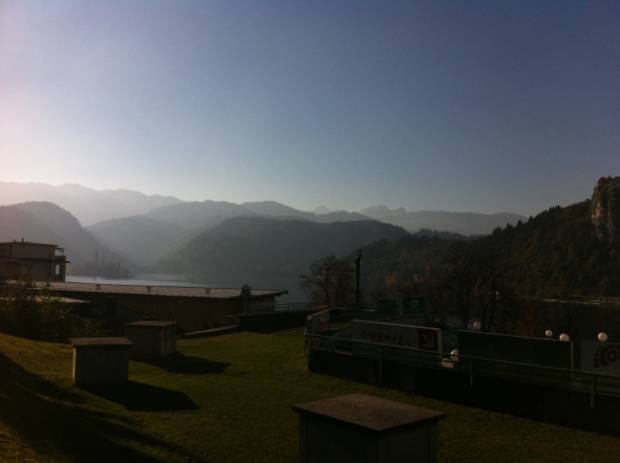 I'm just back from JavaOne, where once again we had a great turn out for JBoss related sessions (almost a dozen!) I'm sure the other speakers will post blogs, if they haven't already, to give everyone an idea of how the event and their sessions went. My own were well attended and judging by the various comments in the talks and afterwards seemed to appeal (slides should be made available on the JavaOne site soon). I know that the "meet the EE7 experts" session was also well attended, but this time I was in the audience and Pete Muir did a great job of explaining some of the things we'd like to see improved in the standards as well as the way in which they're managed. 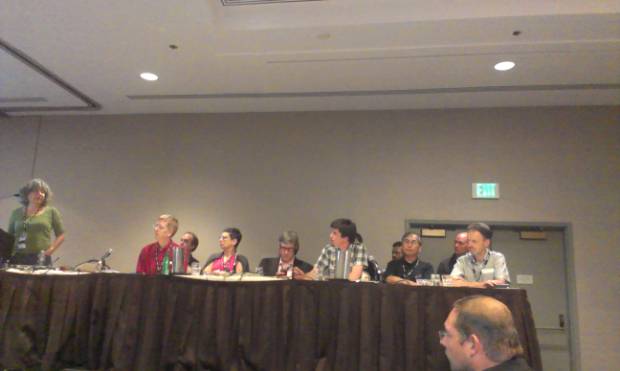 Of course one of the things that has quickly become a tradition with JBoss (and a success) is our booth and the booth sessions/presentations that we do. There were 21 sessions this year and every time I swung past the booth it was packed! Many of them were recorded so they'll be online eventually, but this picture I took gives you an idea of the level of interest. 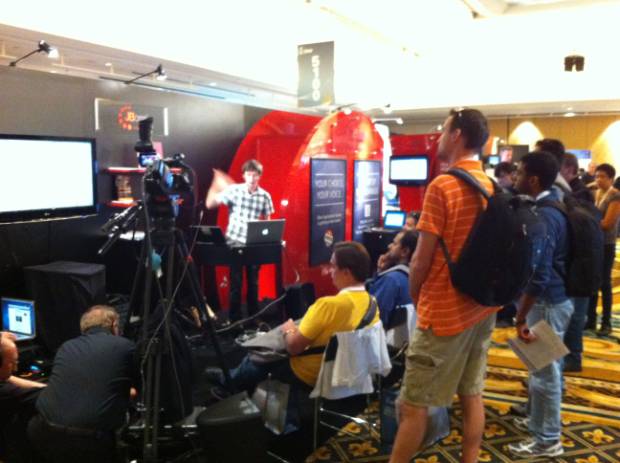 And of course another tradition is the JBoss Party. We held it this year at the MOMA and although it was slow to get going, it quickly gained the momentum that is typically associated with out parties! 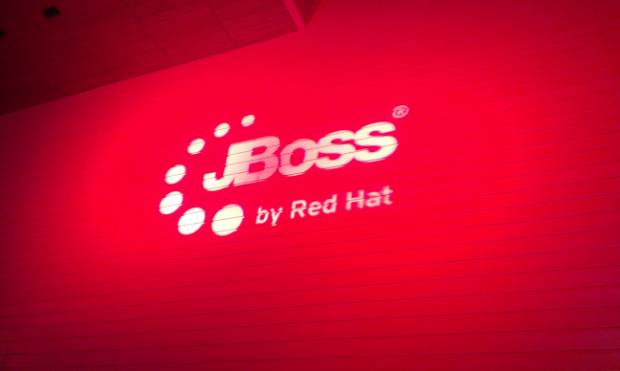 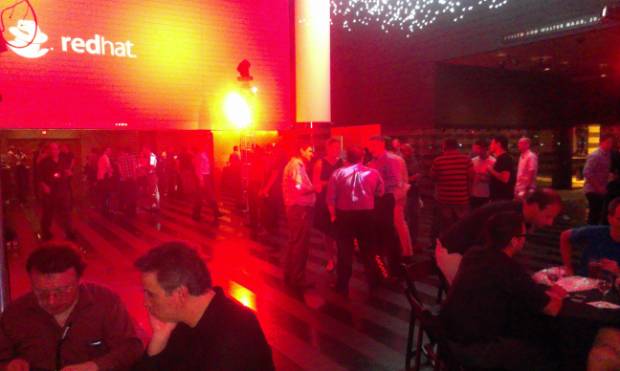 Overall the feeling throughout JavaOne was great and I think JBoss and Red Hat participation was key to this. So here's looking forward to next year!

I had thought that we had been pretty explicit about the reasons behind the recent announcement of the JBossAS rename, but some feedback I've received makes me think that another entry is necessary. As I said before, there are a number of factors involved in the rename decision, some technical and some not so. But one of the major issues we want to fix is the confusion inherent in the term 'JBoss'. Sometimes people use it to mean the community. Sometimes it's the middleware group in Red Hat. Sometimes it's the EAP product.  And sometimes it's the community application server project. This confusion can cause major problems, especially if you download JBossAS (AS7) assuming you're going to get a fully supported binary, only to be told weeks, months or years later that that isn't the case!

So we find ourselves at a point where, because the project and product often diverge over the lifetimes of versions, it creates a lot of confusion when they have the same name. Instead, when people see software called "JBoss," we want them to know that it's a commercial product with a well defined SLA and support lifecycle, in contrast to the community projects with best effort forum-based support provided by the community. And other projects with "JBoss" in the name will continue to be renamed, as we've already been doing for the past several years with messaging, transactions, security, etc. We also hope that more clearly distinguishing the projects from the products in this way will encourage wider community participation.

When you think of major influences on Java middleware over the years then JBoss the company and JBossAS the project should be in your list. Whether it's bringing J2EE to the masses, helping open up the Java Community Process, or simplifying application development, JBoss has played a significant role. However, as I've pointed out several times, the middleware landscape of today has changed and is continuing to change radically and we continue to change with it - in fact I assert that we are driving a lot of this change. Our plan, best summarised around JBossEverywhere, is obviously to continue to drive for further improvements in the EE standard and specifically in our implementations, e.g., DeltaSpike. The JBossWay initiative is the project under which many of these changes will happen. Of course we have far more today than just an EE application server, so JBossWay will extend to those as well.

Our work with mobile and embedded devices, such as running projects including AS7 on a RaspberryPi, helps to put the capabilities that all enterprise applications need into the hands of developers no matter where they are. Of course the various polyglot work such as with TorqueBox and Ceylon, is equally important because although we believe the JVM is the right base on which to build, we don't want to force people to use Java. For the kinds of cloud PaaS that we are focussing on with OpenShift, this flexibility is critical. It's also flattering to see others trying to copy us! And talking about cloud, CapeDwarf leverages JBoss EAP6 underneath GAE interfaces in OpenShift, so JBossEverwhere truly goes from the small scale to large scale!

As I mentioned before, the JBoss name now covers far more than an EE application server. We have SOA, BRMS, Portal as well as tooling, and with the acquisition of FuseSource and Polymita our breadth and depth of technologies increases. JBoss morphs every time an acquisition occurs; in fact every time we hire someone we evolve, being influenced by them and influencing them. So really when I talk about JBossEverywhere I'm talking about JBoss/Arjuna/Metamatrix/Fuse/Polymita/.../Everywhere. Mobile and cloud have driven another area of innovation: NoSQL and BigData. With Infinispan and JDG we announced part of the strategy there. But much more is to come in the near future. I can't go into details just yet, but suffice it to say that I've been working with teams across JBoss and wider Red Hat to formulate a plan that will take shape over the coming months.

JBossEverywhere is intended to put JBoss technologies into the hands of as many developers as possible. The recent JBossAS project rename announcement and associated strategy to enable developers to gain greater access and availability of our products, is therefore yet another "string in our bow". I am sure that by allowing all developers to use our products for free whilst at the same time ensuring innovation in our communities, is not only a game changer for professional open source, but it also helps all of our communities grow and benefit from each other. Of course there's a long road ahead of us with all of the plans I've already mentioned, as well as those that I haven't. JBoss will continue to evolve. JBossEverywhere will influence much of what we do in the coming months. And I'm hoping that with the changes we've announced recently that all of our communities will help make it a success.

I first came across JBoss in 2002 when started Arjuna Technologies and we were looking around for ways to leverage the transactions and messaging pieces we'd brought with us when we exited HP. We subsequently replaced the JBoss transaction and messaging pieces with our own and had a fairly successful business selling that combination. Fast forward a few years and JBossAS was dominating the open source J2EE landscape. With the evolution of enterprise Java, EE5 and then EE6, the Red Hat acquisition of JBoss, and a few other changes in our industry, JBossAS evolved and became the basis of everything we do. Whether it's portal, SOA or mobile, JBossAS is the fabric on which we build. And then of course there's the Fabric effort which is continuing to feed into it and other projects.

What this means is that JBossAS today is very different to what it was a decade ago. The uses cases it has to satisfy are orders of magnitude more complex and diverse than they were. Put simply, although Java EE is central to what it does and we do as a community, it is no longer the only driving force behind it. And over all of these years, through all of the changes I've mentioned, we've all known it as the JBoss Application Server, or JBossAS. With EE6 came our shorthand of AS7, but it was really still JBossAS. Well now we'd like to change that. We've had lots of discussions here and we believe that the time has come to change the name of our project to better reflect the changes we've seen in its reason for existence so far, but also for what's to come in the future. Importantly with something so influential to open source, we want our community to be involved in the rename in just the way they have in other aspects of its life. So this is your chance to suggest a name that will be associated with the number one application server.