Well hopefully you're all aware that the vote has completed and the winner is ... Jakarta EE! I'm pleased with the name and I'm also pleased we've got that out of the way so we can move forward as a community and help drive enterprise Java to the next level. I couldn't have said it better than my friend, co-PMC member and CEO of Tomitribe did earlier: 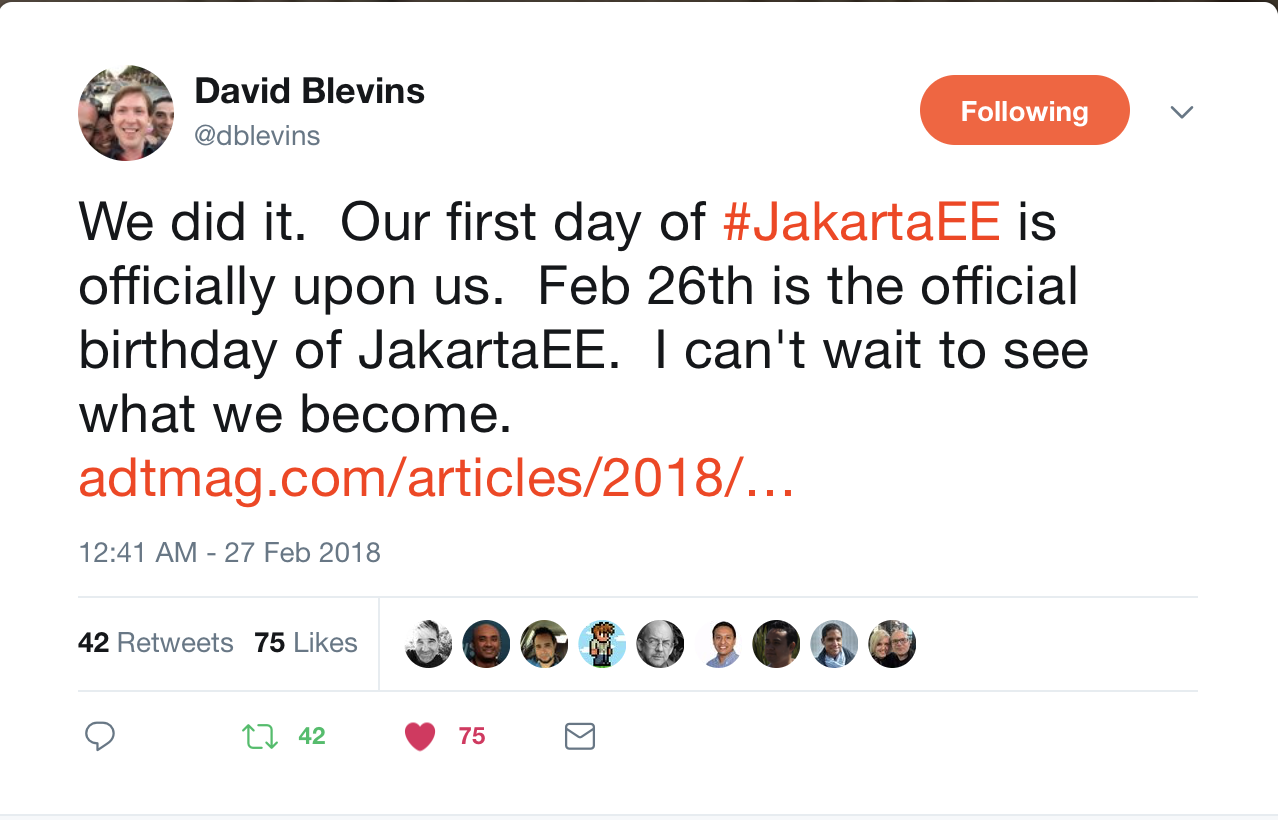 Mike from the Eclipse Foundation wrote a great post on the next thing we're doing around driving Java EE forward: the EE.next Working Group. There isn't really a lot more that I want to say which isn't covered in Mike's article and the point of my post is more to try to encourage everyone to get involved, whether you are representing a corporation, big or small, or just acting as an individual. I've said it before but I'll say it again: the future of Java EE will be determined by the community and you can help in many different ways. Start by joining the working group!

I've written about EE4J a few times before and many others have too, particularly on the name. Back in November, Mike from Eclipse announced that we were going to run a community effort to pick a new name for the Java EE brand once it moves to the Eclipse Foundation. We had a lot of great names submitted from the community by the time the input period ended. The next step was to run through various legal, patent and IP processes to determine whether each name was even open for use. Very similar to the processes we had to go through when we renamed JBoss AS7 to WildFly, in fact. That pruned the list dramatically to the point where we now have only a couple of names left as options. Yes of course we could re-open the suggestion box but that's not going to guarantee a different outcome and in the meantime the Java EE brand doesn't move forward. Therefore, that's why as a member of the EE4J PMC I agree with the original timeline of events and we should simply vote on the two renaming names: Jakarta EE and Enterprise Profile.

Now of course given that I was one of the creators of the MicroProfile effort (now Eclipse MicroProfile) you might be forgiven for thinking I'd prefer Enterprise Profile. It has a certain ring to it and in some ways compliments MicroProfile. However, I actually prefer Jakarta EE and here's why:

So all in all I think Jakarta EE is by far the best choice of the two. And in fact I can't think of a better name now that we've whittled down the list. However, this is a community effort so just remember to cast your vote.