Skip navigation
All Places > Drools > Articles
Currently Being Moderated
This project is read only now. 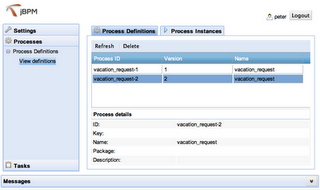 The client side uses GWT and additionally relies on GWT-Mosaic. There is an intermediary facade build on RESTeasy (JSR311) which uses Json encoding. The console server itself is decoupled from concrete jBPM implementations through an integration layer,

which needs to be implemented by managed runtimes. The following picture shows a high level overview:

The client side use GWT 1.5 and currently relies on the GWT-Ext extensions. Recent discussions show that it's quiet likely that we are going to move away from GWT-Ext due to a change in their license model, but for now it enables us to get things done quickly. The client application shares a domain model (DTO) with the REST facade and json encoded data for the backend integration.

The server is build on RESTeasy, a JSR 311 implementation. It allows for rapid publishing of REST resources and has out of the box support for "application/json" and "text/xml" marshalling. Support for specific content types can easily be extended, which can become important when extending the BI/BAM capabilities (think PDF or Image generation). REST was chosen over GTW RPC for several reasons:

The integration layer decouples the console server from the managed BPM runtime. Both the GWT application and the intermediary layer share a domain model which needs to be adopted by concrete BPM implementations. Differences between jBPM3 and jBPM4 will be tackled at this level.

If you take a look at the maven build structure, you'll find  the modules: RPC,Server and WAR.

The server and war modules create distinct web applications which can be deployed separately. This allows you to deploy the REST facade on  a running JBoss AS instance, while still developing in GWT hosted mode. The test suite  does rely on this mechanism as well. It's necessary, because the DAOFactory implementation usually require server resources like EJB's, Datasources, etc.

NOTE: The server module needs to be deployed on a running jboss instance, along with jbpm.
The easiest way is using the installer as described here: http://www.jboss.org/community/docs/DOC-12863

Build and test the console

The console is build within the WAR module. It relies on the maven-gwt plugin, which automatically downloads and install a GWT bundle specific to your OS. Detailed information goals, setup and examples can be found here .

2. Make sure the gwt-console-server.war is installed along with jBPM (or any other process engine)

3. Launch/debug the GWT app itself

The gwt console ships as optional installation component with the jBPM installer (beginning 3.3.0.GA). Since it has a dependency on the jBPM runtime it will follow the same release cycle, which every 8 weeks. Details on the jBPM roadmap can be found here .

Ask for help at irc.codehaus.org#jbpm

This content has been marked as final.  Show 10 comments
Close