Odd Thesis was an incubator for many projects, Cloud releated too. After more than a year there was a decsion to move to JBoss.org infrastructure. We placed our projects under StormGrind – umbrella for Cloud related projects in JBoss. With the move all projects were renamed and some project were divided into smaller parts. Additionally new projects we're added too. Confused? Take a look at the below diagram. 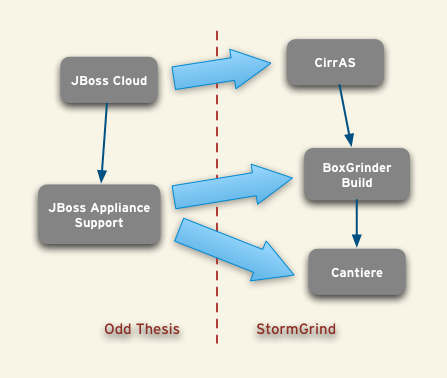 What happened to JBoss Cloud?

BoxGrinder is a set of a few smaller projects:

Go to StormGrind home page and read more. Be sure to read also the StormGrind | Documentation. Current list of our projects is always available on projects page.

You can always ask for help – see our community page.