This post provides a brief introduction to Switchyard, what it is, and how to use it to build a service-oriented application.

This post also provides a hands-on introduction to the new SwitchYard graphical editor. We’ll build an application from scratch, but our focus will be on the tools that SwitchYard provides you, and not on the business logic of our application.

(Please note, that this post was written with the "nightly" build of Switchyard 0.5 in June 2012. The eclipse based tooling introduced in this post will be released in version 0.5 of SwitchYard.)

The post is divided into 10 sections. Let’s get started in the first section with a question, actually a few questions.

Section 1: Starting with a few Questions

Just what is Switchyard? Is it another Enterprise Service Bus (ESB)? How can I use it? Better yet, why do I want to use it? And, did I mention that I’m in a hurry? Don’t waste my time - I’ll give you 15 minutes to get me the answers.

The top level page at http://www.jboss.org/SwitchYard defines SwitchYard as:

Hang on for a minute! That’s a pretty heavyweight sentence for a lightweight framework.  Let’s dissect that sentence into smaller bites to see if we can better understand SwitchYard:

Section 2: What About JBoss ESB?

No, JBossESB is not dead. JBossESB is alive and well. A new update (version 4.11) scheduled for this week. The community is growing and as vibrant as ever. There’s even a beautifully written new Beginner’s Guide  (http://www.packtpub.com/jboss-esb-beginners-guide/book). (Full disclosure, I’m one of the books authors.)

Well, if JBossESB is not going away, If I want to build a new SOA application starting today, should I use ESB or SwitchYard?

The answer to this question is, “it depends.”

At this point in time, SwitchYard is very much a work in progress. It’s design and implementation are evolving and will evolve significantly in the future months as it grows toward its 1.0 release. JBoss ESB is more mature, and is undergoing primarily incremental changes and improvements.

So, if you are building an SOA application that you want to go into production in the near future, you should look at JBoss ESB. Actually, if you need enterprise level support, you should really buy a subscription for the JBoss SOA Platform (http://www.redhat.com/products/jbossenterprisemiddleware/soa), which has at its core JBoss ESB.

For the longer term future, you should look at some of the ways in which SwitchYard will make some aspects of SOA application development easier.

It’s easy to visualize an ESB. You just think of a bus with services “plugged” into it. But what about SwitchYard. What does SwitchYard “look like?”

It’s a little more difficult to draw a picture of SwitchYard, as one of its main goals is to enable you to focus on what your application looks like!

The contents of a SwitchYard project however do have a different configuration than JBoss ESB project. We’ll take a look at these differences next.

Unlike traditional ESBs, the configuration requirements imposed by SwitchYard are minimal. Let’s use JBossESB as reference point. A service-based application deployed to JBossESB requires configuration files to define the JMS topics and queues on which it depends. It also requires a “jboss-esb.xml” file to define the resource providers (such as JMS) on which the services depend, the services themselves, the gateways through which messages are “on-boarded” to the ESB and the notifiers through which messages are sent off of the ESB, and the “pipeline” of actions that perform the tasks that comprise the services. Creating and maintaining a jboss-esb.xml file for a services-based application can be a difficult and time-consuming task.

At first glace, this may seem like a trivial change from jboss-esb.xml to switchyard.xml. What’s the big deal, only the file name changed, right?

Why was this standard selected as the lingua franca of SwitchYard configuration? What advantages does using this standard give us? There are multiple levels of advantages:

It’s also important (as we’re all lazy programmers who want to avoid error-prone manual tasks, after all) that SwitchYard provides tools to automatically populate the contents of switchyard.xml. We’ll see these tools in action in a bit.

When we talk about SwitchYard services, we're concerned with how we can create a service, and then how that service can be used (or "consumed") by other services.

How exactly do you create a SwitchYard service? Watch closely because SwitchYard makes this simple:

And that’s all folks. You’ve got a service. Yeah, SwitchYard tries to keep this simple.

Here’s an example (thanks to Keith Babo - as I’m borrowing this code from his demo):

Once you have a service, how do you access/consume it? Through Context Dependency Injection (CDI) in three more steps:

(1) Add an @Reference and @Inject annotation

(3) Invoke methods on the injected reference

What types of services does Switchard support?

At this point, let’s switch into to a hands on mode and perform some tasks with SwitchYard.

When I first started working with JBoss software, I asked a co-worker, how do I perform an installation? His response was a blank stare for a few seconds, after which he said, “You download the .zip and unzip it.”

It might sound trivial, or obvious, but the ease, and low entry cost (you can’t get cheaper than free!) with which you can get started using JBoss projects is a great feature. You can download whatever projects you want and try them out at no cost.

To get a copy of SwitchYard, the steps you have to do are:

Go to this page: http://www.jboss.org/SwitchYard/downloads - you’ll see a display similar to this:

For the purposes of this impatient discussion, we’ll use the SwitchYard AS7 Distribution.

Section 9: Running SwitchYard and the JBoss AS7 Server

The JBoss AS7 (http://www.jboss.org/as7) server is JBoss’ newest application server release. AS7 is compliant with the Java Enterprise Edition 6 specification, and is the preferred deployment platform for SwitchYard.

(Note that by the time you read this, SwitchYard 0.5 will probably be available as a download.)

To install the SwitchYard AS7 Distribution, simply select a directory where you want to run the server, and unzip the http://downloads.jboss.org/switchyard/releases/v0.4.Final/switchyard-as7-0.4.0.Final.zip file into that directory.

Let’s jump right in and start up the server:

After a very short time (Did I mention how fast JBoss AS7 is? It starts up and runs very quickly!), you’ll see logging messages that look like this that indicate the server is up and running:

Now that we have SwitchYard running, let’s create a new project. We’ll do this the easy way and take advantage of some new JBoss eclipse-based tooling, the SwitchYard Graphical Editor. Note that as of this writing, the editor has not been released. It will be released in SwitchYard 0.5

First, we need to install a few things:

Once all the tools are in place, we can create a new SwitchYard project. Before we do that, however, let’s think about the application that we want to build, and the steps that we have to perform.

The application exposes a simple web service implemented in a Java bean. The service accepts a string, and prefixes the world “hello” to it. That’s right, if we pass the word “world” to the service, it returns “hello world.” We’ll access the service by sending it a SOAP message. For our “client,” we’ll use soapUI (http://www.soapui.org/).

The function performed by the application is not the important thing. What’s important is how you can build it with the SwitchYard tooling, especially the new SwitchYard graphical editor.

The major steps that we’ll perform are: 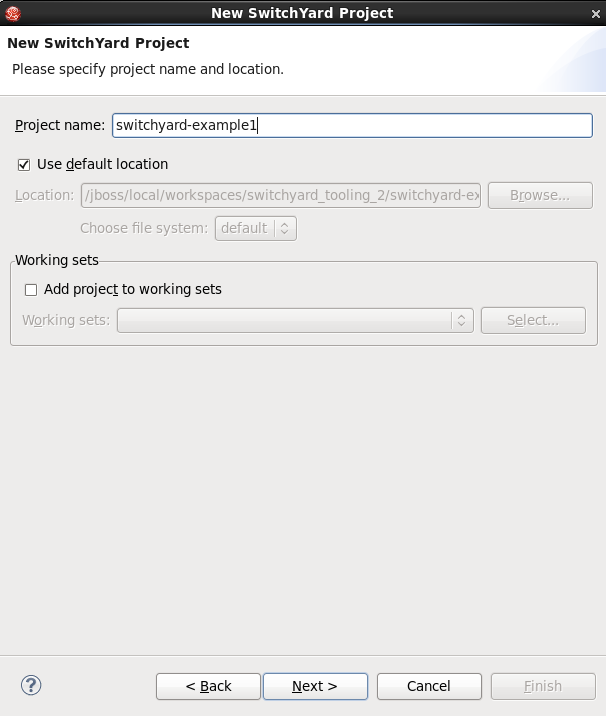 We can accept most of the default settings for this project, the  exception being that we have to set the bean and SOAP facets: 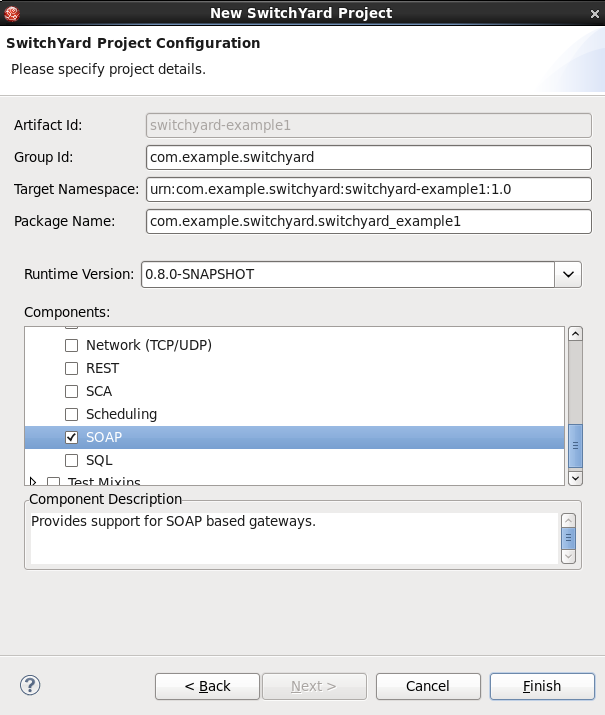 When the new project wizard completes, we access the new SwitchYard graphical editor by double-clicking on the SwitchYard icon in the project explorer:

And the editor is opened.

The editor consists of:

Create a bean component, and in the course of doing so, create its contract (interface)

To create a new bean component, select the Bean implementation icon from the palette and drag it onto the canvas. The Bean definition dialog opens: 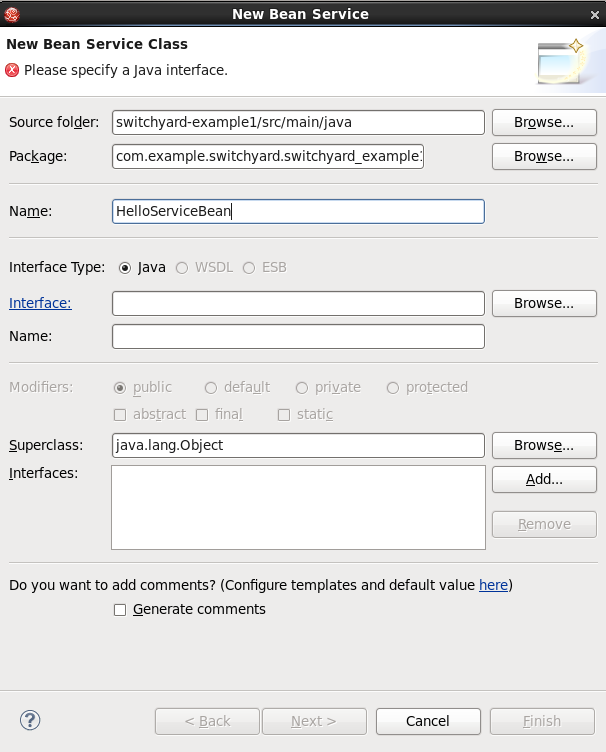 To create the corresponding contract (interface) click on the blue "Interface:" text and this dialog opens: 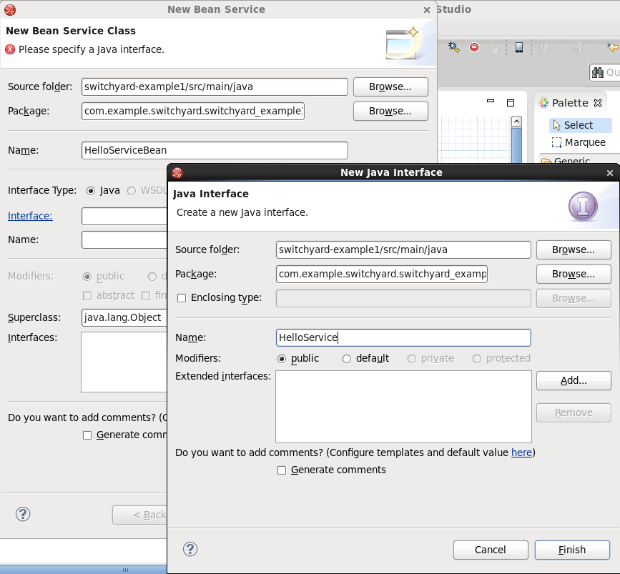 After we select "Finish" to save the definition, we see the bean component on the canvas: 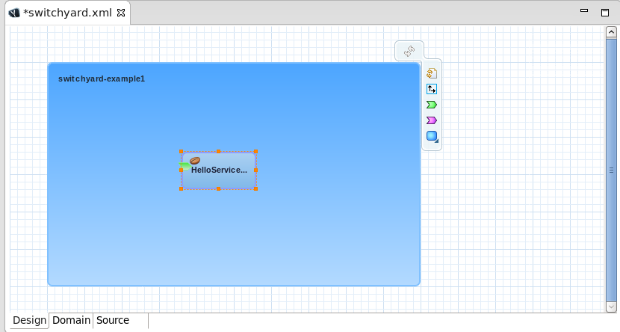 At this point, we need to fill in the code for the bean and its interface: 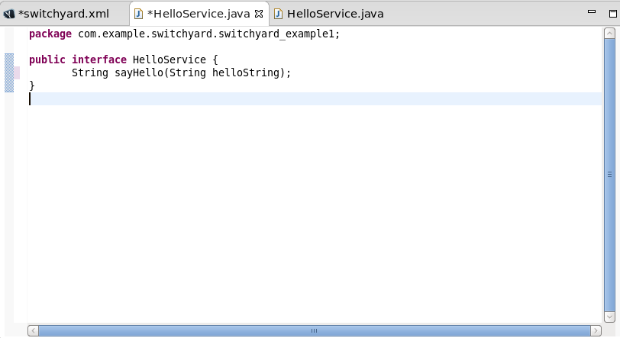 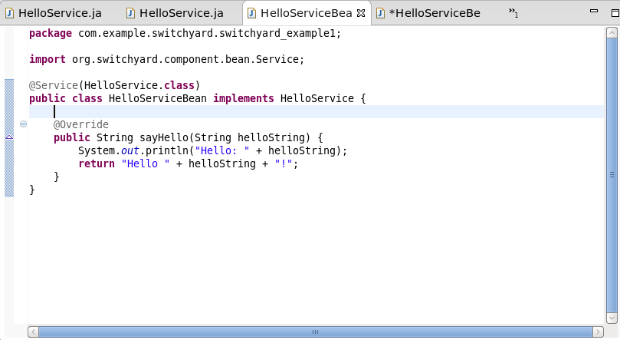 Promote the service so that it is visible as a web service, and in the course of doing so generate the service's WSDL, and create the necessary transformations

Next, we promote the service to make it visible (right-click on the service's green icon): 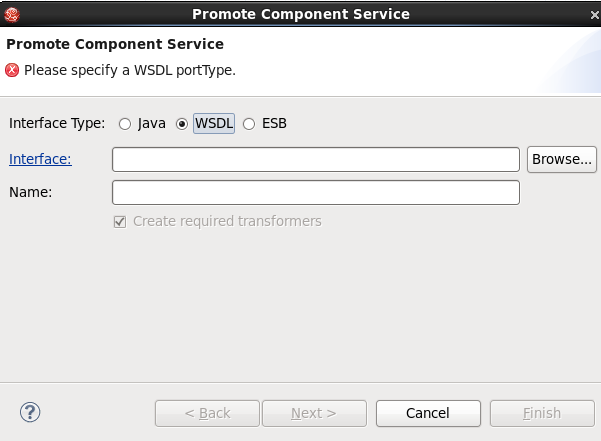 We want to make the service visible as a web service, so we'll select WSDL as the interface type - and the UI will generate a WSDL for us, based on the contract (interface) that we defined earlier: 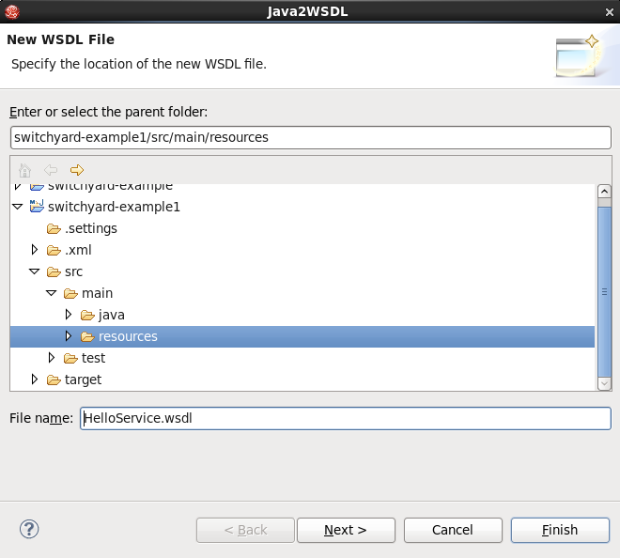 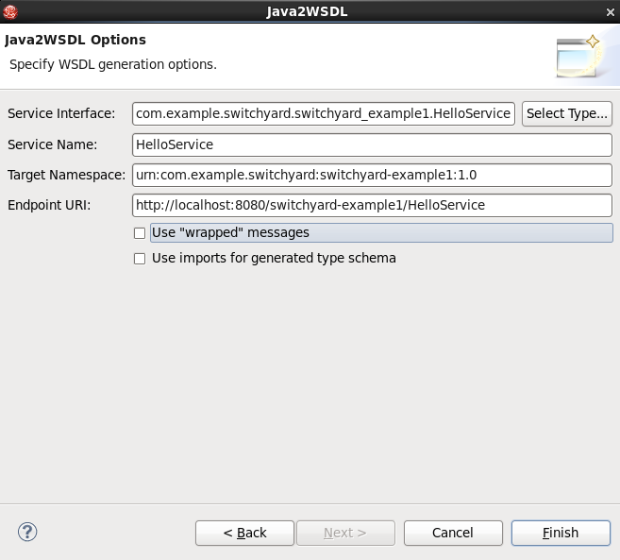 Note that we selected to not use wrapped messages, so that our transformations can access only what is inside the elements they receive.

Our service has to transform data between objects and strings, so we next have to generate transformations: 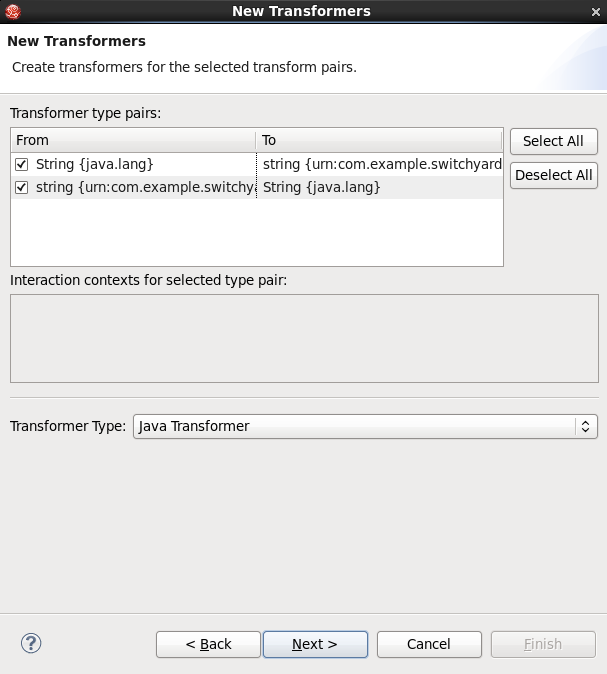 Our (Java) transformers are quite simple: 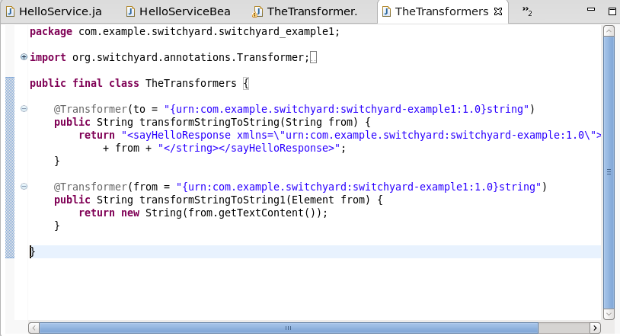 Now, we create a SOAP binding: 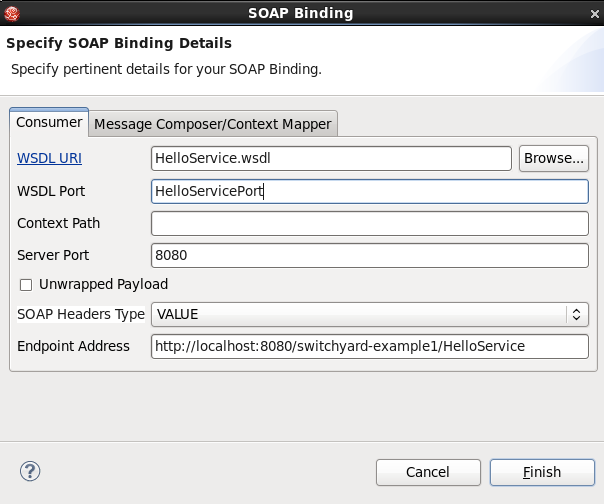 Note that you can always view/edit the binding after it's created by accessing its properties: 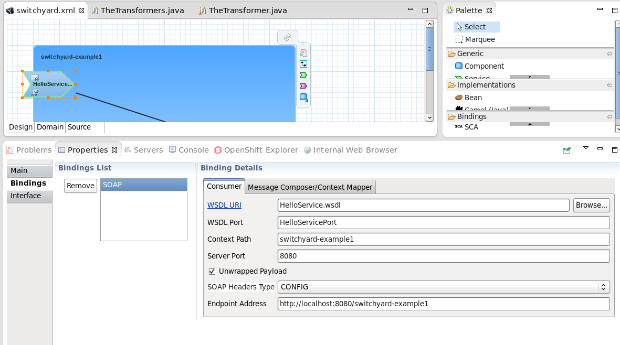 And fire up soapUI, we can easily create a request by accessing the deployed service’s WSDL:

And there it is, the output from our very small SwitchYard service.

Well, that’s a brief (impatient) introduction to Switchyard, where to get it, how to install it, and how to build a service from the bottom up. What’s next? In a followup post, we’ll take an in-depth look at the services Switchyard provides by examining some of the SwitchYard quickstarts in detail.

There are a number of great demos of SwitchYard available at the SwitchYard video channel - check it out!   https://community.jboss.org/wiki/SwitchYardVideoSeries

I’d like to thank Keith Babo, Tom Cunningham, Rob Cernich, and Brian Fitzpatrick for their (never impatient) review comments and suggestions on writing this post!

This content has been marked as final.  Show 15 comments
By date: By tag: