JBoss AS 7 is still being developed on but lately file based deployment is now in place and I thought it would be a good thing to tell you how you can use JBoss AS 7 from our tools even before there is an optimized and fully supported server adapter for it.

It's not optimal, but at least it lets you get started.

For this blog I used JBoss AS 7 Beta 2 and JBoss Developer Studio 4; you can use a newer version of AS 7 (beta 3 is coming out soon) or if you have JBoss Tools 3.2.0 installed all this works fine too from there.

For now the best way to start/stop AS 7 when working from Eclipse is to simply start and stop it from a command line.

Press Ctrl+C in your terminal/command prompt

You can start AS 7 via Eclipse External Tools support but Stopping won't work since it will only stop the shell script not the actual running AS 7 instance. Thus for now - use the command line.

Create a Deploy Only Server

The "Deploy Only" server is available in JBoss Tools & Developer Studio and provides a server adapter that has no special knowledge about the server it is deploying to beyond a directory location. Thus this is perfect for using with servers that does not yet have direct support from within Eclipse.

To create one you simply hit Ctrl+N or use File > New > Other from the menu and find the Server wizard.

Within the Server wizard you need to find and select the "Deploy Only" server: 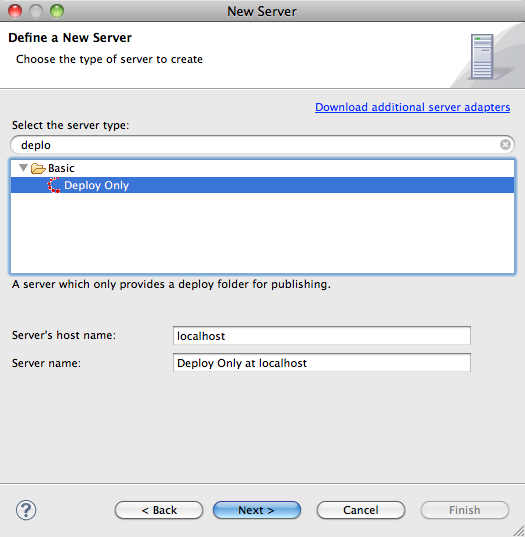 Press "Next", and then give your server a name and specify the directory location for deployments.

For AS 7 standalone deployments goes to $JBOSS_HOME/standalone/deployments.

Press "Finish" and you should now have your "AS 7" server available in the servers view:

Now you have a "Server" which you can deploy standard Web tools projects to; you simply drag'n'drop deployable resources to the server or use the "Add and Remove" available in the context menu.

There is one "gotcha" with this setup and that is that with AS 7 for exploded deployments it now requires a .dodeploy marker to explicitly trigger a (re)deployment of an exploded directory.

The simplest way to avoid having to set this up is to enable "Compressed Archives" from within the tools since AS 7 will automatically deploy such archives once they are complete.

To enable this, double click the Server and it's server editor should show up. 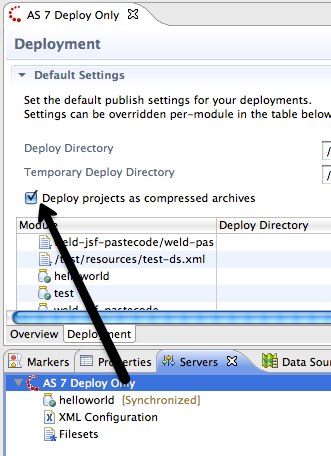 In this editor, switch to the Deployment tab and make sure there is a checkmark for "Deploy projects as compressed archives".

With this done you can now easily add any war/jar/ear project to the server and deploy it.

To deploy or redeploy this simply right click the server and choose "Publish" (you can also use the keyboard shortcut shown in the menu for easier access).

If you really want to use exploded deployments then there is a trick you can do to simulate the .dodeploy marker with JBoss Tools.

Simply create a text file in your project called "foo.war.dodeploy" where foo.war should the name of your deployment. In my case that is "helloworld.war.dodeploy". 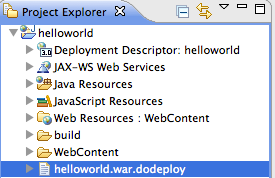 Then right click this file and choose "Mark as Deployable"

If you don't know what a "dodeploy marker" is look in the README.txt in $JBOSS_HOME/standalone/deployments for an explanation.

Please note that Deploy Only server currently does not support automatic publishing thus you have explicit invoke Publish when you are ready.

This will be fixed in upcoming release of JBoss Tools 3.2.

Project Archives is mostly relevant for those not using Web Tools style projects, but is also usable for deploying to AS 7 - the feature is already documented and even with a screencast in a previous blog

We are working on it and the first steps of an AS 7 adapter is already in JBoss Tools trunk which will be JBoss Tools 3.3 and target Eclipse 3.7.

If you are interested in that work ask on the forums where we will keep you updated with the progress, i.e. when there will be an updatesite to install and use from

While at EclipseCon a few weeks ago, I heard about a new framework at Eclipse for quickly developing Eclipse editors for XML files, especially XML configuration files. As Konstantin Komissarchik, one of the lead developers on Sapphire, pointed out in the summary for his EclipseCon talk - "[Sapphire] is a UI building framework that allows developers to specify UI in terms of higher level constructs like property editors instead of widgets and layouts. This paradigm results in several orders of magnitude improvement in developer productivity while simultaneously delivering better quality UI that is easier to maintain."

Though I missed his talk, I had a chance to sit down with Konstantin afterwards and he showed off what his framework can do. To say the least, I was excited. One of the things we do a lot of in JBoss tools is editing XML configuration files. We have them everywhere. And we don't really have a consistent look and feel to any of them. The other thing I was excited to see was the potential integration with Graphiti, a framework for graphical editors. Perhaps they've hit upon the "Holy Grail" of UI development?

Here's an example from one of the samples that comes with the Sapphire framework: 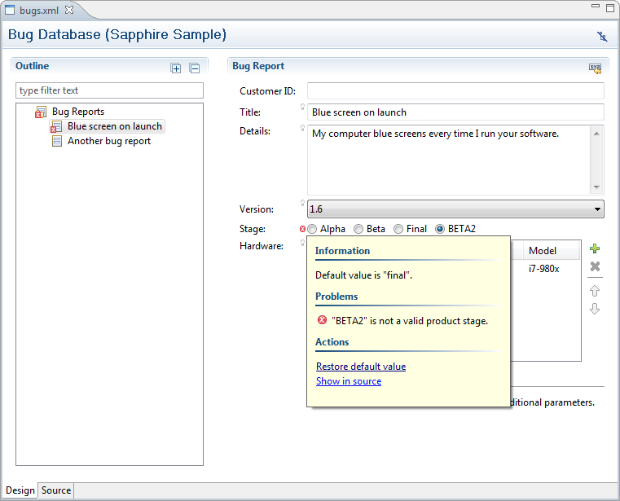 I wanted to find out. So when I got back from my trip, I started playing with Sapphire locally. You have to keep in mind that this is very early in the process for Sapphire. The version I'm working with is 0.3 and they're providing bug fixes nearly every day, which means things may break or change between updates. Honestly that's fine - Konstantin said they're using the framework at Oracle and have commercial editors out in the wild based on this technology, so it has to be pretty good, right?

We have a runtime project at JBoss that's rolling along at a pretty good clip now. It's the next generation of our ESB called SwitchYard. You can check out the SwitchYard Community Page for more details. But they've been working on the format of an XML configuration file that we'll need to develop an editor for. It seemed like the perfect opportunity to put Sapphire to the test

Over the course of the last 5 or 6 business days, I've probably put in 20-30 hours on this editor. I've run into a few issues here and there, most because I didn't grok the framework fully at the start. But I've ended up with a good first cut that is able to edit the initial sample of the configuration file. And that's amazing to have something that even sort of works in that short a timeframe.

Ultimately developing an editor in Sapphire boils down to two main things:

Think of the Java interface files as a quick and easy Java bean representation of your XML. So various element structures and properties are reduced to getters and setters in the interfaces. All you do from there is take the Switchyard annotations and indicate how to tie those properties back to the XML you're editing. The Sapphire framework then takes those annotations to define a model (using EMF of course see the correction below) on the fly representing your XML. This is the "Model" part of your typical Model-Viewer-Controller approach.

[Correction: Konstantin pointed out that "Sapphire does not use EMF for any part of modeling or data binding. The developer specifies semantics in interfaces and annotations. The annotation processor generates implementation classes. The XML binding code directly reads and writes on the live DOM API exposed by the XML editor."]

Then the SDEF file describes how to present that generated model to the user in UI form. Want to generate a view? Cool. Wizard or dialog? Cool. Editor? Cool. And you can define reusable components of the UI so you don't have to redefine everything if you decide to go, for example, from a dialog to an editor later on. It's nice because there's instant integration between the Outline view and the Editor for example, so you don't have to worry about the niggly little bits that can sometimes consume days at a time to get right.

What's awesome is that the Sapphire UI Definition Editor is itself written in Sapphire. Talk about eating your own dog food.

Here's a screen shot of what I have working so far: There are some gotchas:

That's about it at this point. Now that I have the structure working and can define/modify/delete things via the editor, I want to go in and add some polish. Things like boolean options - true/false, combo boxes, validation, etc.  After that's done, I'll start playing some with the Graphiti integration - but I'm not quite ready to tackle that yet.

Interested in playing with Sapphire yourself? Here are a few links to get you started:

A big thanks to Konstantin for helping me out on the Sapphire mailing list and forum. He's been very patient dealing with me over the last week!