So, thanks to Igor Fedorenko's last efforts, m2eclipse-wtp 0.12.0 is finally out, (update site available at http://m2eclipse.sonatype.org/sites/m2e-extras), bringing the WTP integration with Maven to a whole new level. The complete release notes are available here. However, I wanted to highlight some of the most notable features in this new version, so let’s take a quick tour :

Maven has this interesting concept of web resource filtering : basically you can add resources existing in non standard directories, into your final web application. Moreover, you can filter these resources to apply, for instance, specific application configuration depending on a maven profile : you can activate some debug options in your web.xml, define development specific parameters in your spring configuration files, use a different css color scheme when you work locally and so forth.
Supported maven web resource filtering features are :

Here is a sample of maven-war-plugin configuration filtering any xml files under src/main/webapp, using an external filter file :

Note that after adding the webResource configuration to your pom.xml, you need to update the Maven project configuration.

m2eclipse-wtp 0.12.0 not only supports these features from maven, but goes one step further and brings you on-the-fly filtering : as soon as you save a file included in the <webResources> configuration from the maven-war-plugin, filtering is triggered automatically. Couple that with WTP’s hot redeployment capabilities, and you can see your changes by just reloading the affected pages in your browser.

OK, to be fair, that depends on the changed files, actually. If you change the content of your web.xml, or some spring config files, chances are you’ll have to restart your application or the server for the changes to be taken in consideration.
The filtered resources are  copied to the project build directory, under m2e-wtp/web-resources. You can view the content of this folder directly from the Project Explorer view in eclipse, under the Web Resources Node. You can open and compare side by side a raw file and its filtered version, as shown in the following screenshot. 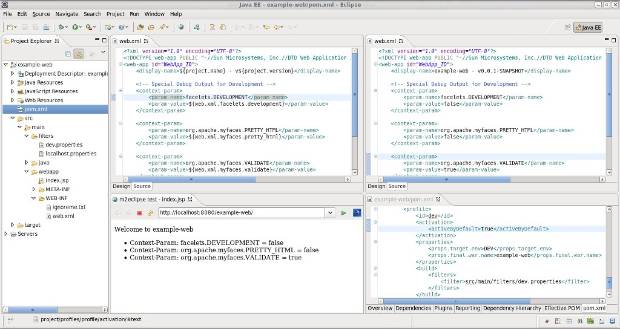 In the previous example, the dev profile, activated by default (see lower right panel) determines which filter file must be used during filtering. In this case, we want to active some debugging options. The index.jsp page, shown in the browser in the lower left panel, displays the computed values of the different context-params from web.xml.

Now after changing the active profile (due to a bug in m2e-core 0.12.0, the pom.xml needs to be saved twice for the change to be detected, but this has been fixed in m2e-core 0.13.0) and after restarting tomcat (it doesn't restart the application upon web.xml changes), you'll notice the web.xml values are updated, values are taken from another properties file. 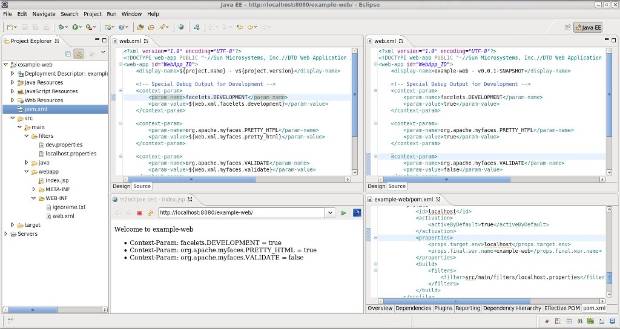 However, you can customize the context root used in WTP by setting a custom property in your pom.xml, for instance, if you need to use "/" as your context root, just add <m2eclipse.wtp.contextRoot> in your properties and update your maven project configuration :

When restarting tomcat, the context root change will be detected and tomcat will ask to update its configuration. Now the same application is accessible at http://localhost:8080/

The java nature was wrongly added to EAR projects. This is no longer the case. Moreover, existing Java nature will be automatically removed from existing EAR projects upon update project configuration.

Generation of application.xml outside the source folders

Since m2eclipse added support for EAR projects in 0.9.8, many users complained the deployment descriptor was generated under the source folder, under version control. Since application.xml (and jboss-app.xml) can be generated by maven automatically, there is no need to pollute the source folder right? Starting from m2eclipse-wtp 0.12.0, the deployment descriptors are now generated under <build directory>/m2e-wtp/ear-resources. Similarly to the web projects, a new Application Resources node is now displayed in the Project Explorer view, showing you which EAR resources will be deployed/exported. 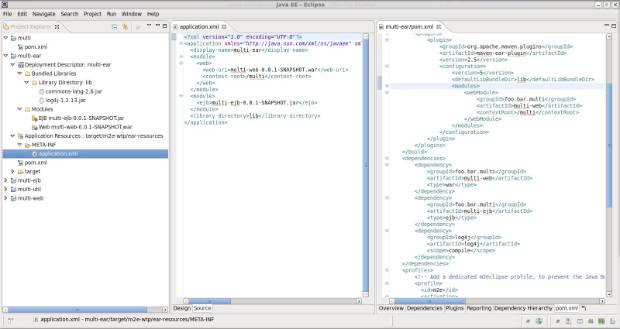 If, for some reason, one would still want to generate the deployment descriptors under the source folder (src/main/application by default), then you could right click on the project, open the project Properties and go to the Maven > WTP integration page. There, after enabling specific project configuration, you can choose to NOT use the build folder to generate application.xml. After validating your choice, all EAR projects in the workspace will update their configuration, if you choose so.

Then you can check in the Project Explorer view, under the Deployment Descriptor node, all dependencies' names under the Bundle Libraries and Modules are updated : 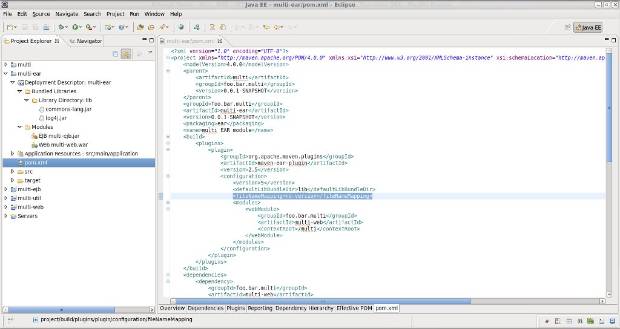 Many users, over the years, experienced random crashes during project import or configuration update, or saw test resources being deployed with their applications. All these issues could be linked to one root cause : some WTP projects were missing a crucial element : the org.eclipse.wst.common.modulecore.ModuleCoreNature nature in their .project. The root cause of this "corruption" is still unclear, this is probably caused by some race condition, but unfortunately, this has proved impossible to reproduce with test projects.

m2eclipse-wtp 0.12.0 actually workarounds this issue : if the ModuleCoreNature is missing from WTP projects, it's automagically added to fix the projects, under the hood. Hopefully, this should fix most of the crashes users occasionally experience.

m2eclipse-wtp 0.12.0 is the last version supporting Eclipse 3.5 (Galileo) based platforms. Next 0.13.0 version will be aligned with the new, revamped m2e-core 0.13.0 (= future 1.0) and will be released at about the same time frame as Eclipse 3.7 Indigo (late june). The next big thing is the added support for war overlays, the single most requested feature in m2eclipse-wtp. If you like to live on the bleeding edge, you can already try the latest development builds, available under https://repository.sonatype.org//content/sites/forge-sites/m2eclipse-wtp/0.13.0/N/ (use the latest directory as your update site).

One last thing : all this sweetness would not have been possible if I wasn't working full time on m2eclipse-wtp. Fortunately, Max R. Andersen got me a job in his JBoss Tools and Developer Studio team, and allows me to spend a considerable amount of time playing with my favorite toy of the moment :-) Thanks a bunch Max!!! Also big thanks to Eugene Kuleshov, Igor Fedorenko and Jason Van Zyl who gave me the chance to get involved in m2e(clipse).