Skip navigation
All Places > JBoss AS > Performance Tuning > Discussions
This project is read only now. Read more.
3 Replies Latest reply on Aug 29, 2013 3:08 AM by mattdarwin

We upgraded our software from jboss 4.0.5GA to 5.0.1GA and noticed that after one hour or so (or 90 minutes in some cases) performance drops dramatically.

At the same moment, the garbage collector logs show minor garbage collection times jumping from 0.01s to ~1.5s, with the amount of the heap being cleared each time reducing from ~400MB before to ~300MB after.  (see GC viewer graph 1) 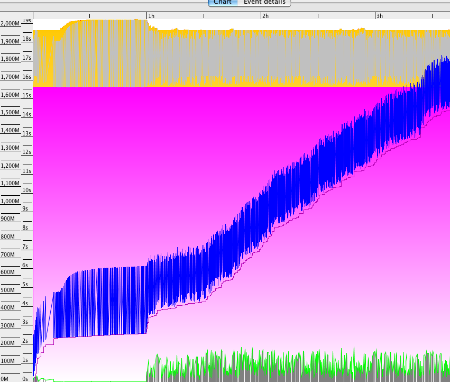 We think these are both symptoms of the the same underlying root cause.

We found that we could easily reproduce the problem in our environment.  The box which was running on 4.0.5 ran fine, but on jboss 5.0.1GA we saw the same strange GC behaviour.  Performance can't easily be tested in our environment since we don't have the same amount of load as production.

We don't think it's a memory leak, since after each major GC, the used heap size returns to the same size: 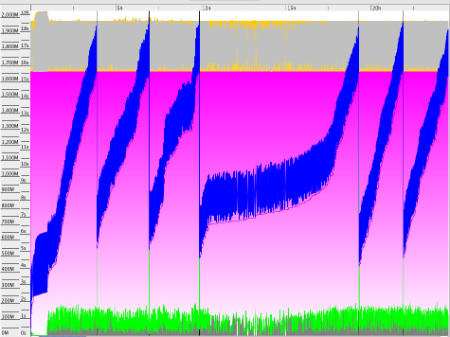 Analysing heap dumps taken pre- and post-apocalypse, we discovered the number of the following objects was different:

during the first hour, there are about 8 of them, and after the apocalypse hits, we see between 100 and 800.

Other than that, the heap dumps look quite similar, and the top objects are either java or jboss objects (ie no application classes)

Setting -Djboss.vfs.forceVfsJar=true on our test environment fixed the problem (ie the strange GC behaviour disappeared) but when applied in production, both the strange GC pattern and the performance problem remained - although the GC times didn't increase so much (to 0.3 seconds rather than 1.5 seconds).

In our test environment, we then deployed the same software in jboss 5.1.0 and found the same behaviour as with 5.0.1.

So the conclusions at this point are that there is something happening in jboss 5.x around the 60 / 90 minute mark which has an impact on both garbage collection and performance.

I found two questions here which could be related:

They both refer to the jboss web services stack, and suggest upgrading it to jbossws-native-3.3.1

However my application doesn't use any web services...

I have the same question (0)
This content has been marked as final.  Show 3 replies
Go to original post