Many my workmates and viewers ask me about the detail about the "Parallelism" I mentioned in my previous blog post http://community.jboss.org/people/andy.song/blog/2010/08/06/new-way-scale-upout-the-jbpm-without-jbpm-clustering-jbpm-sharding.  Because what they think and practice it is impossible from their  perspectives, and without the details they even cannot accept the "JBPM  sharding" solutions. Then I realized I hided too much things, without  that level details something about the new ideas could not be practicable.

Here I will not lend some expert explaination, I will use my little poor words skill ().  If we make the whole system behavior (SLA, Stability) is log（N) same  when dealing  single request or multiple requests. Simplifies with the  examples: 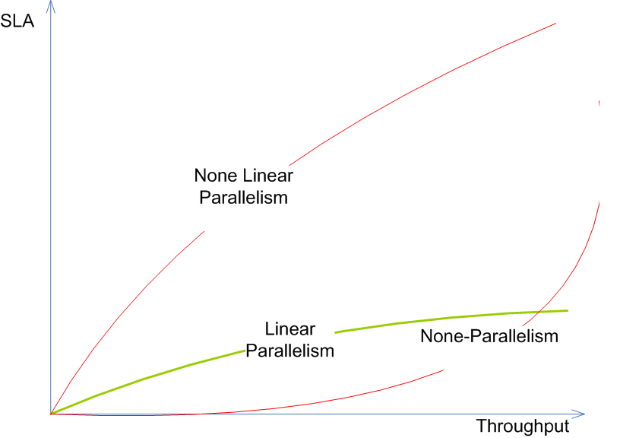 1. Start New Processes and signal to the first nodes

2. Do the business logics with each node defined.

3. Singal the process continue execution to next nodes

So here we will fundmentally two different choices will come up, others will be little variant with the following two.

1. Everything is conceptual inside-bpm operations 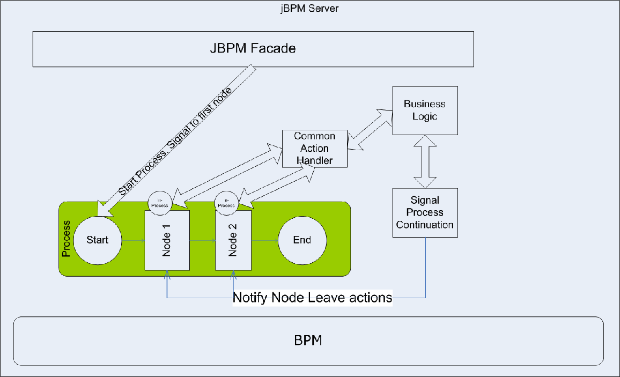 2. Everything is conceptual outside-bpm operations 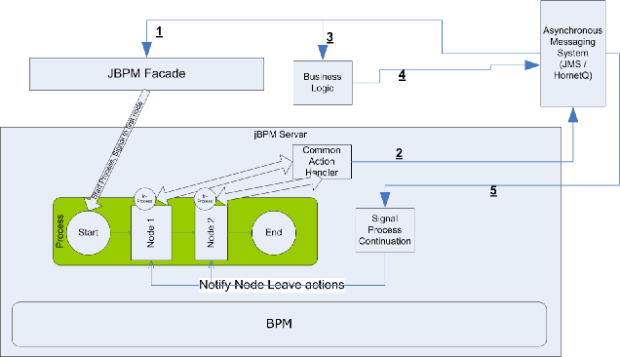 So which was the parrallelism version? Of course "second" was the one we want.

1. Any invocation/interaction with JBPM should be break-up to two pieces: 1. Trigger , 2. Execution. Trigger leverage with asynchronous messaging protocol, jboss does great jobs on that part so HornetQ/Jboss Message is your first choice.

2. The each invocation/interaction input could be searilized to some text format stream, so business logic will only meet some identifiers stream and true business state information will load from storage (DB, Cache, etc).

3. The same datacenter for jBPM and execution logics will be important, otherwise the network partition will become some bottelnecks.Please ref: http://highscalability.com/blog/2010/8/12/think-of-latency-as-a-pseudo-permanent-network-partition.html

4. Transaction ISOLATION prefer the eventually consistency, rather than read_committed. As snapshot information will be largely used in whole process executions.So tranditional transaction isolation will become the stone-block for parallelism.

3.  So the individual request processing a little longer than none-parallelism mode.

2.  Select correct seralization mode is also important, TEXT/String will be applicable solutions. But memory consumption for sting in java is very bad, you should try your best banlance the memory consumption and parallelism maximum.

3.  Only could be put inside the same location Data Center. If cross network locations, the pattern is not applicable. We may need other tools for help like Inter-Data Grid service or Clouding services.

4.  You should build your own diagnostic tools for tracing, debuging and deployments. But that means you can learn more, good thing isn't it from DEV perspectives. But managers may hate that.

So right now you understand a little more detail about my previous two blog messages regarding parallelism? Some simple principles comes online:

2. seralization is not always your victim.

8. you should always has your own libraries, because your always don't have enough time for practices.

SEDA, is a design for  highly-concurrent servers based on a hybrid of event-driven and   thread-driven concurrency. The idea is to break the server logic into a  series of stages connected with  queues; each stage has a (small and  dynamically-sized) thread pool to process  incoming events, and passes  events to other stages. http://matt-welsh.blogspot.com/2010/07/retrospective-on-seda.html 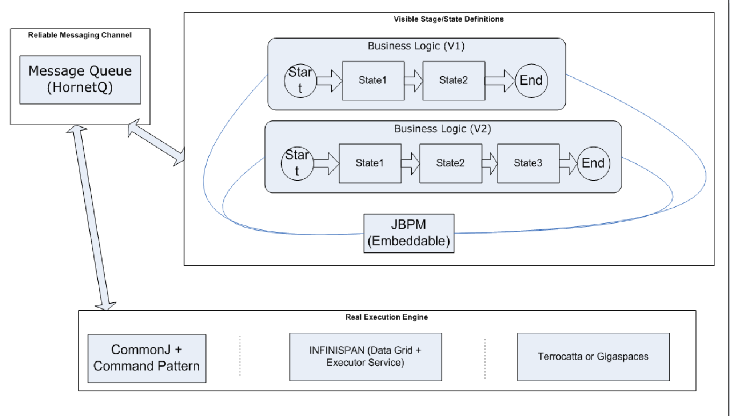 Pros:
Cons:
Suitable areas:
[Knowledges]
Within single JVM we started multiple JBPM shardings, the distributor will be easily become the java method calling
Running multiple JVMS holds for different JBPM shardings, the distributor will be designed as remote method calling:
Current in prod we use the intra-Jvm design
JBPM ProcessInstance structure cotain one not used field "key",  so when we create process instance in jbpm we can put the sharding ID of  jbpm into process instance. So later we need populate that key  information when do node event handling and signal process continuation.
pros:
Very easy and useful, not spof
cons:
Hard to diagnostic
Current in prod we use that design, but we will log the process creation information into logging system
Create one centralized JBPM process DNS lookup  table, similar with other DB sharding design. But you also meet spof and  maintainence issues. [Note]
Please forgive me poor english, that skill need to be long-going improvements as I'm Chinese guy.
All testing setting:
1. JVM: jdk 1.6 u21
2. Marchine: Single machine (VM), with dual core cpu and 4G memory
[Reference]
[My Bio]
I am living and working in Shanghai of China, my  current company was StarCite. I worked as technical leader in that  company and my most forcus was scalability and performance design.
You can contact me via email: hqxsn@hotmail.com
MSN: hqxsn@sina.com
By date: By tag: