May 2013 Previous month Next month

I had the pleasure of speaking at the Scotland JBUG earlier this week in Edinburgh. It was a great event and well attended. 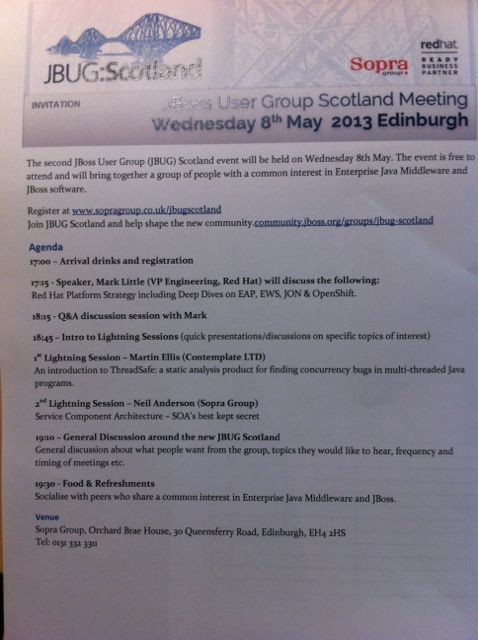 I gave a presentation on our roadmaps for various products as well as some of the technical direction. There were a lot of good questions and the presentation should be uploaded soon.

It's official, Java EE7 has been approved overwhelmingly. This is great news, particularly for the updates to various components such as CDI and JMS. I'm proud of our continued association with the JCP and glad to see that we could get this out relatively on time. Now it's on to EE8. Furthermore, given the WildFly announcement last week, we'll be looking to implement EE7 as soon as possible.

And now for the annoying and frustrating aspect: it seems like we have no vote recorded! Whether through a fault in the system (it's happened before), forgetfulness (it's happened before) or insanity (no comment!) we appear to have no vote associated with EE7 and some related JSRs. If this is our fault then it's my fault, since I had the token to vote. I'm chasing this with Oracle at the moment, because I'm sure we did vote! But according to the records that didn't happen. If it turns out we didn't vote then a big Mea Culpa to the team and our communities!

For the record: we would have/should have/did vote Yes/Approved to all of them.