It's time for a new fresh milestone update of JBoss Tools:

JBoss Tools is a set of plugins for Eclipse that complements, enhances and goes beyond the support that exist for JBoss and related technologies in the default Eclipse distribution. For this release we continue to move Maven, CDI, Java EE support forward and also add in a few new "surprise" features.

As always, get and install Eclipse 3.7 (Indigo) JEE bundle - with the JEE bundle you majority of the dependencies letting you save bandwidth:

In this release we've therefore included an UI which allows you to easily set/change the profiles on single and multiple projects.

This is especially something that becomes useful when you use Arquillian where it is a common practice to use Maven profiles to toggle the various dependency sets for each server you wish to test against.

It works by you selecting the relevant project(s), press Ctrl+Alt+P or use Maven > Select Maven Profiles... and a dialog box appears allowing you to enable/disable the available profiles for the project(s): 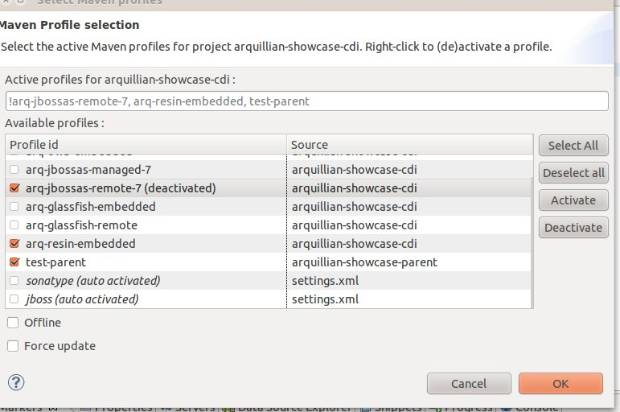 Ever been tired of having to manually configure ports, projects and source path lookups for debugging on Remote Applications in Eclipse ?

We are, especially after we learned that JVM's running on Hotspot provides API to discover such applications and allow for easy configuration of your debugger. In this release we've thus added a command available from Debug As... > Remote Java Application... in the context menu on any set of resources.

Once you select this command, we use the Hotspot API to discover the remote running applications, allows you to select which you application want to connect to and then we do the tedious work of configuring the ports, names and source code lookups (including maven dependencies if applicable) for your Remote debugging.

No need for manual tweaking anymore.

Thanks to Aslak Knutsen for bringing us the idea and initial code to make this happen!

The CDI tooling adds a bunch of quickfixes to have JBoss Tools fix common issues. To aid in searching and navigating your CDI application, Find References (Ctrl+Shift+G) will now show the full list of injection points and EL usage of your beans and Seam Solder and Config annotations and XML now have easy hyperlink navigation to it's declarations.

For a long time we have been asked about providing support for SAR style projects for use on older versions of JBoss AS. This style of project packaging is now supported both in pure WTP style projects and via Maven.

GWT Tools are back

Since last time, Google released their GWT eclipse plugin in a version that supports Eclipse 3.7 allowing us to reenable the GWT Tools.

And by all means,

This content has been marked as final.  Show 8 comments
By date: By tag: