This release contains mostly bug fixes, but a few improvements managed to slip in. The complete release notes are available here.

As usual, m2e-wtp can be installed from :

So let's see what are the highlights of this new release :

For war project, previous m2e-wtp versions used to use <packagingIncludes> and <packagingExcludes> attributes from the maven-war-plugin config to enable (or not) the deployment of project dependencies to WTP servers. In 0.15.0, the same level of support has been added to EAR projects using maven-ear-plugin 2.7+. However, the problem with this approach is, other resources (web pages, classes ...) are not properly excluded (using the <*SourceInclude> and <*SourceExclude> attributes).

In order to address this problem, Rob Stryker, committer on WTP and lead of JBoss AS tooling in JBoss Tools, provided an implementation for JBoss AS servers that might be generalized to other WTP server adapters (if they decide to do so). Basically, some new metadata is added to the project's .settings/org.eclipse.wst.common.component like :

Now all m2e-wtp 0.15.0 does is map the maven patterns to their equivalent component metadata. This gives :

In the example above, a warning is displayed as both <warSourceIncludes> and <packagingIncludes> are defined. Since both patterns could overlap, it might lead to some weird behavior where WTP would actually deploy more files than a maven CLI build. In order to minimize (we can not totally solve) that potential discrepancy we only keep the packaging patterns in the component files and recommend using <packagingIncludes> only.

Currently, this feature only works in combination with the JBoss AS Tools from JBoss Tools 3.3.0.Beta1 (nightly builds available from http://download.jboss.org/jbosstools/updates/nightly/trunk/), but we'll try to make other WTP Server adapter vendors support it in the future (as part of WTP core API).

As of today, if a project depends on another workspace project of type ejb-client or test-jar,  that specific dependency will not be packaged properly by WTP, as Maven would do in command line. Moreover, you'll experience some class leakage on the compilation and test classpaths in Eclipse (ex: non client classes being visible). The only known workarounds to this issue are to disable workspace resolution, or close the dependent project and rely on the dependencies from the local maven repository.

Ideally, in order to make the deployment part work, we would need to introduce new WTP components, but the current WTP API doesn't support it, yet. So, until this is fixed, warning markers are added whenever a project depends on such "unsupported" types. That should hopefully give users an idea of the problem and how to circumvent it. 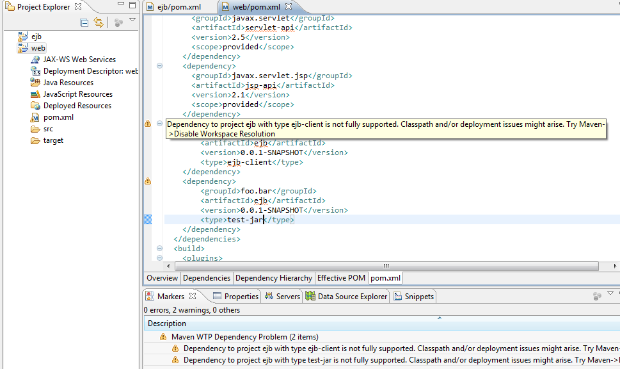 Previous m2e-wtp versions had, in some use cases, some outstanding issues with regard to dependency management of war projects. In particular,

If you had a java utility project, that you wanted to upgrade to an EJB project for example, a constraint violation would be raised upon project configuration update (EJB and Utility facets can't be both installed).

This has been fixed by removing all conflicting facets when you change the packaging of a Java EE project, making that conversion completely transparent.

m2e 1.1 introduces a new Eclipse to Maven project conversion API. It means that, in m2e-wtp.next, we will be able to automatically convert existing WTP project configuration to maven's. Dependencies will still need to be set/translated manually but that's a pretty good start IMHO.

I would like to thank the m2e-wtp community at large for their support and contributions, that's what make this project move forward and make it one of the most popular projects on the eclipse marketplace.

Contributions can take the form of :