One more for the road!

Red Hat JBoss Developer Studio is a fully bundled Eclipse distribution which not only includes the majority of JBoss Tools but also all its needed dependencies and 3rd party plugins allowing for an easy one-click and no-fuss installation.

If you are into doing your own bleeding edge Eclipse plugin assembly, JBoss Tools is for you; if you are more into having something that "Just Works" then JBoss Developer Studio is the way to go.

If you already have JBoss Tools 4.1.1 or Developer Studio 7.1 installed using 'Help > Update' will give you this release automatically.

If you want a new installation, then JBoss Developer Studio is available as a one-download-installer with everything bundled and configured out of the box.

When installing from Eclipse Marketplace we recommend using a fresh Eclipse 4.3.2 JEE Bundle since then you'll have most of the dependencies pre-installed.

Last one before Luna

JBoss Tools 4.1.2 and JBDS 7.1.1 are primarily focused on building on top of the latest Eclipse Kepler SR2 release, fixing 30 issues along. We keep on trying to make the life of Angular JS users easier, as you can see below.

This is the last planned release of the JBoss Tools 4.1.x and JBDS 7.1.x streams, based on Eclipse 4.3.x. Cool kids already play with the next milestones for Luna.

We backported one of the features we contributed to Eclipse Luna (Milestone 6), that is the ability to ignore non-standard HTML attributes. This is typically needed when developing Angular JS applications as the HTML validator considers Angular JS ng-* attributes as invalid html (which is actually correct since the proper syntax to be 100% compatible with the html5 spec is to use data-ng-*).

You can now quick-fix these warning (Ctrl+1) and choose to ignore specific or all similar attributes : 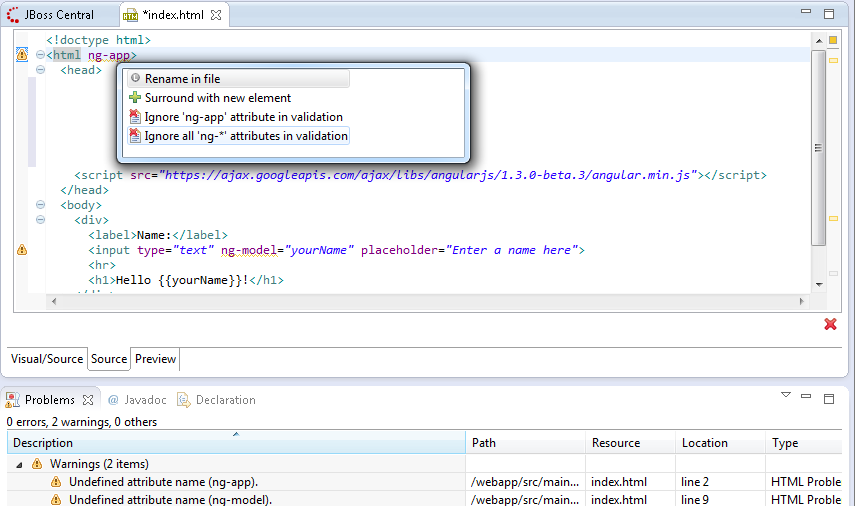 And if you're really into Angular JS, we recommend you try the AngularJS Eclipse plugin. We're currently evaluating it ourselves for inclusion in the next major version of JBoss Tools and Developer Studio.

Please don't hesitate to use our forum to ask questions, or, if you have ideas to better improve JBoss Tools / Developer Studio, or found a bug, then open an issue in our issue tracker.

We're currently hard at work preparing the next iteration of JBoss Tools (4.2)  and Developer Studio (8.0), targeted at Eclipse Luna. Brace yourself for the upcoming Beta releases in the next 2 to 3 weeks, with more awesome/cool/hip stuff ;-)