Modal window requires users to interact with it before returning to the parent window. In this example, when user clicks on 'Work on Task' button, the task details are presented in a modal window. 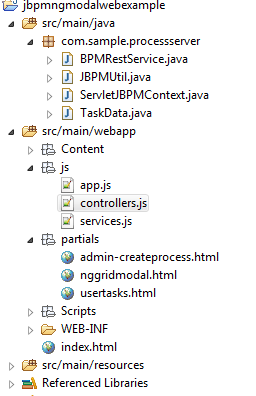 $modal service has only one method open.

In open method provide templateUrl, the path to the template that represents modal's, i.e., task data, content. Provide the controller for the modal instance to initialize the scope used by modal. It also needs a resolve method to resolve and pass the members to controller as locals.

In the NGModalInstanceCtrl method invoke the RESTFul service call to complete the task using the retrieved parameters.