I see two use cases for creating a new space (it's possible to have more):

Problems with the current interface

We have seen some evidences that users don't understand the concept of Group Navigation so they don't interact with this feature. On top of the lacking of understanding, the usability of the area is bad and has problems like the following ones (not all of them):

Some ideas for the redesign

In order to improve the area and make things simpler, I propose that, in the new Admin UI:

Considering the layout proposed on the discussion "Administration UI redesign", I put the spaces below the sites. In the first access, the sidebar contains:

It's important to notice that the Admin Space is not displayed since it's not possible to edit it's configuration and navigation.

To create a space, the user just needs to click the button "+" then "Space". To make the label more understandable, a short explanation is shown when mouse is over the link. The following figure represents the sidebar: 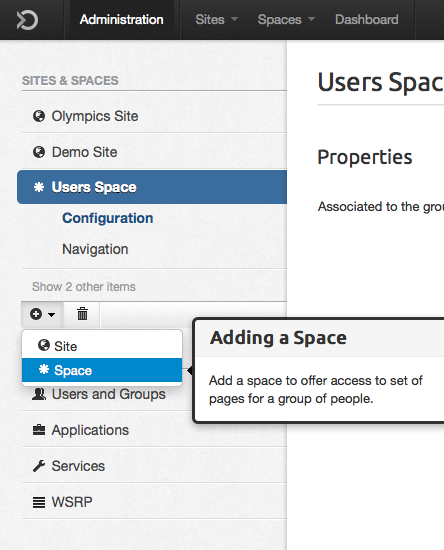 After clicking Add Space, the page "Configuration" is shown. The user needs to select one of the 15 preset groups, OR to create a new group. The label "priority" was replaced by "menu order", since it defines the order of appearance in the dropdown "Spaces" at the navbar. I made a quick prototype for the functionality that might be improved later: 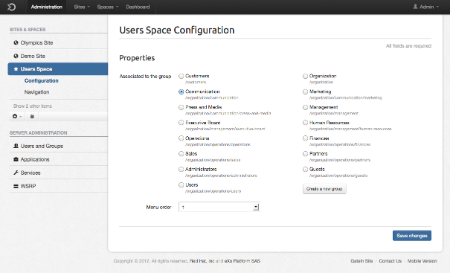 The option  "create a new group" is opened in a modal box and does not offer the option to add users to the group. The goal here is to only offer the functionality need to achieve this task. To manage users, the admin needs to go to "users and groups" > "group management". 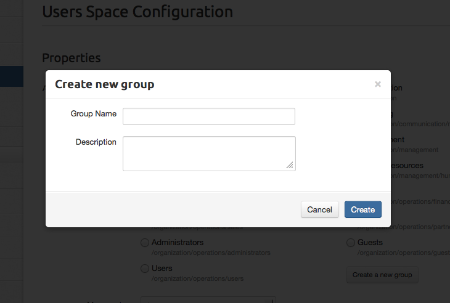 The process of setting a Navigation will  be improved with the redesign of the "Site navigation" page that will be done later.

As a result, the space created can be seen at the Navbar, near the sites and the dashboard.

The html of this version can be seen at: http://statichtml-theute.rhcloud.com/cardosogabriel/gatein-client/new-space.html