Skip navigation
All Places > Narayana > Narayana Development > Discussions
This project is read only now. Read more.
1 2 3 Previous Next 44 Replies Latest reply on Sep 13, 2013 7:29 AM by marklittle

This discussion covers the "Transactional MSC" feature scheduled for a future release of WildFly. Although the feature is discussed in general, the focus of this document is to establish the requirements from Narayana and to discuss implementation details.

There should be a way to manipulate the container atomically in order to guarantee integrity of the container in both standalone and domain managed modes. The types of operations that must be transactional are:

Each operation has a runtime effect on the in-memory configuration database in the MSC, plus a durable update to a configuration file (i.e “standalone*.xml”)

Failure to update configuration files (disk space, file system permissions) or modify configuration values must cause the operation to undo updates to all members of the domain.

Failure to deploy subsystems in a server farm is occasionally expected due to port conflicts and other environment issues. These failures should be able to be reported to the user. It is expected that the user will then provide a policy (potentially including manual intervention) to determine whether to complete the update based on the number of expected failures. For example, it may be acceptable to continue the deployment of an application where 30% of application servers have failed to deploy it.

The ability to undo specific branches of the update should not be required assuming the MSC can tolerate all classes of subsystem failure mentioned above.

A note on isolation

Elements of the operations are permitted to be visible to other updates before their encompassing transaction is completed. For example, reserving a port will require creating a serversocket binding.

The solution must run over JBoss Remoting. It is not possible to add further transport dependencies such as those required from JTS, RTS or WS-AT.

The auditing of MSC's transactions is out of scope for this discussion.

[Q] How much of an impact on performance can the solution impose? I appreciate this is probably hard/impossible to quantify.

[Q] What number of servers, present in the domain, should the solution scale to, whilst still maintaining an acceptable level of performance? I appreciate this is probably hard/impossible to quantify.

[Q] Do statistics need to be available (somehow) for MSC's transactions or can they simply not be gathered?

[Q] I think a separate logger should be used for transactions initiated by MSC. Otherwise, when the user increases the log verbosity, they will start to see logs for transactions they do not recognize. This may not be a problem, as this currently happens if you have more then one application deployed; it's not clear which transaction log lines belong to which application.

The solution (provided by WildFly)

A prototype of the proposed solution is available here: https://github.com/paulrobinson/txmsc-prototype

The prototype shows how Arjuna Core can be extended to provide the functionality required for Transactional MSC. In particular it provides a Root Transaction that can enlist Subordinate Transactions that are located on a remote VM. The example also shows how crash recovery and orphan detection can be achieved. The readme.asciidoc file in the root of the project explains how to run the tests and the examples. 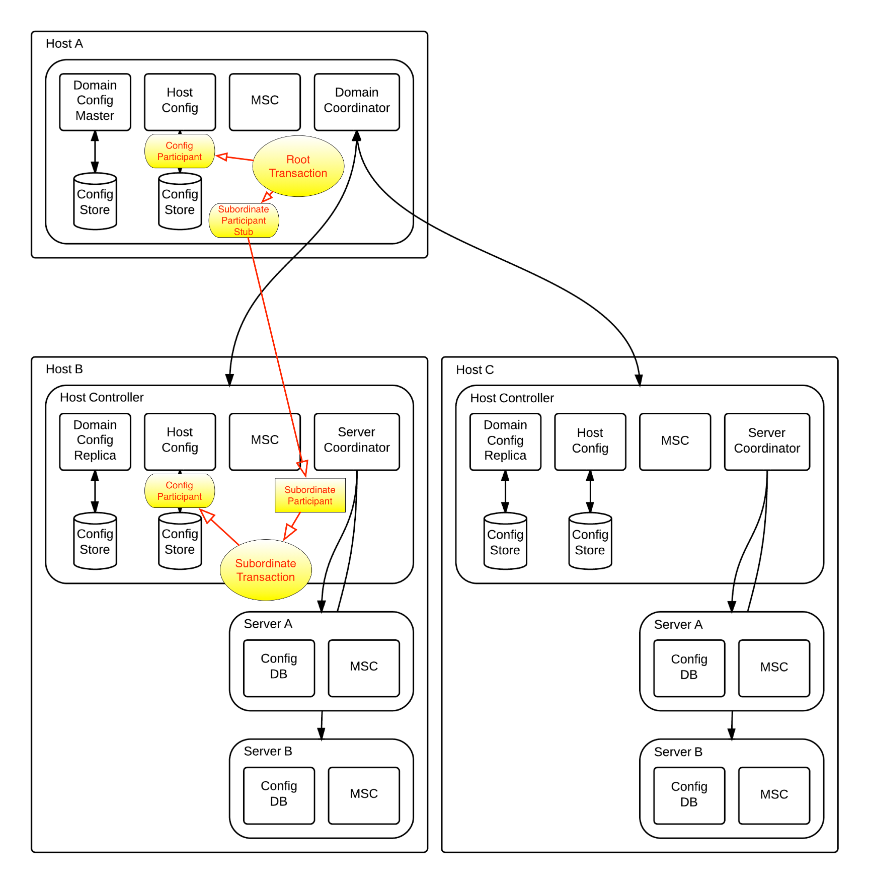 The diagram above shows how the pieces of the prototype fit in with the architecture proposed by the MSC team. The red and yellow shapes represent the pieces in the prototype. Notice that only one level of subordination is demonstrated, but it should be straight-forward to extend to the server level and to support multiple hosts.

The prototype only mocks-up the remote calls. The MSC team shall be responsible for implementing the remoting requirement (paying particular attention to correct handling of any new transport protocol exceptions introduced). It should be possible to apply similar techniques developed for the distributed JTA over JBoss Remoting developed for the EJB container in the WildFly application server. The following fundamental differences should be considered:

The object-store is not shown on the diagram. However, all participants and transactions are recoverable and state is persisted to the object-store, local to the VM in which they are ran.

As with the previously mentioned WildFly EJB container implementation, the resource manager (in this case the MSC container) is responsible for re-establishing remote connections to domain members required during recovery and correctly converting any transport protocol exceptions to ArjunaCore expected exceptions. It is known that some work (such as reserving socket binding) would be associated with an abstract record and in the case that the transaction rolls back these resources can be released. As mentioned previously these operations have no isolation guarantees.

The following diagram shows the sequence of messages that would occur with this solution. In particular it is simplified to just two levels (IIRC there is a third level, but I don't recall the details). The first 'level' contains the root MSC coordinator (Actors: Client, MSC, AtomicAction, ServiceProxy, ConfigProxy) and the second 'level' contains all the servers in the domain requiring the update (Actors: Service, Config). The diagram also omits any interposition techniques. This could be done to reduce the number of messages sent between the MSC coordinator and each server. 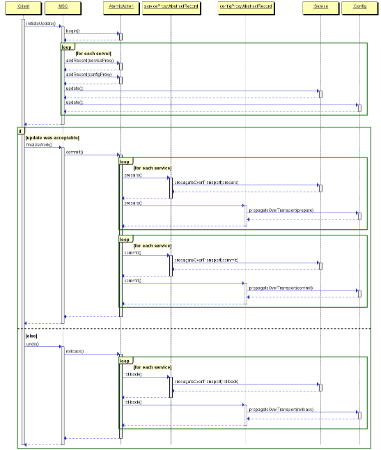 Our current understanding is that all the changes in Narayana are focused around isolating MSC's usage of ArjunaCore from the applications' and users' usage. Therefore it should be possible to prototype transactional MSC with the latest Narayana 5.x release.

WildFly provides two instances of Narayana, each in its own classloader:

The first instance is provided for applications deployed to Wildfly and appears to be identical to the current offering available in WildFly today (from the user and applications' point of view).

The second instance of Narayana is provided in a different classloader and has the following attributes:

Update Narayana to support isolation of applications. Each application can have its own configuration and will see an isolated view of statistics. The current view is that this is possible to achieve but will be a lot of work. We plan to revisit this solution once we are further down the path with the Transactional MSC implementation. 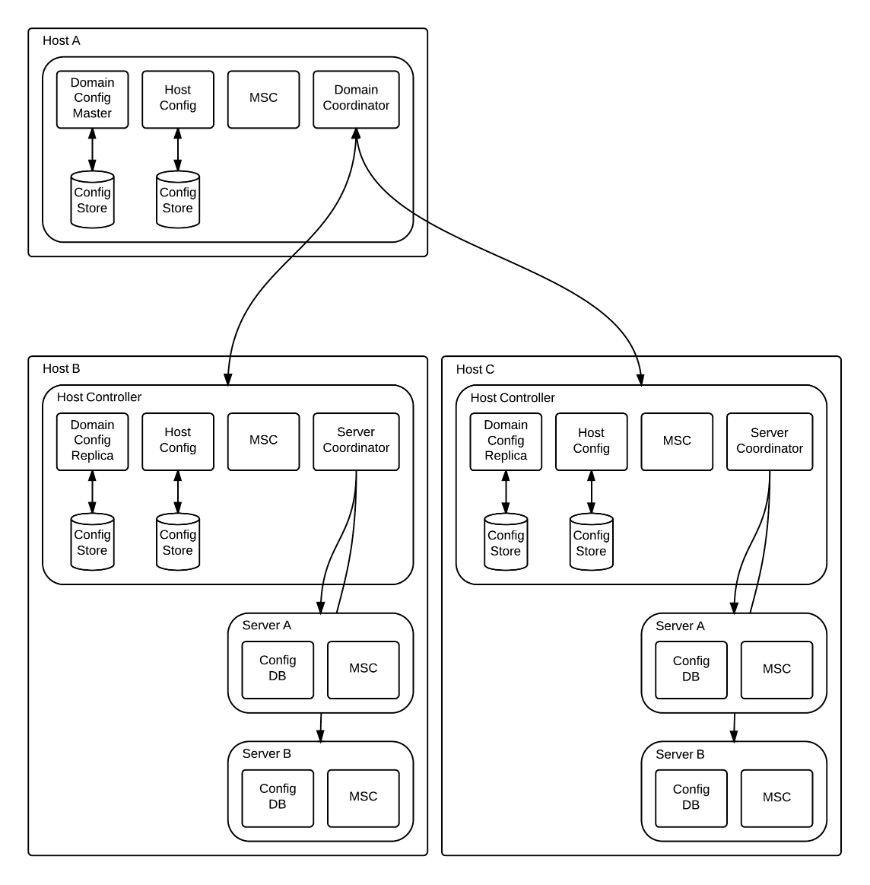