May 2017 Previous month Next month

I was pleased to see that Red Hat has acquired Codenvy to expand their cloud-native app dev portfolio.  Back in 2014 Codenvy started Eclipse Che by exporting and open sourcing their cloud kernel.  As it says on the site, Eclipse Che, Development Witchcraft, is the IDE and developer workspace server that allows contributing to a project without having to install software.  I am looking forward to working more with the project and seeing the contributions from Red Hat and the community with the container-based worskspace approach.

Now on to the happenings in our open source community!

The Past Weeks Highlights

Thanks for being a part of the JBoss Community and stay tuned for the next Weekly Editorial!

Another week has come to a close. It’s been a great week, full of blogs, releases and travel recaps within the JBoss Community! Here’s a quick recap of what has happened this week.

You all heard about Red Hat Summit 2017, probably multiple times. While I was there, I was able to get some time with some of our developers and do some quick interviews! These interviews will be highlighted here on the Weekly Editorial. The first one I’d like to highlight is my interview with Sebastien Blanc, aka Sebi. Sebi has contributed to AeroGear and is currently working on Keycloak, a security solution. In this interview we talk about what Keycloak is, how I would use it, and why it’s important.

A number of releases have happened over the past week!

The Arquillian team is really churning out the releases, with five releases this past week!

Hibernate Validator 6.0.0.Beta1 with Bean Validation 2.0.0.Beta1 support was released this past week! It requires Java 8. Go grab it and play around with some of the new features and validations in this release!

The APIMAN 1.3.0.Final release came out early this week and includes a number of bug fixes, improved documentation, a headless registry and the Vert.x Gateway has been polished and is officially released!

Fast on the heals of the JCP Ballot finishing, we can officially announce that CDI 2.0 is finished! You can also start playing with it using Weld 3.0.0, which is detailed in the release announcement.

The Immutant team has released Immuntant 2.1.7 which includes some updates to Undertow and Ring. It also fixes some issues with applications not being able to properly respond to HEAD request.

Because Red Hat Summit is over doesn’t mean travels are over! Our developers and community have been around ta many other conferences over the past week or two. Check out the recaps of these conferences in the various blogs:

Speaking of Blogs, a number of blogs have been released this week talking about OpenShift, APIMAN, Hibernate, Infinispan and testing!

Another week, another chance to discover all the amazing technology which is designed by the JBoss engineers. The Red Hat summit is over but there are still plenty of news to share with you as you will discover hereafter.

During the Red Hat summit in Boston, the OpenShift.io platform has been announced and presented. This Saas platform which is a Web Development Cloud platform offers the possibility to you developers to plan/create/manage your Java Projects using the Eclipse Che - Nex Gen IDE part of that platform, build and package the project created as docker images deployed within OpenShift Online without no pain using Dev Tools as Fabric8 Maven Plugin. This platform is unique as it offers many different user experiences (CRUD, Health Check, HTTP Api, Externalization of the configurations, ...) and runtimes (WildFly Swarm, Eclipse Vert.x, Spring Boot, ...) to accelerate your development lifecycle. You can also create Jenkins pipeline to test, build or promote your project between environments as well as human approval steps. Pipeline definitions are written using a Groovy DSL providing huge flexibility in how you assemble the pieces into of pipelines.

If you’d like to see OpenShift.io in action take a look at the introductory video.

The development of the new modern applications has completely change since the advent of the Microservices Architecture Design pattern that many architects have embraced to design and develop their solutions. Such a project doesn't rely anymore to one technology specifically, one framework, one runtime but are designed as a combination of different frameworks (JEE, Spring, Rx or ReactiveJava, ...), languages (Java, JavaScript, PHP, ...) running top of different runtimes which are selected according to their CPU/memory footprint but also modules/features they allow to package "a la carte".

This is the reason why launch.openshift.io has been created in order to give you the opportunity to bootstrap your project's creation base on one of the runtimes supported; WildFly Swarm, Spring Boot and Eclipse Vert.x and using one of the real user experiences proposed; REST endpoint, Persistence using JDBC/JPA, Externalize the configuration/parameters of your application or check the health of your microservice, ...

The project generated could be downloaded as a zip and used in your favorite IDE or added to your Github organization and imported in OpenShift as a new project. Like the Saas OpenShift.io platform, jenkins and CI/CD paradigm is enable out of the box. 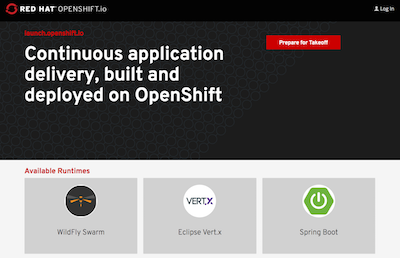 As reported this week by Antoine Sabot-Durand, the Java Specification Request #365 which refers to the design of the specification about the "Contexts and Dependency Injection for JavaTM 2.0" has been approved unanimously by the members of the JCP Executive commitee. The goal of this new spec is to deliver a major update to CDI 1.1 but focused on the following features: define the behavior of CDI outside of a Java EE container & make CDI more modular to help other Java EE specs to better integrate with it. So, this spec will allow much wider adoption of CDI in the Java world, and provide a great stepping stone between Java SE, a servlet container, OSGi and a full Java EE server and will certainly simplify the development of the Microservices !

For those which are interested to discover the document of the specification, you will find the information here

This week sees our annual conference, Red Hat Summit, taking place at the Boston Convention and Exhibition Center with many of the core development teams in attendance.  If you have been fortunate enough to attend the conference then we hope you have managed to meet with many of the developers, attended many interesting presentations and learned a great deal about the projects and products within our communities.  Videos from the conference are already turning up on line via our youtube playlist, subscribe to receive notifications when new videos are uploaded.

One of the big announcements coming from Red Hat Summit covered the release of OpenShift.io, an end-to-end development environment for creating and deploying hybrid cloud services.  Along with the announcement of the release we have a wealth of articles covering

Eric Schabell has been very busy at Summit this week, not only taking time to meet people in and around the conference but he has given 15 minute mini-theatre talks entitled "What are your digital foundations?" and "How to setup a container platform for modern application delivery in minutes" along with a 10 minute DevZone lightning talk entitled "Anyone show you how to install OpenShift Container Platform in minutes?" and a full Summit session entitled "Discover the foundations of digital transformation".

Brian Atkisson has also been very busy at Summit attending many of the presentations and writing up his impressions.  Over the last few days Brian has written articles on the following presentations

Over the next few weeks we expect to see more posts covering Summit, the announcements and presentations and will endeavour to highlight as many as we can through the Editorial.

Have you ever wanted to try out some of the Red Hat products but did not have time to download, install and configure them?  If this is you then you are exactly the person we would like to provide feedback on new Beta functionality we are trialling, working with Codenvy to support the deployment of a JBoss EAP 7 instance running within a browser-based IDE.  The beta launches Eclipse Che IDE, JBoss EAP 7 and the kitchensink quickstart thus allowing you to edit, build and debug applications from within the comfort of your browser.

Evolving Business Rules from your Processes

Business processes often benefit from rules for example using conditional events, sequence flows or executing business rules however they suffer from having the lifecycle of the long running processes coupled to the lifecycle of the shorter running rulesets, until now that is.  With the introduction of a new Business Rule Task and Remote Business Rule Task it is now possible to decouple the rules being executed from the process, allowing the rules to evolve independently of the process.

With the release of Red Hat Container Development Kit 3.0 Beta and Minishift, deploying a JBoss DataGrid client-server application to OpenShift has never been easier.  With a few simple steps Francesco Marchioni takes us from an initial deployment of the CDK, through the creation of a new project to the deployment of JBoss DataGrid and a client application demonstrating how to access the cache.

WildFly gets a Public CI

With thanks from JetBrains, who kindly donated an open source license for TeamCity, the WildFly team now have a public CI system for running integration tests on WildFly, WildFly Core, Undertow and many other related projects and ensures that PRs are tested before being merged to keep the master branch stable.

The latest version of Hibernate News is now out bringing new articles from the Hibernate Community.  Within the newsletter you will find articles covering the use and manipulation of proxy objects within Hibernate, how to merge incoming and existing association collections, making use of the Integrator SPI to access the underlying database metadata, how to correctly implement equals and hashCode and many more.

It may sound like a strange use for CI but why should writing a book be any different from developing code?  There are many benefits to developing a book using CI as Clément ably argues based on his experience of developing a mini-book about Eclipse Vert.x.

That's all we have for this week, please join us next week when we will bring you more news and articles from the JBoss Community ... and May the Fourth be with you