As many are coming back to work after the Thanksgiving holiday, we are seeing a flurry of bog posts and a significant number of Arquillian releases. Read on to find out more...

Back from Madrid JUG and Codemotion Madrid!!

Galder Zamarreño & Thomas Segismont attended the Codemotion Madrid conference. In this post Galder talks about the conference and in particular their talks. These talks covered data analytics using Infinispan-based data grids and streaming data with Infinispan, Vert.x and OpenShift.

AppDev in the Cloud with Financial Customer Evaluation Solution

In this post Eric Schabell shows us how to get started with the Customer Evaluation Demo using the JBoss BPM Suite on OpenShift Container Platform.

Originally started as a Google Summer of Code project by Mincong Huang, Hibernate Search 5.9 will feature integration with JSR 352, "Batch Applications for the Java Platform". This integration provides a new implementation of mass indexing (indexing a high volume of entities) as a JSR 352 job. Read this post to learn more.

It's been a rather quiet week, probably due to a lot of our team getting ready for US Thanksgiving. But there has been some activity and in the spirit of getting something out (release early, release often) ...

The Infinispan and Vert.x teams are in Madrid this week for Codemotion (I hope they're getting better weather than some of us!) If you are in the area then this is a great opportunity to go and see a couple of our teams and give them feedback, learn the roadmaps etc. And even though some of the team are in Spain, they managed to put out an update to the Infinispan/Spark connector, which Gustavo discusses. Plus an update to the C++ and C# Hotrod clients!

As usual, there's the Hibernate Community Newsletter to browse while you're working or digesting turkey! And we've even had a Teiid release, version 9.3.5 this time. Congratulations to the team!!

While I've got your attention I'll take the opportunity to remind you all about EE4J. I've spoken about this before on my blog, but there's been a lot of activity in the last few days as we've started to ask for input on the new Java EE brand name (EE4J is the project, not the brand), as well as moving some specifications and reference implementations across to the project, as you can see from the twitter feed: 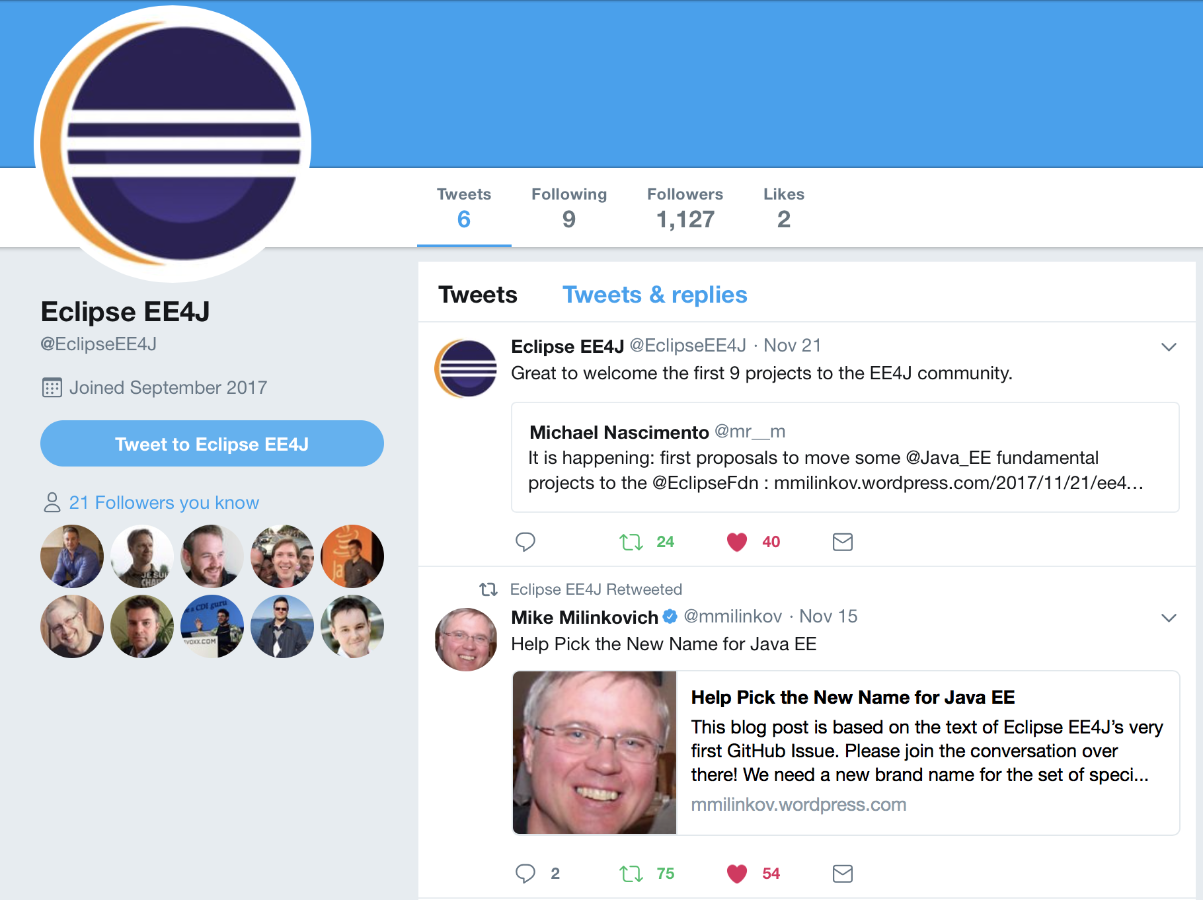 Please take a look and get involved.

OK that's it for this week!

Welcome back to another edition of JBoss Weekly! We’re excited to bring to you news from across the net relating to JBoss Middleware. Those of you who attended Devoxx Belgium, we hope you had the opportunity to speak with our engineers there!

We’ll kick off the editorial with the releases made in Middleware this past week:

As you can see, the Arquillian team has been on a roll this past week! Congratulations to the team and all those who helped to make it happen.

Releases aplenty this past week! A job well done to all our engineers and community contributors, thanks for all the help!

Those of you getting started with Docker and Java, you’ll want to check out Amit Nijhawan’s post about how to deploy Java applications with Docker. It’s a great primer.

React is a great thing, and becoming very popular. Samuel Mendenhall shares a plenitude of advice from rebuilding an Angular app to a React app. It’s a longer post, but if you’re getting started with React, or experiencing some difficulties you’ll want to read it.

If you’re at the point of embracing Java 9 and the new modules system, you’ll be thrilled to know that starting with Red Hat JBoss Developer Studio 11.1 supports Java 9! Eclipse doesn’t have to be running on Java 9, but a Java 9 JDK must be on the build path for the project. JBDS 11.1 offers help to convert to Java modules as well. Read Jeff Maury’s post about the Java 9 support for full details.Lastly, the Red Hat Developer Program has rolled out a new topic about secure programming. We all know security isn’t something to be taken lightly, however, it isn’t always the easiest of things to understand and get right. Lucy Kerner details the current tools on the website. Be sure to read both and get a good idea of what’s being offered and how it can help!

Thanks everyone for another amazing week! We hope you’re prepared for the year-end holidays and hope you have a fantastic week.

As always, last week have seen its fair share of action in the JBoss Community, with multiples releases and many interesting (and technical) content being released, but especially the Debezium project has been going the extra mile to allow to discover their product, crafting a nice tutorial and even providing OpenShift and Docker files to help play with it... So go check it out !

Change data capture with Debezium (and even on OpenShift!)

The Debezium team just released version 0.6.1 of their change data capturing (CDC) tool for MySQL, Postgres and MongoDB (support for further databases is coming soon).  For those eager to try out CDC themselves, there's a tutorial running you through the set-up of Debezium and its required services like Apache Kafka. There are now Docker Compose files for all the supported databases, which make it a breeze to start the infrastructure used in the tutorial and see Debezium in action.

You would like to set up Debezium on OpenShift? Then we got good news for you, too; There are detailed instructions on how to do that available on the Debezium website now. And using Minishift, you can easily try this out on an OpenShift cluster running on your local machine. Development of Debezium is in full swing, enabling many use cases such as data replication, data synchronization between different microservices or updating full-text search indexes. If you got any input or questions on Debezium, the development team is looking forward to hearing from you in the Debezium discussion group.

Teiid - on which the Red Hat product JBoss Data Virtualization is based on, is rather powerful and interesting tool, that is (to my experience) yet to be well spread and understand. So I'm very happy about this new walk through released last week, presenting, in detail, how one set up and consume, in just a few click, a virtual database.

On top of this tutorial, a rather intriguing article on Low-risk Monolith to Microservice Evolution has been released last week, and will certainly allow to go even deeper and farther with Teiid.

Fun with SSL (and Kafka)

In the last few years, with security becoming more and more of concerns (as it should!), setting up Java solution to directly use SSL have been  an increasing practise (oppose to the days when this was delegated to the load-balancer in front of them). In this context, it is nice to have a tutorial, such as this one released last week on Kafka with OpenSSL. But it is even more appreciable to have also an article on how to test SSL set up (and how): SSL Testing Tool. So no more excuse to run insecure services !

If your technical thirst for technical exploration or learning is still not quenched by all of those articles, there still a couple more thing you can explore. First, if you are hookup on Drools and the related jBPM ecosystem, you checkout the Improved KIE Server documentation along with this article on Sub cases for case instance and ... process instance (jBPM). And maybe simply explore the Bean Validation benchmark revisited ?

Eric D. Schabell's 10 Steps to Cloud Happiness series is still ongoing and last week saw the release of Step 5 - Real Process Improvement - certainly a teasing title, isn't it ! Go check it out ! (or catch up on the series by starting with Step 1 - Get a Cloud.

Also, if you are happen to be an Infinispan fan (or just interested by it), see if you can join the upcoming event featuring talks about it: Infinispan coming to Duchess France and Devoxx Belgium !

Enough of Java coding, GC and other JVM madness ? TIme for a break ? Have something else for a little while ? Well let's see what happened last week on the non-Java universe...

If you want learn about infrastructure, especially all the complexity (and power) of a provisioning a environement on a large scale, I can but only recommend this two part article :