In the past week, the JBoss Community has been as relentless as ever - we had new releases, blogs, talks and webinars. So, here are the main headlines.

Data is an asset of critical importance in business computing, and can be stored in various formats and physical representations. Modern business applications reuse and integrate existing data, and using a diverse set of physical sources can be a particularly daunting task. But you can make it much simpler by using Teiid, an open-source data virtualization system that uses abstraction and federation for integrating and querying multiple such sources of data in real-time, without the need for a data migration process. If you work on an enterprise integration project, make sure you check it out. Version 7.5 has been released this week, and it adds a whole bunch of new features and stability fixes.

We mentioned the release of JBossAS 7.0.1 "Zap" in our previous editorial. Since then, JBoss AS team members have blogged about some very cool features that are included in the release, which show why JBossAS 7 is not only powerful but also extremely flexible and developer-friendly.

Meanwhile, in the cloud ...

JBossAS7 has been available in OpenShift for two weeks, and demos and blogs continue to explore its various features. Jaikiran Pai has written an extensive and detailed blog entry about deploying Java EE 6 applications in OpenShift Express with JBoss AS7. A must read and a welcome complement to our series of videos. While Express has taken the main stage in the past few weeks, it is worth noting that OpenShift also provides the more powerful Flex option, which allows you to run applications on your own cloud servers. If you want to learn how to use OpenShift Flex for running Java EE 6 applications, check Pete Muir's latest recorded webcast.

Do you write good code? Show it! No feature is truly complete without the tests that prove that it is truly so. You think it is too hard? The Arquillian project aims to make it easy, whether you want to run tests locally or in a remote container. In fact, because JBoss AS7 is so amazingly fast, testing in a container (embedded or remote) has never been easier - and you can be confident that your production code will be ok, since you ran the tests in the actual environment (or one which functionally similar to it). If you want to learn more about it, you can watch Andrew Rubinger's webinar from last week.

If you are a GWT developer, you need to check Errai, a GWT-based rich web application framework which provides a simple and efficient programming model which includes CDI support and an asynchronous communication model between the server and the client (browser), including support for pushing messages - and many other features. The team has announced the first candidate release for Errai 1.3 this week, which is the start of the final stretch before its completion. Also, if you happen to be in Ottawa, you can listen Mike Brock talk about it at the SummerCamp in Ottawa on the 27th of August.

The TorqueBox project has recently added support for STOMP-over-WebSockets, offering a browser-push based solution for Ruby applications. Bob McWhirter has published a series of posts about it, including a demo chat application. Make sure that you check it out. And if you're at the Ruby Hoedown in Nashville, TN - make sure that you go and see Lance Ball talk about TorqueBox.

Amongst the events of interest in the following weeks:

This was all for this week, enjoy the last weeks of summer - and come back next week for more news.

Summer 2011 has been a crazy productive period for the JBoss team.  This past 7 days have been no exception as the team continues to deliver new capabilities that not only continue to close the gap with closed source offerings but go well beyond.

JBoss ESB is a project very near and dear to my heart.  When the initial team was formed to tackle this very interesting space, they worked hard to create an ESB that t is the synergistic blend of the best of JBoss' many well known innovations - things like hot deployment of the Application Server, the declarative process flow of jBPM and the declarative business rule engine of Drools.

And now there will be a book published by Packt, written by some of the key guys working on the project today - Len DiMaggio, Kevin Conner, Magesh Kumar Bojan and Tom Cunningham.  Congratuations Team!

If you would like an almost concise overview of the capabilities of the JBoss ESB and its supported enterprise version - JBoss SOA Platform check out this demo that I recorded eons ago. 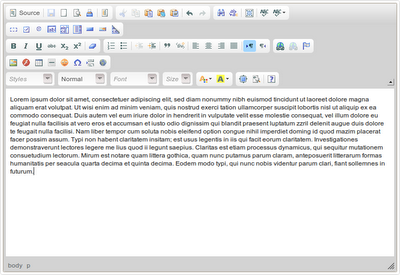 Many new and interesting features and fixes coming from the RichFaces team with their M1 - milestone 1 release of 4.1.

RichFaces 4 is focused on JSF 2.0 and 4.1 M1 adds to the 4.0 release a new Editor (see above), Pick List, Ordering List and a Notify component - make sure to check out the live RichFaces Showcase and details in thehttp://planet.jboss.org/view/post.seam?post=richfaces_4_1_0_m1_release_announcementannouncement.

One of the most notable achievements of the 4.1 M1 release is the contribution by Bernard Labno - a community member who created the Notify component - many thanks Bernard!

Many have seen the release of Hibernate 4.0.0.CR1 and immediately asked "where is Search?" - well great news for the Hibernate community - Sanne Grinovero (our Matrix-like operator guy for the keynote demo) has just announced their plans for Search.    I have always been a fan of Hibernate Search as many years ago I have made attempts at "word indexing" various RDBMSs - now you can easily bring the power of "google" to your relational database records.

jBPM continues to be one of the most popular JBoss projects - it is a perfect example of how open source continues to move "upstack" - beyond middleware for programmers to capabilities that enable the business.  If you have historically thought of us as those App Server and Hibernate guys and have not checked out jBPM5, then you owe to yourself and your next project to review it.  And now it is running on JBossAS7.

Data grids are a key growth area in today's IT industry.  The relational database "bottleneck" with its typical high cost of both hardware and software licenses continues to hamper the creativity of many software & solution architects.  You no longer have to architect your way around an exorbitant license cost problem, nor the performance chokepoints. Infinispan is that next generation of middleware - we demonstrated it with floating balls and it is a key aspect of JBossAS7.

Jesper Pedersen published a nice blog related to Info JCA Infow and the new AS 7.0.1 - JCA is one of the critical pieces to building robust middleware, for the end-user developer of Java EE6 middleware you might only see a few simple annotations - because these guys do the heavy lifting.

Delivery of both AS7 and AS6

JBossAS 7.0.1 aka "Zap" adds some big items like support for MDBs, better JPA integration and ability to pick your own JSF implementation and many, many bug fixes.

JBossAS 6.1.0 addresses dozens of bugs as well as new features like enabling Javassist usage in Weld.  Not everybody has yet had a chance to migrate to AS7 and this release brings value to the many users of AS6.

And just in case you were on vacation last week (around August 10th) and hopefully enjoying some unplugged time - then you might have missed the major announcement of AS7 at OpenShift, bringing EE6 to all, free, in the cloud.

Pete Muir has delivered an absolutely fantastic summary and series of videos to help you ramp up - don't let the Gollum scare you.  :-)

Last tip of this posting...

And if you have a few spare weeks, you might be able to watch all of the great video content that we have hosted at Vimeo - www.vimeo.com/jbossdeveloper.

At this time of year things traditionally slow down in the Northern Hemisphere; folks finish up their tasks and leave for their Summer vacation, have fun and recharge their batteries.  Traditionally, that is, until you consider JBoss and its Community.

JBoss AS 7 and Openshift

Less than a month ago we released JBoss AS 7 (#JBossAS7), the latest incarnation of our application server, but we didn't stop there.  Taking advantage of its blazingly fast startup time (less than 3 seconds), and its exceptionally small memory footprint, we have worked hard, alongside the OpenShift team, to support AS7 Platform as a Service (PaaS) deployments in the cloud.

The availability of AS7 in the cloud, running on OpenShift Express and OpenShift Flex, was announced by Dr. Mark Little in his blog post, "JBossAS 7.0 comes to OpenShift!"

This sounds interesting, right?  You want to know more about it?  Head over to the AS7 + OpenShift page for more information.  You will find lots there, including links to the following posts.

Perhaps you want to see this in action?   Why not take a look at the following demos and see how easy, and quickly, you can create Java EE6 deployments in the cloud.

Or attend the JBoss Platform as a Service Webinar on September 7th 2011, presented by Scott Stark and Tobias Kunze.

Remember to check back regularly as more posts and videos are planned.

Work on Ceylon is still continuing at speed, with Gavin writing another good post on Unary Types and covariance.  Lots of good discussion in the comments.

Need something to do while on vacation?  Want some new toys to play with?  Why not take a look at some of the new releases coming from JBoss?  Two major releases come from the Infinispan and TorqueBox communities, check out

and not forgetting the Hibernate Core, ModeShape and Drools communities which have all anounced their next beta releases

The Newcastle JBug held an AS7 Hackathon this week, a hands on event exploring AS7 and how to deploy applications.  The London JBug will be hosting a similar event (JBoss AS 7 Hack-a-thon) on August 30th.

The Seam 3 team are hosting an online Hack Night in their IRC channel (#seam-dev), 2200 UTC on August 11th.

That's all for this week, enjoy your Summer vacation.