There's not a lot for me to say today other than Merry Christmas! I'd like to take this opportunity to thank everyone within Red Hat/JBoss, our customers, our communities etc. for all of your support over the past year and for your continued support in 2014. I hope everyone reading this has a great festive season and if you don't celebrate Christmas then I still hope you manage to chill out, rest, or just enjoy yourself! If you do want to check out what's going on in the world of JBoss then look at the main JBoss.org blog feed, but normal service will be resumed here in the editorial in the new year!

With that I'll leave you with a festive image for this time of good cheer to everyone! Onward! (To 2014!!) 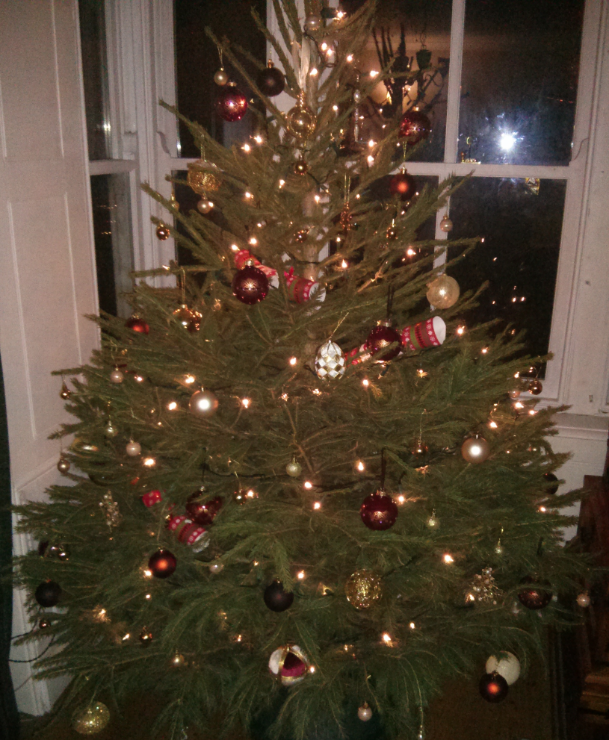 This time of year affords many of us an opportunity to step away from work, enjoy time with our families, relax and even the chance of spending time on those projects that are on our todo list.  If you are still looking for some interesting projects then hopefully you may be enticed by some of this week's goodies.

Arun Gupta has been prolific this week, writing no less than four posts covering WildFly and/or Java EE!

In two of his posts he demonstrates how simple it is to run his Java EE samples on WildFly, all within two popular IDEs.  The first post walks us through the steps that are necessary to enable the integration within JBoss Tools, the second showing similar capabilities within NetBeans.

Arun has also taken time to go through the recently published Devoxx 2-13 Parleys Channel and compile a list of no fewer than twenty videos covering various Java EE topics, including the Java EE7 session he presented with Antonio Goncalves, an interview he gave during the conference and all the presentations that were given by the Red Hat projects.

If you are interested in finding out more information on WildFly and EAP, including how they compare with GlassFish and WebLogic, then register for Arun's webcast on January 8th 2014.

The drools and jBPM teams recently held a workshop in the fabulous city of Barcelona.  Mauricio Salatino has written up a report of the event, including some photographs, details of the workshop and links to the accompanying slide deck.

Eric Schabell, having previously provided a set of demo projects to demonstrate the capabilities of the BPM platform, has now enhanced each of the projects so that they will create 1000 mock instances on deployment.  His reasons for doing so were simple, to provide an easy way of demonstrating the graphical capabilities of the Process and Task Dashboard.  Eric has also created some new demos to give you a taste of the upcoming Business Optimizer capabilities.

The 1.0 release of Ceylon introduced a completely rewritten test module, including support for annotations.  For more information check out Tomáš Hradec's article where he introduces the current test capabilities of the language.

Jakub Korab and Scott Cranton have recently finished their upcoming book, the Apache Camel Developer's Cookbook.  Their book includes a wealth of information using over 100 how-to recipes to show you how to Get Stuff Done.  The book should be published by Packt later this month and is available for pre-order. It's Friday 13th ! Beware ! It's not a time to commit, build or even code... Rather than endangering your business and software, just relax, sit down, and let us walk-through the JBoss related news of the week...

Comes and Play with EE 7

Java EE 7 is out, and it's time to learn about its new features and what to expect in Wildfly 8 ! Fortunately, Arun Gupta and Antonio Goncalves have though about that, and their presentation at Java One on this topic is now available online.

A week in the "merde"

You are wondering where to take the kids and the wife in January ? Paris, France, on the third week, might be an interesting deal for you ! Indeed, on top of the usual beauty of my birth city, Paris will host the JBoss Paris Conference that will be held on the Wednesday 22, and few days after that, on Friday, the first Ceylon Tour Paris... Voulez vous coder avec moi ? (well, I won't be there, but still...)

Discover the new features of Infinispan 6.0.0

Infinispan 6.0 has been out for a few weeks now, and if you were in London last week, you might have been part of the happy few, like me , to attend Mircea Markus talk on those new features. Luckily, the London JBUG  has just released it on YouTube.

It worth mentioning also that Infinispan 6.0 introduces the support for remote querying, allowing one to leverage its integration with Hibernate Search and Lucene, while running Infinispan in server mode. (note that this feature is also already available in JBoss Data Grid 6.2.Beta)

A new minor release for Byteman, filled with bug fixes, but also an opportunity for anybody who has not yet used this fantastic tool for JVM instrumentation to give it a go... Certainly, you have some application, you would like to profile ?

Your application's Web UI is not getting prettier by the minute, and it's time for a change ? It's then the perfect opportunity to checkout the newest release of both RichFaces and RichWidget !

The Arquillian project is certainly true to the core spirit of continuous delivery, as almost each week that passes contains, not only one, but several releases of its numerous components. Having a Friday 13Th in this week has not prevent them to do as usual, and three sub-projects have released new versions:

... And let's take a little peak outside the Java and JBoss universe, where things also moving along quite nicely:

Perhaps the biggest news of the week is Hibernate's new website. Hibernate continues to be one JBoss' all-time favorite OSS projects, while many of you know it for its ORM capabilities, perhaps you did not know about Search, Validator or OGM.   The new website organizes the content in a way that allows newbies to more easily get started while also allowing experts to more quickly navigate to their area of interest. 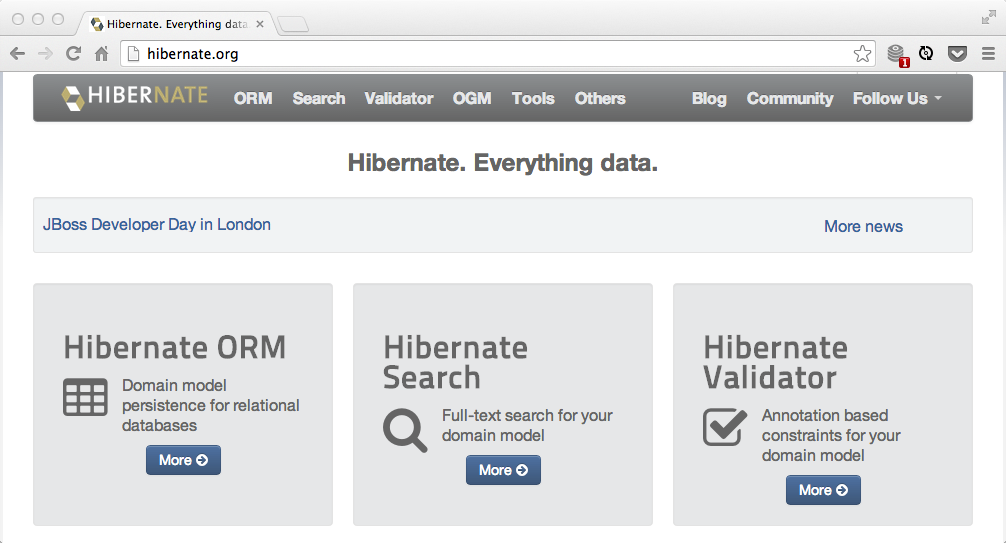 I love the Richard Hamming quote - go check it out

* Arun Gupta will be heading off to JavaLand in Bruhl Germany, I wonder if a German-based themepark/programmer conference will include all sorts of fun references to Grimm's Fairy Tales characters? That could add some fun to the average coder presentation.

If you need to integrate APNS or GCM into your iPhone/iOS, Android Java, HTML5, Apache Cordova/Phonegap apps or simply your web apps you should check out Aerogear

* By the time you read this, Eric Schabell's session entitled What's New in the JBoss Integration & BPM World at the Open Source Conference Amsterdam 2013 will be likely be completed.

Make sure to hit up Eric on Twitter for a look at his slides and he does have numerous video recordings of many of his demos.

A Maven plugin to help you create RHQ Agent plugins - if you wish to extend the RHQ real-time monitoring and management capabilities, well, you need a plugin and now plugins are even easier to create.

* TorqueBox 3 == TorqBox gets leaner and meaner - while the JBoss AS/Wildfly core is already damn skinny, this is going even thinner - and "TorqBox should outperform every other Ruby web server"!

* IntelliJ 13 for Java EE 7 with Wildfly 8 - for those of you who love IntelliJ, please try out Java EE 7 and Wildfly and send us your feedback.