So in this week's entry we have a mixed bag of things to cover with no single focus area - the teams have been working across a number of areas.

OK so let's kick it off with a long entry from Michael Musgrove on the Narayana team about how to evaluate STM implementations. As Mike says at the start of the article:

"Software Transactional Memory (STM) is a way of providing transactional behaviour for threads operating on shared memory. The transaction is an atomic and isolated set of changes to memory such that prior to commit no other thread sees the memory updates and after commit the changes appear to take effect instantaneously so other threads never see partial updates but on abort all of the updates are discarded."

This is the first article in a series so if you're interested in transactions (and let's face it, who isn't?!) keep watching the Narayana blog.

There are a few entries on Hibernate to report on this week. The first from Guillaume talks about how to use Hibernate ORM with JDK 11. Then Yoann announced the release of Hibernate Search 5.6, 5.9 and 5.10. And of course no editorial would be complete without referencing the regular Hibernate Community Newsletter!

Meanwhile Mr Camel himself, Claus Ibsen, has been to JavaZone and has written a report, a photo from which is below! 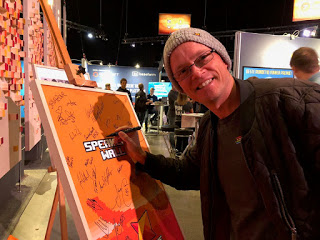 Finally for this week Cheng has written an article on building and deploying containerized Java Batch Applications on OpenShift!

OK that's it for now! See you next time.