May 2015 Previous month Next month

Another week in JBoss. It's been pretty busy and everybody went straight back to work from a long vacation weekend. Now we're gearing up for Summit and DevNation. So, let's see what happened over this last week:

We are hosting a full day event, in central London on June 11th 2015, where we will present the latest stuff we hack on our day time job - that is fabric8, hawtio, kubernetes, openshift, Camel, and more. Eric Schabell published a Microservices Migration Story with JBoss BPM Travel Agency. And you got to learn how to secure microservices with Keycloak. James Strachan showed you what Kubernetes means for Java Developers. A lot more hands-on is Thomas' post about Installing Red Hat Container Development Kit on Mac OS X. He also taught us how to use the Docker Client with the Red Hat CDK. Our own Mark Little published a nice peace on InfoQ about Microservices Premium.

Asciidoctor encompasses and builds an ecosystem around Asciidoc for writing documentation, and well, writing anything. If you want to host your own blog, documentation site, book, ect., Asciidoctor would be an excellent choice. If you want to do that in OpenShift, that is what this post going to help you with. If you're into Hibernate, make sure to check out the great content on Vlad's blog. He recently wrote about How does Hibernate READ_WRITE CacheConcurrencyStrategy work and has a ton of other great tutorials and Hibernate details over there.

Find a new page on all Internet of Things related activities on jboss.org. 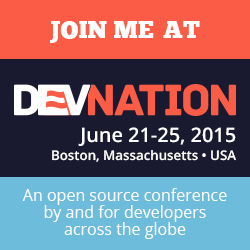 The open source community loves sharing. So do we. Here are some blog badges for you to share. Let everybody know, if you’re attending or even speaking!

Thant's been it for the week. See you again next week! If you have interesting picks we missed, just let us know!

I feel very lucky to be a part of JBoss.  It is great to see global diversity in the JBoss Community.  I wanted to wish everyone a Happy World Day for Cultural Diversity which is celebrated on May 21st and supported by the United Nations.  They have setup a Community Facebook page for "Do One Thing For Diversity and Inclusion".  The campaign aims:

Our JBoss Community is a large global community and I enjoy reading all the wonderful articles, news, blogs, etc that are published during the week.  This week was another great week of news, new releases and articles.  So let's jump into This week in JBoss.

To see the specific Release notes go the the Homepage or Website for the project from the links below.

jgroups-raft 0.2 - The jgroups-raft project is a Raft implementation in JGroups. It is currently in its own repo because it'll move much faster than JGroups and I wanted to have the freedom to release versions in quick succession.

byteman 3.0.0 - Byteman is a tool which simplifies tracing and testing of Java programs.

immutant 2.0.1 Patch Release - Immutant is an integrated suite of Clojure libraries backed by Undertow for web.

infinispan 8 - This actually isn't a release yet but the codename for infinispan 8 was voted upon and is, Infinite Darkness. 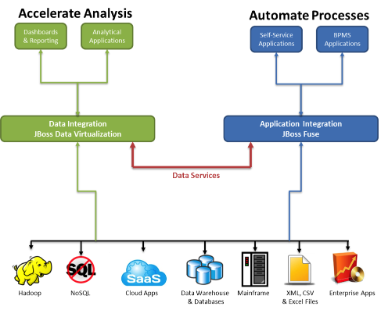 This weekend is a holiday weekend in the US to honor those that have died while serving in the armed forces.   Be safe if you are in the US as alot of people will be traveling on the highways.  On to another week in the community.....

Welcome to another instalment of TWiJB. We've got your microservices, travel, decision, release information and more all here. Let's get to it.

"It's also interesting to think that the move we're seeing in the industry towards separate services is very much in line with what we had back in the CORBA days (something I've repeated a few times.) No, I'm not suggesting CORBA got it all right!".... or is he? Read more to find out.

Let's get our travel on!

Distribution changes -- We're making some changes to keycloak -- read more to find out what the deal is.

DevNation is coming! Be there or be ☐

What happens when xPaaS and DevOps hook up? Christina Lin takes us through part five of this romance.

Unlock the value of SaaS within your enterprise

Using a service such as SalesForce? Integration of two services where one resides outside your domain of control can be daunting but it doesn't have to be says, Ken Peeples.

Ken is talking microservices too

Moving to Data Services for Microservices

Dimitris Andreadis checked in this week to say thanks and share the content on the state of union where Wildfly v9 is concerned.

Validation and Verification for Decision Tables

Toni talks validation and verification with plenty of tips to find common problems and squash them like <ahem> a bug.

In our tips-n-tricks for this week....

April's month is over and May begins with a new edition of the Weekly editorial containing great news around the JBoss Technology World. Take a break, a cup, seat down and take the time to review what has been done by the developers, projects this week. They continue to open the horizons by providing infinite possibilities to design and develop Middleware, Front & back end solutions.

Red Hat has officially announced that they have upgraded their membership to Strategic Developer at Eclipse. This has been announced at Eclipse.org

Strategic Members are organizations that view Eclipse as a strategic platform and are investing developer and other resources to further develop Eclipse Foundation technologies. Strategic Developers commit to assign at least eight developers full time to develop Eclipse technology, lead Eclipse projects and contribute annual dues up to 250.000 $.

At Red Hat we already have more than eight developers doing development Eclipse technology, both at and around the base Eclipse distribution. As a new strategic member, Red Hat will take a seat on the Board of Directors of the Eclipse Foundation, strengthening its support of the Foundation.

Red Hat delivers Eclipse-based solutions to their developer communities, including:

Thanks to Tim Fox to take the time to communicate around the new Vert.x 3 architecture. This v3 will introduce lots of changes and improvements and should become 3.0.0-final release on 22 June.

A new web site has been created to support this platform and is already available : http://vert-x3.github.io/.

One of the big things in V3 is Apex which is a set of components for building webapps with Vert.x and is already proving to be quite popular even before the final release. More info about Apex can be find on the web-site.

Apex has built in support for content negotiation and various other features -most of things you'd find in JAX-RS, but 100% async, and usable from any of the languages that Vert.x supports.

We've also made great efforts to make V3 super embeddable and it has a minumum of dependencies. Here's a Maven hello world app:  https://github.com/vert-x3/vertx-examples/tree/master/maven-simplest

V3 contains some sophisticated code generation technology which means we only have to maintain Java versions of our APIs and examples, the other language APIs, documentation and examples are auto-generated at build time from the Java stuff. This makes it much easier to maintain than Vert.x 2 where we manually had to maintain each language API.

V3 also has some pretty cool Rx support (https://github.com/ReactiveX/RxJava) - if you're not familiar with Rx, it's all about doing operations on asynchronous streams of data using functional style operations. It's one way of mitigating against "callback hell" which can occur when using event based APIs. We provide "Rx-ified" versions of all our APIs - so you now have a choice of whether to use the standard callback-based API (node style) or an Rx-style version.

Hot Stuffs of the week

OSGI is not death and looks like a promising technology for the IoT Gateway platform developed by Eclipse under the code name Kura for the field devices (RaspberryPi, ...). By combining this platform with the Integration Java Framework Apache Camel and its messaging routing engine, we expend the possibilities to interconnect everything, everywhere.

Thx to Henryk Konsek to record this video and share its presentation.