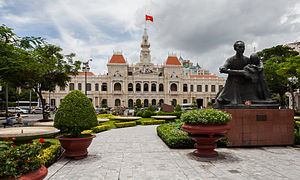 This week I wanted to bring you some Highlights of the Red Hat Technical Exchange (RHTE) that occurred in Saigon, or Ho Chi Minh City, this past week.  Ho Chi Minh City is a beautiful place that is full of history and culture.  The picture to the left is the Ho Chi Minh City People’s Committee Building, which used to be named Saigon City Hall.  It is not open to the public but it is a very popular tourist destination for pictures, especially at night when it is lit up.  The event occurred in the heart of Ho Chi Minh City’s vibrant business and entertainment district on the famous Dong Khoi street at the Sheraton.  Quinten Laureijs did an excellent job organizing the event.  The Asia Pacific Red Hat Tech Exchange is a yearly event for Red Hatters and technology and business partners to catch up on the latest trends in technology as well as best practices. This year's theme was Train (gain and apply knowledge and skills), Share (best practices and experiences) and Enable (your personal and customer success).

During the event Enterprise Products and Community Projects were discussed.  The first half of Monday was devoted to keynotes: Dirk-Peter van Leeuwen on Train. Share. Enable., Sachin Shridhar on Collaboration: key to enabling wins, Mark Little on Cloud, IoT, future of Java, Phyllis Fann and Larry Spangler on Communities Of Practice, Javier Perez on Red Hat Mobile Application Platform, James Labocki and Thomas Cameron on the Cloud, and Harish Pillay on Back to the Future.  The rest of Monday, Tuesday and Wednesday revolved around internal and external sessions.  On Thursday and Friday additional add ons took place for a deeper look at some of the topics: Openshift v3.0 Implementation by Shachar Borenstein, Anuva Ambastha, Red Hat Mobile Application Platform by Hong Hua Chin, Kenny Peeples, and Openstack (Kilo) Implementation by Asaf Waizman, Glen West and the Devops/Agile Masterclass.

Maciej Swiderski gave us a three part series on the Unified KIE Execution Server.  He has more planned so stay tuned.

Barbora Suchanová discussed Windows 10 app with integrated Keycloak OAuth 2.0. Team Aerogear provides many useful libraries not only for Android, iOS and Cordova. They developed OAuth2.0 Nuget package for Windows Phone platform enabling user to easily authorized through Google, Facebook and even through Keycloak.

This week I discussed Node and Mobility at the Tech Exchange.  I provided a workshop where you can learn about Git, Javascript and Node along with an example of Node connecting to Cloud Data Services.

Galder Zamarreño continued with the blog series on the experimental Functional Map API which was released as part of Infinispan 8.0.0.Final. In his blog post he focused on how to work with multiple entries at the same time.

Now that Infinispan supports Java 8, William Burns discusses taking advantage of one of the new features.  He introduces for Infinispan 8, the feature Distributed Streams!  This allows for any operation you can perform on a regular Stream to also be performed on a Distributed cache (assuming the operation and data is marshallable).

I walked through a real world example of combining Product Code and Name from Salesforce and Product Code and Price from MySQL in a Virtual Database.  We also use the WebUI to build the data services as well as use Red Hat Mobile (Feedhenry) as a consumer along with the dashboard. Although the demo is built on Openshift the same demo can be done on premise.  You can find the steps and references here.  Some of the material came from the excellent Mark Drilling gave on the WebUI.

This week in Integration

Thomas Qvarnström discussed Scalable Integration with JBoss Data Grid and Fuse and points to the demo he and Christina Lin have provided everyone. By combining the agile, lightweight, Enterprise Integration pattern (EIP) based integrations using open source technology with scalable in-memory storage, it’s possible to achieve near linear scalability and boost performance of your integration services. If you want to learn more Christina and Thomas published the demo using JDG both for Claim check and for Publish-subscribe on JBoss Demo Central here.

Christina Lin discussed process and integration routes.  People often confuse when they look at camel route and BPM process, although they do look very similar as connecting different nodes with conditions and passing objects or messages, the way they are structured and engineered to execute is a complete different story.

BRMS and BPMS this week

Eric Schabell gave us the 7 Steps to Your First Process with JBoss BRMS Starter Kit. He has even scheduled the digital sign for the next few weeks.  The next time you are in a Red Hat office somewhere in the world, keep your eyes peeled for the digital signage that is displaying all manner of news.

Maciej Swiderski discussed a very powerful feature of BPMN2 in jBPM 6.3 which is signaling.  It is realized by throw (send signal) and catch (receive signal) constructs. Depending on which type of signal we need it can be used in different places in the process.

Looking forward to this coming week in the World of JBoss.........