OK so many of our American friends and colleagues will probably be slowly digesting their turkey dinners so this is a great time to give you and them something to read. Let's start with a bang! 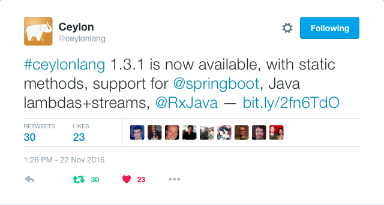 Yes, the Ceylon team have released 1.3.1 which, as this blog recounts, is much more than a micro release! You should definitely got and check out the article and the release itself.

Next up, and Ceylon has a play here as it's also available on OpenShift, is the recent xPaaS announcement around Data Virtualization. This marks an important milestone for our products on OpenShift, where we have containerized runtimes of all our Middleware solutions available for our customers, while we continue to evolve the experience around using the products. That means that today our customers and prospects can run:

And we're not only just 'making these products available on OpenShift'. As important as enabling the products for such a scenario, we manage the lifecycle of all the dependencies for those products, and that greatly reduces the operational burden that traditional middleware imposes. Congrats to all of the teams involved!

On to the rest of the week and we've seen lots of projects release. These include Keycloak, Hibernate Validator, Hibernate ORM, WindUp and Forge. Finally, one important article to shine a light on is Claus' trip report from his adventures at ApacheCon (and this time his luggage appears to have gotten there and back without incident!) Some nice photos as well!

OK, that'll do for now. Plenty to read about while that turkey digests! See you next time!