Welcome to another week of fun and projects from the wonderful world of JBoss.org! Thing have started to heat up in the project releases, with a pretty big list of announcements below. Events are picking up and there is enough to read about so let's get to it.

There was some serious JBoss action going on in Rome, Italy this week at CodeMotion 2012 with several talks on JBoss and OpenShift technology. Mircea Markus describes just getting back from Codemotion.it and Eric describes his Codemotion 2012 Rome OpenShift Primer Adventure.

OpenShift will be show cased at JUDCon 2012 Boston - talk accepted OpenShift state of the Union by Eric D. Schabell.

Infinispan is on the road again, with Galder Zamarrino bringing Infinispan to the Alpes JUG!

Something a little bit out of the ordinary, you can win a free copy of the JBoss ESB Beginner’s Guide, check it out and take a chance on becoming the proud owner of your very own guide!

This week there is a wonderful diversification of projects and technologies that have take the time to report back to us on their latest creations, announcements and goings on. Here we start with the Drools & jBPM: Guvnor which has introduced an improved default value handling.

The Errai project announced both new version releases below and the first part in a series, Errai IOC: DI in the Browser (Part 1), check it out. Furthermore, PicketLink has now added PicketLink console extensions.

Not only was the JBoss Tools team busy reporting to us above from EclipseCon 2012, but they have pushed the m2e-wtp project into a full fledged Eclipse project. Check out the ins and outs of moving m2e-wtp project to Eclipse.

Over on Mobile Tech and Stuff, we take a trip through Cordova, a look at the Apache Cordova project.

The JBoss TS team provides an update to STM API over on their blog.

JBoss is working its next generation integration layer in the SwitchYard project and brings us some BPM news by introducing the SwitchYard BPM Task API.

Thinking of getting involved in a JBUG?

Setting up or running a JBoss User Group? Follow @JBossNews on twitter and catch the next event online especially for you and your group: Switchyard webinar.

Have a great week, weekend and contribute to your favorite JBoss project!

The Arquillian Team likes to extend an invitation to all developers and speakers within the Java landscape to join their in a submission for the JavaOne 2012 Community Keynote this October in San Francisco.

In this interview, Keith Babo, the SwitchYard core developer introduces this new exciting product which will play an important role into the JBoss SOA Platform.

Rich has published the the majority of the questions that came up during the BETA webinars last week.

The Future of XTS

Paul shares his thoughts where the team should be taking the project over the next few years.

Errai Marshalling and the Builder Pattern

The second part about the Errai Marshalling framework and its facilities for working with immutable types.

This is the second official release of the Ceylon command line compiler, documentation compiler, language module, and runtime, and a major step down the roadmap toward Ceylon 1.0, with most of the Java interoperability fully specified and implemented.

"It's probably the biggest bug squashing fest since I took over the project." 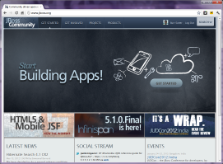 Hello and welcome!  We have been insanely busy for the last two weeks and managed to miss an editorial publication.  :-(   We will endeavor to be better about our scheduling.

Big changes to our various web properties have been made recently - specifically related to jboss.com and jboss.org - JBoss.com has been folded into redhat.com and hopefully all your previously bookmarked URLs are being redirected properly.  Leave us a comment if you feel there is something we missed.  In the case of jboss.org - it has been relaunched with a new, more engaging front page - where we are making it much more obvious how to get started with building applications using various JBoss technologies.

jboss.org has historically been much more of a community OSS site where contributors, both internal and external to the organization, have been able to collaboratively work on some amazing technologies over the last several years.   However, we realize that we had an under-served userbase - developers whose primary focus was to build business applications on middleware, not necessarily build middleware itself.   For that group, we have developed and launched a new microsite of www.jboss.org/developer.  Our initial efforts have been around getting you started with HTML5 and mobile web application development and easy deployment to Openshift.  And that leads me to another major delivery.

This week we gave birth to JBoss Enterprise Application Platform 6 Beta - based on jboss.org's application server v7.1 and we also shipped JBoss Developer Studio 5 Beta 1 to support this new Java EE 6 offering.   The bottom line is, keep you eyes on www.jboss.org/developer - more tutorials, more videos and more examples will be coming soon.

Well that is all I have for now - JBoss has been extraordinarily active already in 2012 and the pace is quickening - more innovations, more presentations and more community.

If you are one of the lucky few who managed to score a ticket to DevNexus 2012 in Atlanta, please find me and say hello.

Another week goes by and the productivity and diversity of JBoss and its Communities continues to be demonstrated through their numerous articles and releases.  What better way to keep up with these events than by reading your Weekly Editorial.

The recent release of JBoss AS 7.1 continues to spur postings from those who are working in related areas.  This week is the turn of Max Andersen who has written a series of posts describing the AS features that he has been more closely involved with.

"What am I excited about?" introduces the series and explains how to work around the one issue which may surface if you are trying to get JBoss Tools 3.3 M5 to work with AS 7.1.  The series continues with a discussion on "Deployable Datasources" and "Developer Friendly Security" before finishing with his last post entitled "Quickstarts Frenzy".

If you have been following what has been happening within the Ceylon community then you will already be aware of the tremendous advances they have been making over the last few months.  Recently they have taken another big step forward in enabling interoperability with Ceylon and Java.  Take a look at Gavin's post, "Trying out Ceylon's Java Interop", to discover what is now possible within the Ceylon language.

In "Measuring Risk via Community Health" Mark Proctor discusses some of the concerns which surface when deciding to adopt new technologies and how confidence can often be gained from looking at the health of the communities behind the technologies.  He also found time to post a video showing how to build a graphical game in 20 mins using Drools; who said that you couldn't have fun with rules engines?

Geoffrey has already demonstrated how Drools Planner can be used to solve problems such as "The Travelling Salesman"; now he turns his attention to another common problem, the scheduling of an employee roster.

The ability to marshall objects within GWT presents the developer with particular challenges that are not encountered within java.  In "Errai Marshalling: Good for Immutable Types" Jonathan Fuerth describes an Errai solution to the problem, demonstrating how to marshall mutable beans, immutable beans and handle creation through the use of the factory method pattern.

Richard Kennard has recently been working with the AeroGear team on a "proof of concept" which aims to integrate JBoss Forge and Metawidgets, enabling the development of mobile applications based on POH5 and JQuery.  Take a look at his article to find out where things currently stand.

The BoxGrinder team have recently been investigating the changes which are necessary to support BoxGrinder over three Fedora releases (15, 16 and 17).  In "Preparing for Fedora 17", Marc Savy describes some of the issues that were discovered and how they managed to address them across the different releases.

Infinispan out and about

The Infinispan team will be giving a number of presentations over the next few weeks, spreading the word on Infinispan and its capabilities.

Manik is currently visiting the US and will be presenting at the Wisconsin Java User Group, on 1st March, followed by visits to the Chicago JBUG on the 5th of March and the DC Area JBug on 14th of March.

Mircea with be at CodeMotion in Rome, presenting his "Infinispan in 50 minutes" talk on the 23rd of March.  He follows that with a visit to Miracle Open World, being held in Billund, Denmark between 18th-20th April, to give his presentation describing how Radargun is used to help measure Infinispan's performance.

Galder will be staying closer to home, presenting "Infinispan and Datagrid" at Alpes JUG in Grenoble on the 29th of March.

The 8th of March sees the Drools team arrive in London for a full morning of presentations on Drools & jBPM technologies.  Take a look at the agenda and sign up before all the places have been taken.  Remember, spaces are limited.

Another busy week for the projects with numerous releases appearing in the usual places.

That's all for this week.  Check back next week for more information about JBoss and its vibrant Communities.