Summer vacation is well underway, but innovation and creativity never take a break. So, while this period is surely much more quiet than the rest of the year, we can still enjoy delivering you great news about the latest developments in the world of JBoss. So, what happened in the last week?

The developer community is at the heart of every project in the JBoss portfolio, and it is the time now for it to award some of its members for the contributions in the past year. While voting has closed this week, stay in touch with us for the results of the vote and join us in congratulating the winners.

Gavin King has posted an update on the status of Ceylon M6, highligting a few of the upcoming features - while the milestone release may arrive later than initially expected, the extra time spent refinining the functionalities of the language is worth it!

The convergence of data stores

Shane Johnson writes about a new trend in the world of Big Data: it is harder to draw a line between different data stores, and group them in the traditional categories of data stores, NoSQL databases, etc., the new generation of data stores are more integrated, borrowing characteristics and features from each other.

You've read them as they were published, but now Shane Johnson has summarized his not-quite-a-comparison-of-Spring-and-Java-EE series of posts here. While the debate, as old as enterprise Java, rages on, it is important to remember that there's a deeper meaning behind labels and oversimplification does a great disservice to the correct understanding of the technology landscape. Shane's post helps a lot in clarifying that.

LESS is more (for Errai)

Often overquoted, "less is more" is very true with respect to the latest developments of Errai. In his blog, Erik-Jan de Wit describes the newly added support for LESS in Errai, which will be part of the upcoming 2.4 and 3.0 releases, adding better support for modern UI design in Java EE-powered applications.

Jaikiran Pai has posted a detailed account of the "single open port" feature of WildFly, which builds upon Undertow's HTTP Upgrade support. A single port of communication eases the operations part of runing an application server a great deal, as it greatly simplifies the setup of administration (think firewalls, vertical clustering and so on). A direct application of this principle is the newly added support for EJB invocations over HTTP.

Tim Bish has blogged about a new feature of the upcoming ActiveMQ 5.9 release - based on last acknowledgement time.

Stian Thorgersen has published a post that contains a brief description and a number of reference points for getting more information about GateIn's Java API. Another important recent enhancement to GateIn was the addition of new CDI scopes, reflecting portlet-specific actons. Ken Finnigan writes in more detail about it here.

Welcome to this weeks JBoss Editorial, where you will find this last weeks activities and events around the JBoss Community. We are all in the middle of our Summer Vacations, right? Enjoying the summer fun wherever you happen to be.

Well the JBoss projects and core developers have still been hard at work and we even have had sightings of JBoss high in the French Alps, more on that later as we have to share the news first.

Mark Proctor posted a paper and presentations from RuleML 2013.

Heiko Rupp talks about the RHQ plugin generator this week.

Brian Leathem from the RichFaces team walks us through a security advisory fix they implemented.

Ken Finnigan enlightens us about the new CDI scopes that have been added to the GateIn project.

Shane Johnson continues his expose on Java EE or Spring Framework with installment #6.

Stéphane Épardaud talks about the Ceylon IDE improvements that were pushed out this week.

Finally, just to share some Summer Fun, in the French Alps this mysterious JBossian was found cycling up the famous Tour de France mountains. Nice to encounter JBoss at 1700m! 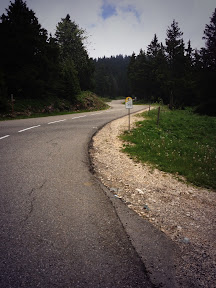 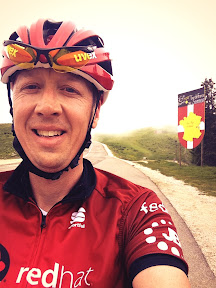 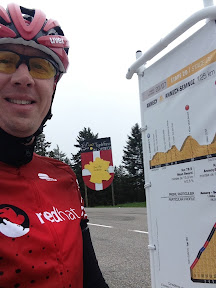 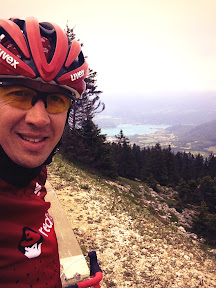 I am sure many of you are enjoying some warm July vacation time, hopefully you are still reading these blog posts and tweets on your mobile device at the beach!  :-)

Mobile Screencasts:  While many of the JBoss team are taking some much needed downtime after the ramp up for Red Hat Summit, there are still key members of the overall team cranking out some great stuff.  I love the new screencasts created by the GateIn team to show off some of the new mobile capabilities.   Check out this blog post or if you want the direct access to the videos then check out www.vimeo.com/jbossdeveloper.   We have 181 videos published and this is a great resource for digging into JBoss technologies.

CDI + JSF in your Portlets:  Ken Finnegan blogs about the new edition of the Portlet Bridge, where you can build JSF pages, leveraging Java EE 6 dependency injection and use them in the portal container.   In addition, you can use CDI for injection directly into your non-JSF-based portlets.  Check out Ken's blog demonstrating the simple @Inject code.

Well, the CapeDwarf is back from vacation and if you have a need to create portable Google App Engine to Java EE-based apps then this is the project for you!  Even Gartner is talking about our CapeDwarf project - vendor lockin (even by Google) has never been popular so make sure to check it out.

Wise on OpenShift: Wise is an awesome tool for the dynamic invocation of SOAP services and now it is available for the public to use at Openshift.   I just tried it out for stock quotes and "RHT".

Java EE vs Spring: The first rule of fight club...Shane has crafted some interesting rules for having the Java EE vs Spring smackdown - heavy vs light, real standards vs defacto standards and monolithic vs modular.  It is a fun read and I encourage you to go check it out.

Voting: is currently open for the 2013 JBoss Community Recognition Awards.

Please vote for your favorite contributor and/or contribution.  Just reading through the notations is very valuable even if you do not recognize any of the names from forum postings, blogs, wikis, jiras or in the codebase.  A special thank you to all of our community contributors that make the open source ecosystem so vibrant and exciting!

Demo: In case you missed it, the JBoss team pulled off another live demonstration leveraging Vert.x, TorqueBox, Immuntant, Aerogear and OpenShift - a polyglot, real-time push notification-based application.  The demo starts around minute 25 - http://www.youtube.com/watch?v=mjT-pMCkkTY

My Hitchhiker's Guide to the JBoss Galaxy 2013 slides are at

http://jbossgalaxy-html5.rhcloud.com/ - leverages Reveal.js and if you have a Leap Motion - you can "swipe" your way through the slide deck.

Created to defend the software galaxy from bugs

Because Getting Started S^@%$

In addition to all of this release activity there were numerous blog postings over the last couple of weeks, I encourage you to try out our aggregated feed at

http://planet.jboss.org/feed/all - I recently started monitoring via FlipBoard as seen in the following screenshot - give it a try and you are always welcome to send me feedback via Twitter @burrsutter. 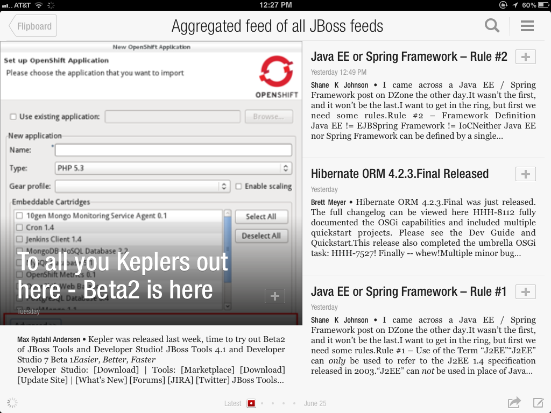