As September reaches its end, we give you more editorial leading with the welcome return of the JBoss Asylum podcast,  followed by an in-depth article from James Strachan on how to set up and use both Docker and Kubernetes, but, for once, from a point of view of a Java developer. And a busy one, with little precious time to lose on this...

Return to the Arkham Asylum 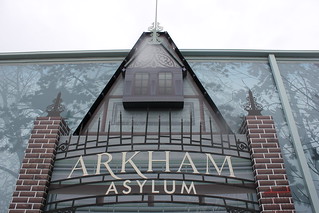 The JBoss Asylum podcast is back ! Well, it's back for what appears to be its now yearly release schedule JBoss Community Asylum - I git your flow. Whatever the release frequency is, we'll take it as this is still an excellent podcast to listen too ! In this episode, Emmanuel, Max and co took the time to revisit an interesting topic: workflow with git.

This has been the topics of many talks in the early 2010's - I know that for a fact, as many of my own talks were about that at the time - and it is very interesting to see what have come out it, several years afterward, now that the adoption of Git and Github, has become massive (at least in the JBoss ecosystem, if nowhere else).

And, of course, as always with git, the episode will reveal some nefty little nice tricks... Along with the return of a debate that never becomes old: tab vs space !!!

A Java developer guide to microservices with Docker and Kubernetes

James Strachan is one of core developer of fabric8, and thus a very busy person. However he took the time to write up this very nice guide : A busy Java developers guide to developing microservices on Kubernetes and docker - which covers, in a few words, how to setup and use both Kubernetes and Docker, but from a Java developer standpoint. If somehow, you managed to escape the Docker and Kubernetes frenzy up to this point (How did you managed do that ? Are you living on a rock in the ocean ?) this is a perfect article to catch up in no time...

Announced already a couple of weeks ago, the Microservices Journey with Apache Camel is happening next week. A friendly reminder, in case you happen to be around and available. And if you missed the latest session of the Scotland JBUG, Eric D. Schabell will catch you up with his Scotland JBug Recap - An evening of Cloud, Containers, BPM & more.

Another Google Summer of Code just went by successful as always, and features among the most intriguing experiment, this integration between Drools & Minecraft ! An original one, to say the least, where the business engine is used to declaratively define the game's logic.

First of all, the previous Google Summer of Code news was not the only news on the Drools front : an interesting article has also been released on: Improved container handling and updates in KIE Server. Go take a look ! On another front, Hawkular, Heiko took the time to write a nice summary on how the framework handles Computed metrics for HawkFX.

The Hibernate ecosystem is as always thriving and if you want to know more about it, just checkout this month's newsletter: Hibernate Community Newsletter 19/2016. Not far from the ORM business, lays the world of data virtualization, and its lead project: Teiid. The project has indeed a major change coming its way - albeit not technical: Teiid Licensing is going to change (following the trend of other JBoss project, to a more permissive license).

Let's go now to a completely different universe. If your Java is often flavored by some JavaScript on the side, you may find this article on Checking Dependencies with SZero quite interesting.

Last item on this section, an other interesting tutorial from Eric D. Schabell : Installing the Red Hat Container Development Kit 2.2

. Well, all of this should keep you busy for while, shouldn't it ?

No releases this week !!! Incredible ! That's the first time, since I've started writing those editorial, that it happens ! Well, don't worry, they'll be back next week !