It been quiet this week, because many people did attend JBoss World and JUDCon in Boston. Nevertheless we've got some important news regarding our application platform and the integration and BPM products.

EAP 6.0 on OpenShift!
It hasn't been that long since we announced the availability of EAP 6.0 and I'm really please to make another related announcement: EAP 6.0 is now running on OpenShift! If you want to get your hands dirty right away, check out Andre's article how to work with JBossTools and OpenShift. JBoss Tools for OpenShift offers a feature complete environment to work with OpenShift. From developing to deploying, JBoss Tools provides you a fully fledged environment for your project and aligns with the standard workflows within Eclipse.

Shane did publish a response to a recent Oracle blog post published about the release of JBoss Enterprise Application Platform (EAP) 6.

Welcome FuseSource to the JBoss family!

Red Hat has done a number of acquisitions over the years, including JBoss and Gluster. Well it's with great pleasure that for us to  announce another: FuseSource. You can find the official press release here.

Ceylon M3 and Ceylon IDE M3 released!
Ceylon M3 "V2000" is now available for download, along with a simultaneous compatible release of Ceylon IDE. The compiler now implements almost all of the language specification, and Ceylon now fully supports both Java and JavaScript virtual machines as execution environments. The first three Ceylon platform modules are available in Ceylon Herd, the community module repository.

Well hopefully you don't need this blog to tell you the major stories of the past week! EAP 6.0 and the JBoss Data Grid 6.0 are out! As I said in my announcement blog for EAP 6.0:

"The feedback we've received since the first community releases has been overwhelmingly positive, as has the early access feedback. And we've even managed to find time to put it on to OpenShift, where it has been successfull as well! I'm confident that we'll build on this success as we move forward with point releases for EAP 6, other products that will be based on EAP 6 and of course, slightly longer term, EAP 7 and beyond! After having seen how well we've worked as a unified team (engineers, QA, docs, support, product managers etc.) I don't think there's much we can't do if we set our minds to it!"

It really has been a monumental effort! And with JDG 6.0 we enter the supported NoSQL/Big Data space, which is another huge achievement! In fact this week could be called the "GA Week", because Max just announced the availability of JBoss Tools 3.3 and JBDS 5.0! There is way too much good stuff in JBDS 5.0 to summarise here, so you should go read the blog entry. And some nice pictures might encourage you to do so 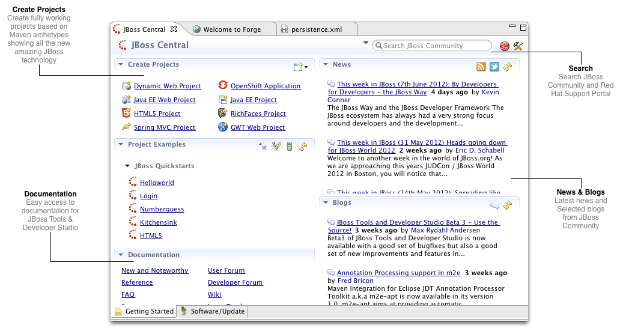 And of course we've had our usual slew of project releases, including BoxGrinder 0.10.2, JBossOSGi 1.1.1 and IronJacamar 1.1.0.Beta1. Amongst this flurry of release activity the team has also had time to discuss a few things going on elsewhere. For instance, Jonathan Halliday talks about the problems with trying to fake transaction semantics, something which we see a fair bit in some NoSQL/Big Data solutions out there (fortunately not ours, of course!) Andy Miller is giving his regular performance slot at JBossWorld next week - I'm sure it'll be packaged as usual! And Hardy talks about Hibernate OGM and the kitchensink example - yet more on NoSQL! Finally congratulations to Mark Proctor and the team again, for another sell-out world tour!

OK so there you are. A whistle-stop tour of JBoss activity this week. Next week is JBossWorld/Red Hat Summit, so you can expect a lot more announcements and things going on. If you haven't registered then there's till time. And of course we've got JUDCon at the start of the week so you should definitely come to that too!

After last week's announcement of the JBoss Way - things are a bit quiet this week. We are gearing up for the annual celebration of all things Red Hat and JBoss: JUDCON + the Red Hat Summit and JBoss World, to be held between June 25-26 and June 26-29 in Boston. If you can make it to Boston, don't miss either!

Until then, you can learn more about the future of the platform from the JBoss Enterprise Application Platform Ease Into Cloud Virtual Event scheduled next week, on June 20 - a click away, we're virtually there.

A critical part of the JBoss eco-system, JBoss Tools and Developer Studio has reached its first Candidate Release, and like each of its previous iterations, contains a number of significant improvements and critical new features - in areas like JBoss AS7 management, OpenShift, Maven and BrowserSim (an indispensible tool for mobile applications developers). Read everything about it as Max tells it all here.

Francesco Marchioni continues his excellent series of tutorials with a couple of data-related examples, both extremely useful when migrating existing applications or using existing data with JBoss AS7. A first post shows you how to migrate datasource definitions from AS4/5/6 to AS7/EAP6. Next is a primer on database reverse engineering using JBoss Forge. This is another critical feature that shows how you can benefit from the rapid development capabilities of JBoss Forge in an existing project.

Are we doing the right thing at all?

Lincoln's tries to answer this question, in an awesome post, showing his excitement about the way in which different JBoss technologies try to put an end to technological fragmentation, and create easy-to-use, seamlessly integration technical solutions.

Mircea Markus and Sanne Grinovero share their impressions from Berlin Buzzwords 2012 - a lot of good stuff going on, especially if you take an interest in data management (storage, search, scale).

Meet the Drools and JBPM team at JBoss World

As announced by Mark Proctor, the Drools and JBPM team will have an all-day drop-in centre and codeathon on Friday June 29. So if you're around the conference and take an interest, drop in (you don't have to have summit tickets to take part).

Secrets of the RHQ

We often talk about development, but operations is an important part of enterprise application lifecycle. Here is where tools like RHQ become important. RHQ provides administration, monitoring, alerting, operational control and configuration in an enterprise setting with fine-grained security and an advanced extension model.

So the RHQ team has added a few interesting posts: Heiko Rupp blogs about the newly added support for JSONP in RHQ, and John Sanda talks about modeling metric data with Cassandra.

The JBoss Way and the JBoss Developer Framework

The JBoss ecosystem has always had a very strong focus around developers and the development process, helping to forge the communities that support each of the JBoss projects.  This week sees the launch of two sites, The JBoss Way and the JBoss Developer Framework, which aim to strengthen this ecosystem by providing a wealth of information about the technologies that combine to form the JBoss Enterprise Application Platform (EAP) 6, JBoss Developer Studio (JBDS) 5 and JBoss AS 7.  The sites promote awareness of these technologies and provide developer focussed, educational material in the form of numerous quickstarts, videos, articles, migration guides, maven archetypes and screencasts.

If you are after information on a specific technology or use case then be sure to check out the quickstarts, each of which has a narrow focus, or if you are looking to explore a more complex example then check out TicketMonster to see how these technologies can best be combined.

Don't forget that this is a community effort and you can also get involved; check out Pete's announcement for more details.

Kris has posted a brief introduction to the new BPMN2 editor being developer at eclipse.org, now covering all the BPMN2 process constructs including the few custom jBPM5 attributes.  Check out Bob's screen casts to find out how to install the plugin and how it can be used to create an example process.

If you are interested in helping to translate Guvnor into different languages then you will be interested to hear that the team have recently migrated across to Zanata.  Michael has more details on how you can join a translation team and help out with the translation efforts.

Drools Planner both in and managing the cloud

If you are interested in running Drools Planner in a cloud environment then Eric has already done the work for you, providing a project which can be deployed to the cloud in minutes.  Running on OpenShift is free so give it a try and let him know what you think.

Now that you have seen Drools Planner running in the clouds why don't you take a look at how it's power can be utilised to manage the scheduling of resources within a cloud environment?  Geoffrey has created a comprehensive quickstart to show how easy it is to use Drools Planner to optimise the distribution of resources, walking you through the development process from the initial description of the problem to the final implementation of the solution.

Lukáš Petrovický has provided some more additions to Drools Planner in order to enable Matrix benchmarking through the ability to combine different value sets.  Geoffrey has some more details about the inclusion and how it can be used to simplify the execution of these types of benchmarks.

Do you know anyone who has an interest in Mobile development?  Would they be interested in joining the JBoss team?  If so, Jay is looking to expand his team and has multiple positions available.

This has been a quiet week for releases, with most teams busy preparing for the upcoming JBoss World in Boston, but we do have some goodies for you to play with

- Arquillian Core 1.0.1.Final has been announced by Aslak

- GateIn 3.3 has been announced by Julien

- Red Hat Summit, JBoss World and JUDCon will soon be held in Boston, from June 25th to June 29th.

- There will be a jBPM workshop held in New York on June 19th.

That's it for another, albeit quiet, week.  Check back next week to catch up on news from the JBoss Community.