We're a little late with this editorial review, but then we have been fairly busy. For a start, we've just announced the dates for the first APAC JUDCon, in Bangalore!If you haven't been to a JUDCon before then you can check out the previous events we've held in the US and Europe. Hopefully these will convince you to either submit something for consideration of the program committee, or register to attend. If you're interested in JBoss, (and let's face it, if you weren't then you probably wouldn't be reading this entry!), then JUDCon is the place to come and hear what's happening and help shape it too.

Another hugely significant announcement this week was from Max and the JBDS team, with the aptly named Shift Happens, 3.3 M4 release.

As Max describes, when you first start it up you'll see the new JBoss Central "dashboard", which includes quick links to access common things such as the quickstarts, as well as the JBoss blog roll. 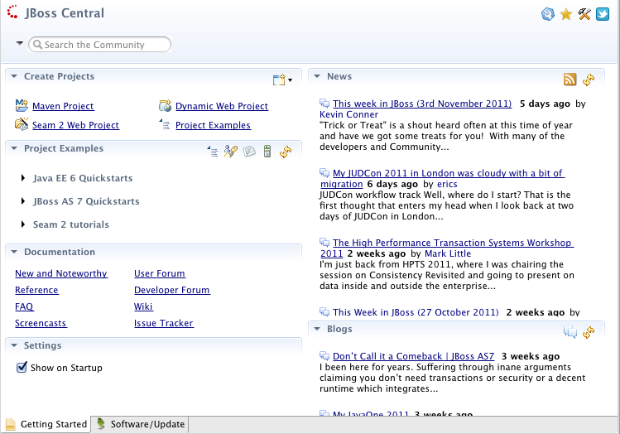 But probably the biggest addition to this release is integration with OpenShift, so now you can develop and deploy directly within JBDS. Other new things in this release include Richfaces 4, colourised Forge, and improvements to JBoss OSGi integration. Lots to check out!

There was quite a lot of transaction-based discussions this week too! First we had Galder from the Infinispan team talking about locking improvements in the 5.1.0.Beta4 release. As he puts it: "A hugely important lock acquisition improvement has been implemented that results in locks being acquired in only a single node in the cluster. This means that deadlocks as a result of multiple nodes updating the same key are no longer possible. Concurrent updates on a single key will now be queued in the node that 'owns' that key."

Then Mircea talked about the single lock owner feature in Infinispan: "The basic idea behind it is that, when writing to a key, locks are no longer acquired on all the nodes that own that key, but only on a single designated node (named "main owner")." If you read the entry from Mircea and the associated wiki page, you'll learn about how this can improve the performance of your Infinispan applications. He also wrote about how, if you're using pessimistic concurrency control, Infinispan will re-order your lock acquisitions to automatically avoid/reduce deadlocks. Very nice! In fact Mircea had a pretty busy week all told, with yet another blog entry on pessimistic transactions which were added in the 5.1 release.

Finally Jonathan had a few things to say about Spring and JPA configuration. In general people go to extremes to try to remove the need for transactions from their applications without actually understanding what it is that they're doing and how, at least in this case, they end up having done a lot of work for no good reason at all! I won't summarise the posting because it's well worth a read. However, it is worth quoting this: "You probably should not bother to invent a better mousetrap until you've determined that current mousetraps don't catch your mice. The imposed cost and complexity are definitively unnecessary."

OK, so that's it for this week. Hopefully you found this summary useful and we'll try and keep on schedule for next week